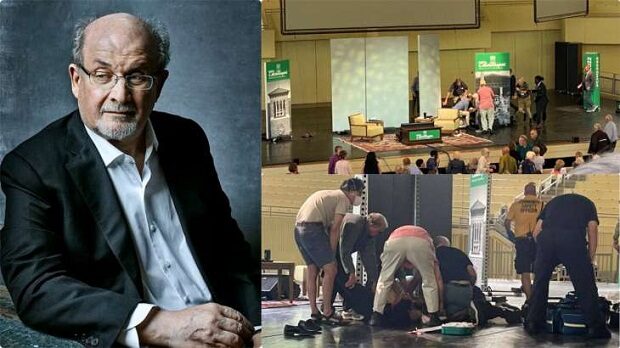 Salman Rushdie on ventilator, likely to lose eye after stabbing

BRITISH author Salman Rushdie, whose writings have made him the target of Iranian death threats, was on a ventilator and could lose an eye after he was repeatedly stabbed at a literary event in New York state yesterday.
Following the attack just before 11am local time Rushdie had been airlifted to the hospital where he needed emergency surgery, and his agent said in a statement obtained by The New York Times that “the news is not good.”

“Salman will likely lose one eye; the nerves in his arm were severed; and his liver was stabbed and damaged,” said agent Andrew Wylie, who added that as of now Rushdie cannot speak.

Police said Rushdie was stabbed in the neck as well as the abdomen. A number of people rushed to the stage and took the suspect to the ground, before a trooper present at the event arrested him.

A doctor in the audience administered medical care until emergency first responders arrived. An interviewer onstage, 73-year-old Ralph Henry Reese, suffered a facial injury but has been released from the hospital, police said.

The attack occurred at the Chautauqua Institution, which hosts arts programs in a tranquil lakeside community 70km south of Buffalo city.

Carl LeVan, an American University politics professor attending the event, told AFP he saw the suspect run onto the stage where Rushdie was seated and “stabbed him repeatedly and viciously.”

LeVan, a Chautauqua regular, said the suspect “was trying to stab him as many times as possible before he was subdued,” adding that he believed the man “was trying to kill” Rushdie.

“There were gasps of horror and panic from the crowd,” the professor said.

LeVan said witnessing the event had left him “shaken,” adding he considered Chautauqua a safe place of creative freedom.

“To know that this happened here, and to see it – it was horrific,” he said. “What I saw today was the essence of intolerance.”

Another witness, John Stein, told ABC that the assailant “started stabbing on the right side of the head, of the neck. And there was blood… erupting.”

A decade in hiding

Rushdie, 75, was propelled into the spotlight with his second novel “Midnight’s Children” in 1981, which won international praise and Britain’s prestigious Booker Prize for its portrayal of post-independence India.

But his 1988 book The Satanic Verses brought attention beyond his imagination when it sparked a fatwa, or religious decree, calling for his death by Iranian revolutionary leader Ayatollah Ruhollah Khomeini.

The novel was considered by some Muslims as disrespectful of the Prophet Mohammed.

Rushdie, who was born in India to non-practicing Muslims and today identifies as an atheist, was forced to go underground as a bounty was put on his head – which remains today.

He was granted police protection by the government in Britain, where he was at school and where he made his home, following the murder or attempted murder of his translators and publishers.

He spent nearly a decade in hiding, moving houses repeatedly and being unable to tell his children where he lived.

Rushdie only began to emerge from his life on the run in the late 1990s after Iran in 1998 said it would not support his assassination.

Now living in New York, he is an advocate of freedom of speech, notably launching a strong defence of French satirical magazine Charlie Hebdo after its staff were gunned down by Islamists in Paris in 2015.

The magazine had published drawings of Mohammed that drew furious reactions from Muslims worldwide.

Threats and boycotts continue against literary events that Rushdie attends, and his knighthood in 2007 sparked protests in Iran and Pakistan, where a government minister said the honour justified suicide bombings.

The fatwa failed to stifle Rushdie’s writing and inspired his memoir Joseph Anton, named after his alias while in hiding and written in the third person.

Midnight’s Children – which runs to more than 600 pages – has been adapted for the stage and silver screen, and his books have been translated into more than 40 languages.

Suzanne Nossel, head of the PEN America organization, said the free speech advocacy group was “reeling from shock and horror.”

“Just hours before the attack, on Friday morning, Salman had emailed me to help with placements for Ukrainian writers in need of safe refuge from the grave perils they face,” Nossel said in a statement.

“Our thoughts and passions now lie with our dauntless Salman, wishing him a full and speedy recovery. We hope and believe fervently that his essential voice cannot and will not be silenced.” – AFP 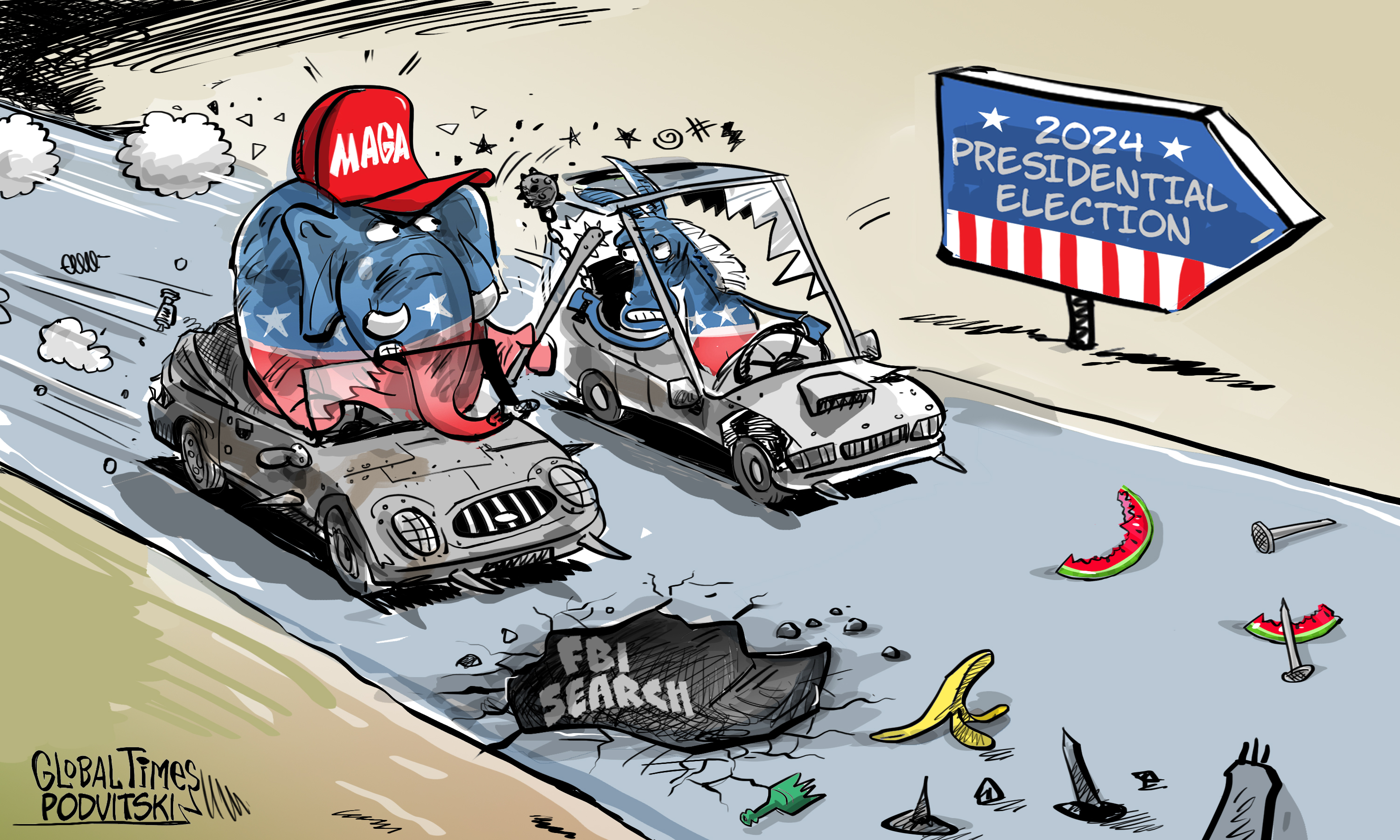 The US is presenting the world a partisan infighting drama. After the FBI searched former US president Donald Trump’s home at Mar-a-Lago in Florida, Trump on Wednesday invoked his Fifth Amendment right in refusing to answer questions under oath in New York over alleged fraud at his family business.

There have been many controversies and allegations about Trump. However, the timing of the FBI and the US Department of Justice’s (DOJ) actions indeed cause suspicion. The midterm elections are less than three months away, which makes external observers on US affairs easily speculate that the investigation into Trump and the raid of his home are really aimed at influencing the outcome of the midterm elections, discrediting Trump and hindering him from running in the 2024 presidential election, Chinese analysts noted.

The FBI search led to fierce bickering between Democrats and Republicans. Democrats defended it as a long-overdue step toward justice and proof that no one – even a former president – is above the law, while Republicans and Trump supporters accused the Democrats of weaponizing federal agencies against political opponents and vowed to probe what they alleged was political interference at the DOJ if they win the majority in Congress in November.

The political farce, like a soap opera, is far from over. When Trump tried to turn the FBI’s raid to his benefit, citing the investigation in fundraising emails soliciting political donations from his supporters, he added extra comedy color to this drama.

Analysts believe that the search on Trump’s home will open Pandora’s box – the Democrats will be revenged in the same way after they step down and the US partisan battle is losing its bottom line. “This is possible. There will be a more vicious competition such as hunting down opponents through judicial means,” said Xin Qiang, deputy director of the Center for American Studies at Fudan University. He noted that this will lead to further division in politics or even society. “It cannot be ruled out that some other US presidents may also face constant lawsuits after stepping down in the future,” Xin told the Global Times.

This isn’t the political ecology that a healthy power is supposed to have. In fact, the US has degraded into a “banana republic.” The search on Trump’s home further steps on the accelerator of US political degeneration and decline.

The US itself is sick. Although it’s still a major power with a strong economy, military and a domineering diplomacy, it has serious political, economic, social and legal problems. The intensifying political division and partisan battle have led to a major crisis in the US at all levels.

The art and core of democracy is compromise, but the situation in the US is a fierce struggle – If I cannot engineer your downfall, then it is me who’s going to jail. Is this still democracy? US politics has not followed the path of benign partisan democracy of compromise, but is heading toward the opposite direction – toward a populist and authoritarian direction with deeper partisan divisions, opposition and polarization.

The foundation of the US empire is loosening, and it has been shaken by American politicians themselves. Trump insisted that “Such an assault could only take place in broken, third-World countries. Sadly, America has now become one of those countries, corrupt at a level not seen before.” But it is these unscrupulous politicians, who live on partisan struggle, that make the US degenerate.

The US has completely destroyed its image as described by the political elites. When there is no partisan mutual trust left, how can the rest of the world still believe the US?

“With more of such farces of partisan struggle emerging in the future, the US will have more serious domestic political problems, which will naturally change other countries’ views on the party politics of the US. They will at least raise more questions and reflect on the so-called Veto Politics and its negative influence upon national governance capability of the US. This is inevitable,” Xin said. Global times