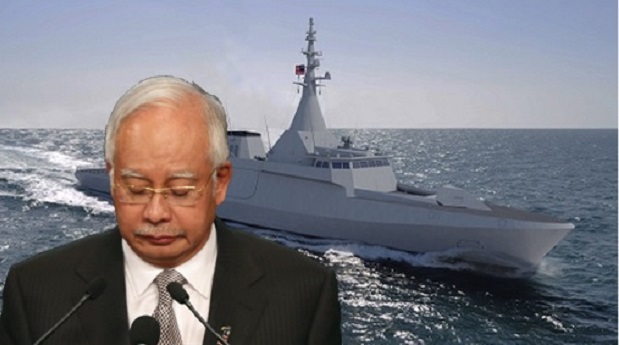 Zumwalt-class stealth destroyer from the United States and Chinese Type 055 stealth guided destroyer might be invisible and undetectable. But both ships are no match for Malaysia LCS (Littoral Combat Ship). None of the six warships, worth a staggering RM9 billion, can be detected since 2013 until today. Despite having paid RM6 billion, no vessel has been seen.

If you think missing engines from fighter jets and submarines that cannot dive were hilarious, wait till you hear how RM6 billion disappeared into thin air in one of the biggest corruption scandal involving Najib administration after his infamous 1MDB scandal. It makes the Scorpene-class submarines purchased by Najib in 2002 at a whopping €1 billion (about RM4.78 billion) look like a child play.

The LCS scandal might not be as explosive as the Scorpene submarine scandal, where a Mongolian translator – Altantuya Shaariibuu – was kidnapped before exterminated using military grade C4-explosive by Najib bodyguards, but the corruptions are definitely more than the €114 million (RM500 million) in “commission” paid to then-defence minister Najib Razak. 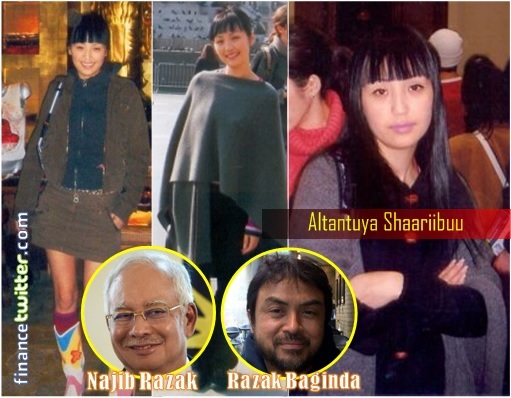 The procurement of the six combat ships was approved in 2011. The contract, which took effect on Oct 3, 2013, was awarded to Boustead Naval Shipyard Sdn Bhd without any open tender. Hanky-panky started when the original SIGMA design was chosen by the Navy and approved by the ministry of defence, only to be changed to GOWIND type on July 11, 2011 at the suggestion of Boustead.

Why did the defence ministry listen to a contractor instead of the end user – Royal Malaysian Navy? Navy Commander Abdul Aziz Jaafar has described the entire project as “something is gravely wrong“. Construction of the first vessel was supposed to start in 2014 with delivery in 2017 or 2018. However, the first ship was only 44% completed in 2019, and is still unfinished till today, August 2022.

Sigma class is a Dutch-built naval vessels designed by Damen Group. Depending on the size, it could be a corvette or frigate. Indonesia is using this type. On the other hand, the Gowind 2500 design was developed by France’s Naval Group, formerly known as DCNS. Based on a corvette design, the Gowind is considered a frigate due to its increase size and displacement.

If DCNS sounds familiar, that’s because it was the same French company that paid RM500 million as kickbacks to Najib Razak disguised as “consulting work” through his close associate Abdul Razak Baginda in the Scorpene sub project. The bribes were paid to Perimekar, a Malaysian company of which Baginda’s wife was the primary shareholder.

Assuming Hishammuddin did not lie and Boustead can deliver in 2024, which it certainly can’t, it would take the company some 10 years since construction just to deliver the first ship. Does the country need another 50 years to deliver the remaining 5 Littoral Combat Ships? Already, at least RM255 million worth of LCS equipment is now obsolete.

While Najib used his usual tactic of blaming Opposition Pakatan Harapan for freezing the project after taking power in 2018, Navy Chief Abdul Aziz has testified that he had written 2 letters to former PM Najib, 5 letters to the defence minister and 10 letters to the ministry’s secretary-general. A letter had also been sent to the secretary-general of the Treasury and Chief Secretary of the government.

Meaning from 2011 to 2018 under Najib administration, 19 complaint letters by the navy chief had been ignored because DCNS, having worked with Najib in the previous Scorpene submarine project, was pre-selected because it could facilitate kickbacks for Najib and his deputy Zahid Hamidi, who agreed to change the specification from Dutch Sigma design to French Gowind type.

The best part is, according to the Parliament’s Public Accounts Committee (PAC) chairman Wong Kah Poh, not only five LCS ships should be completed and handed over to the Royal Malaysia Navy (TLDM) by Aug 2022, but until now, “the detailed design has not yet been finalized by the government and Boustead”. So, how could Hishammuddin assure the handover of the first ship when the design is still on the white board? 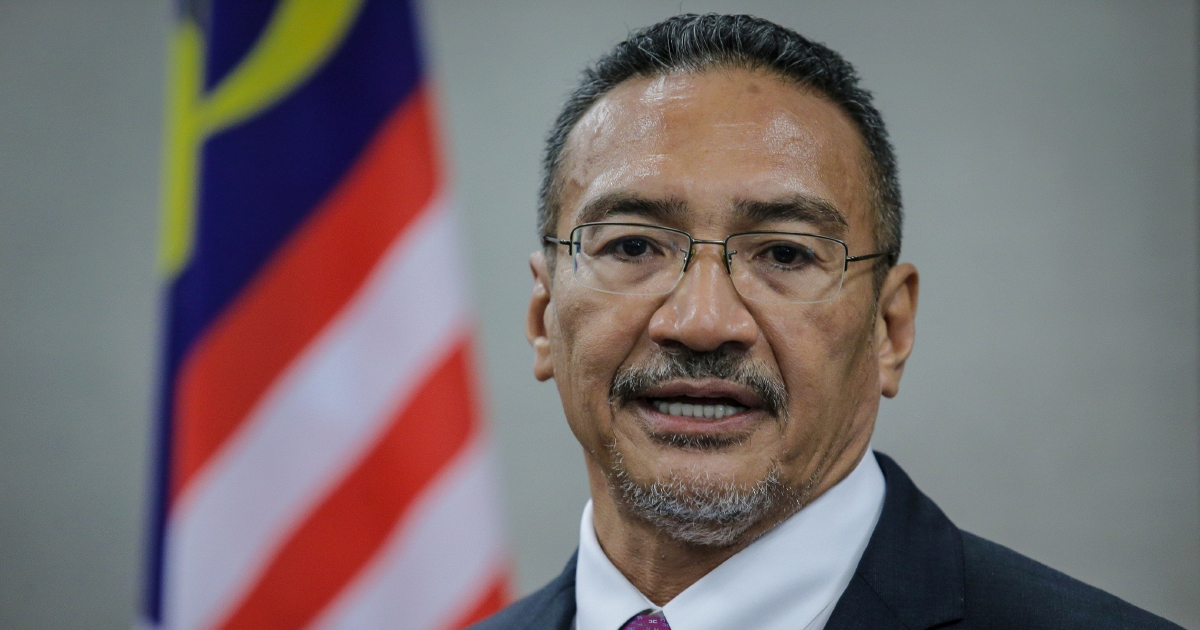 The PAC also discovered that of the RM6 billion paid by the government, Boustead had used RM400 million to repay previous debts incurred under its New Generation Patrol Vessel project. A whopping dubious RM305 million was used for its facility in Cyberjaya, and another RM700 million was a cost overrun for the LCS project. Meaning RM1.4 billion meant for LCS has been diverted elsewhere.

Boustead Naval Shipyard is a subsidiary of Boustead Holdings, whose biggest shareholder is the armed forces fund – Lembaga Tabung Angkatan Tentera (LTAT). Interestingly, Lodin Wok Kamaruddin, the chief executive of LTAT since 1982 and Group Managing Director of Boustead Holdings since 1991 until the stunning defeat of Najib in the May 2018 General Election, was also formerly 1MDB chairman.

Yes, Najib tried to spin and twist that there’s nothing wrong in awarding the LCS project, and other dubious contracts, to Boustead Holdings directly without tender because with a 60% stake, LTAT would benefit directly from those projects. However, Lodin, a strong loyalist and crony of Najib, was also Najib’s proxy in deals involving corruption and money laundering.

Ask anyone in the defence sector and they will tell you that Boustead was notorious for monopolizing all the military contracts, but can never deliver them. However, not many realized that Mr Lodin was one of the directors of Perimekar Sdn Bhd, a company which was set up only in 2001, a few months before the Scorpene submarine deal was signed – for the purpose of receiving bribes.

Lodin was also on the boards of Affin Bank Berhad, one of Perimekar’s bankers. Like the Littoral Combat Ship project awarded to Boustead, Perimekar had no relevant experience or expertise in managing a submarine project. In that Scorpene deal, Razak Baginda received a further €30 million, and another €2.5 million to bribe other Malaysian officials.

Leaked information received by opposition PKR deputy president Rafizi Ramli showed that Najib Razak and French naval vessel maker DCNS had already decided on the LCS project even before the defence ministry appointed Boustead as the main contractor. Meaning it was a “done deal” between Najib and DCNS, and Zahid together with Lodin were merely carrying out the order.

To make matters worse, the original deal for the six 100-metres long combat ships was RM6 billion. Almost 11 months later, the project cost ballooned to RM9 billion. But the deal was not directly between Boustead and DCNS.  Between Boustead and DCNS, subcontractors – Contraves Advanced Devices Sdn Bhd who in turn appointed its affiliated Contraves Electrodynamics Sdn Bhd – were introduced.

The subcontractor Contraves was awarded two of the project packages worth RM1.185 billion by the government. Contraves then gave the packages to DCNS at merely RM397 million – allowing a jaw-dropping 200% commission to be paid to Najib and his minions. Rafizi said RM890 million had been embezzled. The actual kickbacks could be much higher.

It’s very doubtful that Boustead could deliver all the six ships without any bailout. Boustead already said it needed another RM4 billion – a total RM10 billion – to complete the project. If the UMNO-led Barisan Nasional government wins big in the coming polls, billions more could be injected. That would mean the RM6 billion of taxpayers’ money is essentially burnt, most likely ended in someone’s pocket.

Najib’s lame argument that Contraves are 51%-49% join venture companies between Boustead Heavy Industries Corporation and German company Rheinmetall Air Defence does not change the fact that Lodin Wok, his loyal crony, still called the shot in his capacity as the Group Managing Director of Boustead Holdings.

In comparison, the Royal Malaysian Navy’s plan to procure four LMS (Littoral Mission Ship) under its “15to5” Armada Transformation Programme from China through Boustead Naval Shipyard has been very successful.The contract, signed on March 23, 2017, has so far seen the delivery of all the four LMS ship in December 2021 – at a rate of 14 months for a vessel.

The difference between the French LCS and Chinese LMS projects is that the LMS ships were built entirely in China. It was Pakatan Harapan government who signed the first supplemental contract on August 20, 2019 to revise the contract to RM1.05 billion, saving RM122 million by having all four units of the LMS built at WSIG Shipyard in Wuchang near Shanghai, China which has vast experience in building naval warships.

Originally, the RM1.17 billion LMS project would have seen two ships locally built by Boustead and two to be constructed in China. It was largely Najib’s plan to appease Beijing at the peak of 1MDB scandal. Nevertheless, it proves that Boustead is not only incompetent and inexperienced in shipbuilding, but it is nothing but Najib’s tool to misappropriate public funds.