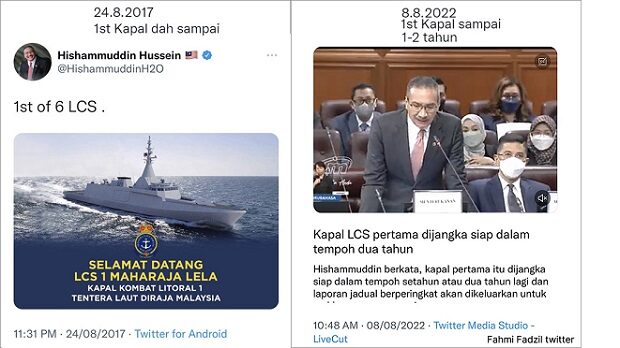 MPs remind Hisham he welcomed non-existent LCS into fleet in 2017
Defence Minister Hishammuddin Hussein is under fire for his promise to deliver the first of the controversial littoral combat ships (LCS).

This is because, during his first stint as defence minister in 2017, he announced the arrival of the first ship.

However, it has been revealed now that the ships never materialised.

In 2017, Hishammuddin tweeted a photo of what he said was the LCS 1 Maharajalela and welcomed it into the naval fleet.

“The first of six LCS,” he said then.

Years after that statement, Hishammuddin told the Dewan Negara yesterday that the first of the ships will be ready within two years and that his ministry was given a six month-mandate by the cabinet to revive the project.

Sharing a screenshot of Hishamuddin’s 2017 tweet, Bagan MP Lim Guan Eng questioned how he could have welcomed a non-existent ship into the fleet.

“Wow. What glasses are you wearing, minister?” Lim asked on Facebook.

The screenshot is also making the rounds on Twitter.

Sharing it next to a headline on the minister’s latest promise, Lembah Pantai MP Fahmi Fadzil asked, “Which Hisham can we trust?”

“No wonder (Hishammuddin) read the report with trembling hands and a soft voice. He has been caught lying,” one Twitter user responded.

Others joked that perhaps the vessel that was welcomed into the fleet was a new design with a stealth mode, allowing it to go invisible and escape radar detection.

RM6 billion spent with nothing to show

About RM6 billion has been spent on the project but not a single ship has been completed.

The project is under the limelight following findings by the Public Accounts Committee (PAC).

The PAC found that the Defence Ministry and its company Boustead Naval Shipyard Sdn Bhd (BNS) ignored the Royal Malaysian Navy in the procurement of the LCS.

This led to a cost overrun amounting to RM1.4 billion in the RM9 billion contract awarded in 2011.

The PAC found the ministry initially chose the Sigma design for the LCS in May 2011 but two months later changed it to the Gowind design, from the same French manufacturer of the Scorpene submarine, against the navy’s advice.

The decision to change the design was made by then defence minister Ahmad Zahid Hamidi, upon BNS’ recommendation.

Various other decisions made by BNS escalated costs further, the PAC found, with BNS plunging deeper into debt.

“Even until now, the detailed design has not yet been finalised by the government and BNS. This has resulted in the continuous release of the variation order and exposure to opportunity for manipulation,” the PAC report read.

PAC also found that part of the payment made was not used in the procurement of LCS but RM400 million was used by BNS to settle the bad debt of another old project – the New Generation Patrol Vessel.