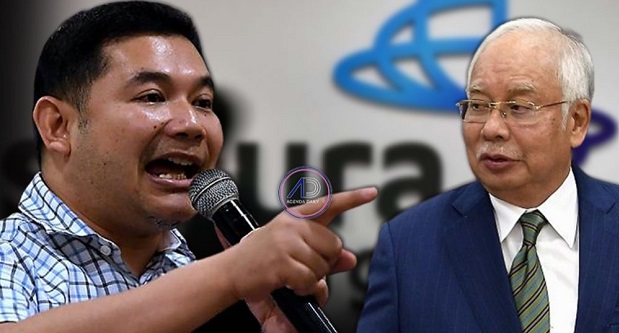 “Logically, the government of Malaysia should be employing DCNS directly (as it did for the Scorpene submarine project) since it has the requisite expertise, design and shipbuilding capability,” Rafizi said in a statement.

Instead, the government appointed BNS as its main contractor which, in turn, appointed two layers of sub-contractors, above DCNS in the structure.

FMT is attempting to seek comments from BNS and the sub-contractor named by Rafizi.

Rafizi said BNS had signed a letter of agreement with the first sub-contractor for two packages worth RM1.18 billion.

Rafizi said while he understood that the reason for going through BNS was to develop local capabilities and help army veterans as the company is owned by the armed forces pension fund (LTAT), the “multiple layers” of sub-contractors hinted at elements of corruption.

He said he would continue to unveil elements of corruption in the LCS project.

Yesterday, Rafizi had said Najib cannot “wash his hands” of the LCS scandal.

He said Najib, who was in office when the government signed the deal for the LCS, was the only person with the power to influence a change in the ship’s design from the navy’s requirements.

Defence minister Hishammuddin Hussein later said those involved in misconduct in the project would be brought to justice.  FMT

Rafizi said the inflated costs following a series of sub-contracts would amount to a 200 per cent commission taken by “sharks” involved in the deal.

Rafizi claimed that the LCS scandal showed planning from the start to “hide” the involvement of DCNS — which had previously sold Scorpene submarines to Malaysia in a deal inked during then defence minister Datuk Seri Najib Razak’s tenure — in the project.

Rafizi said the Malaysian government should have logically appointed DCNS directly as the contractor since it was the main supplier of expertise, design and construction of the LCS vessels.

But he noted that Malaysia instead on December 16, 2011 appointed Boustead Naval Shipyard (BNS) Sdn Bhd as the main contractor, which then appointed subcontractors, which ultimately ended up appointing DCNS as a subcontractor.
Rafizi noted that BNS had on April 9, 2012 issued letters of appointment to subcontractor Contraves Advanced Devices Sdn Bhd for two work packages worth a combined RM1.185 billion under the LCS project.

But BNS on the same day also allowed CAD to appoint its affiliated company Contraves Electrodynamics Sdn Bhd (CED) as a subcontractor, with CED then further issuing a letter of appointment to DCNS for works to be done at a cost of RM397 million.

“That means, for the works that would be invoiced by DCNS to CED at RM397 million, the claims from the subcontractors CED and CAD to the Malaysian government (through BNS) is three times more expensive,” he said in a statement today.

“Even children can conclude there were hidden hands behind the companies BNS, CAD and CED which arranged the supply contracts to the extent of taking 200 per cent commission from the cost charged by DCNS,” he claimed.

“The public wants to know who are the sharks robbing the public’s funds and weakening the country’s defence like this,” he said, before going on to criticise Najib’s alleged attempts to divert attention from the issue as “weak” and accusing the latter of attempting to portray the LCS scandal as not involving any corruption.

Claiming there were efforts to rob the Malaysian public through the LCS project, Rafizi asked who was the alleged “shark” who has the powers to order and protect BNS officials from allegedly being involved in such “daylight robbery”.

Rafizi claimed that there were abuses in the LCS project, by appointing the main contractor which appointed other companies before DCNS was finally appointed as a subcontractor.

“Although this decision was explained as an effort to help armed forces’ veterans (as BNS is owned by Boustead which is owned by the Armed Forces Fund Board (LTAT)) and to build local expertise, the move to appoint two further layers of sub-contractors before it reached the end supplier which is DCNS, reflects elements of abuse from the start,” he said.

In its report released on August 8, Parliament’s bipartisan watchdog Public Accounts Committee (PAC) said BNS was awarded a RM9.128 billion 10-year contract from 2013 to 2023 for the supply of the six LCS.

According to the PAC, the project had run into cost overruns of RM1.4005 billion as the government’s payments to the Boustead Naval Shipyard was not fully used for the LCS project, noting that the RM1.4 billion overrun included RM400 million that was spent to pay off an old debt for the New Generation Patrol Vehicle project.

The PAC report said equipment kept in storage for the LCS project is estimated to be worth RM1.7 billion, with an estimated 15 per cent of these already obsolete. MALAY MAIL