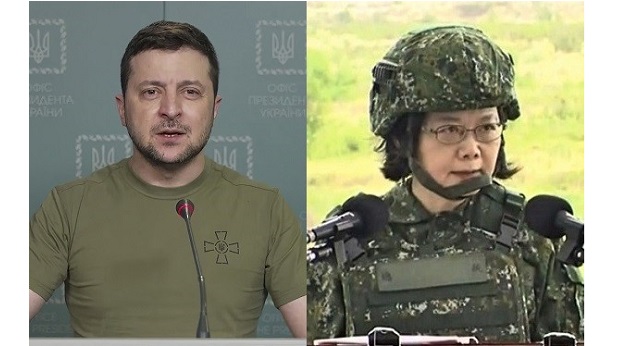 Musician Roger Waters: "They're not encircling Taiwan, Taiwan is part of China, and that's been absolutely accepted by the whole of the international community since 1948, and if you don't know that, you're not reading enough. Go and read about it."

This is where we are. pic.twitter.com/eeec0FOXx7

China’s military announced fresh military drills on Monday in the seas and airspace around Taiwan — a day after the scheduled end of its largest ever exercises to protest against last week’s visit to Taipei by U.S. House Speaker Nancy Pelosi.

China’s Eastern Theatre Command said it would conduct joint drills focusing on anti-submarine and sea assault operations — confirming the fears of some security analysts and diplomats that Beijing would continue to maintain pressure on Taiwan’s defenses.

Pelosi’s visit to Taiwan last week infuriated China, which regards the self-ruled island as its own and responded with test launches of ballistic missiles over Taipei for the first time, as well as ditching some lines of dialogue with Washington.

The duration and precise location of the latest drills is not yet known, but Taiwan has already eased flight restrictions near the six earlier Chinese exercise areas surrounding the island.

Shortly before the latest drills were announced, Taiwan President Tsai Ing-wen met visiting St. Vincent and the Grenadines Prime Minister Ralph Gonsalves, telling him she was moved by his determination to visit despite China’s military pressure.

“Prime Minister Gonsalves has expressed in recent days that the Chinese military drills would not prevent him from visiting friends in Taiwan. These statements have deeply touched us,” Tsai said at a welcome ceremony for Gonsalves in Taipei.

It was unclear if Tsai had invited Gonsalves before or after Pelosi’s visit. “We don’t disclose internal planning or communications between governments,” the Taiwanese foreign ministry said when asked by Reuters.
Beyond the firing of 11 short-range ballistic missiles during the four earlier days of exercises, Chinese warships, fighter jets and drones maneuvered extensively around the island.

Shortly before those drills ended on Sunday, about 10 warships each from China and Taiwan maneuvered at close quarters around the unofficial median line of the Taiwan Strait, according to a person familiar with the situation who is involved with security planning.

Taiwan’s defense ministry said Chinese military ships, aircraft, and drones had simulated attacks on the island and its navy. It said it had sent aircraft and ships to react “appropriately.”

China’s defense ministry meanwhile maintained its diplomatic pressure on the United States, defending its shelving of military-to-military talks in protest at Pelosi’s visit.

“The current tense situation in the Taiwan Strait is entirely provoked and created by the U.S. side on its own initiative, and the U.S. side must bear full responsibility and serious consequences for this,” defense ministry spokesman Wu Qian said in an online post.

Pentagon, State Department and White House officials condemned the move, describing it as an irresponsible over-reaction.

China’s cutting of some of its few communication links with the U.S. military raises the risk of an accidental escalation over Taiwan at a critical moment, according to security analysts and diplomats.

One U.S. official noted that Chinese officials had not responded to calls from senior Pentagon officials amid the tensions last week, but that they did not see this as a formal severing of ties with senior figures, such as U.S. Defense Secretary Lloyd Austin.

Asked directly about those reports, defense ministry spokesman Wu said, “China’s relevant counter-measures are a necessary warning to the provocations of the United States and Taiwan, and a legitimate defense of national sovereignty and security.”