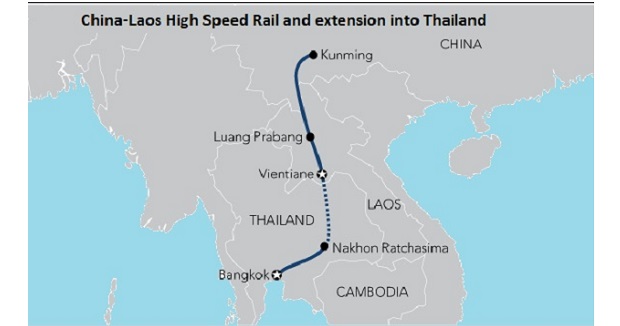 BANGKOK (The Nation/Asia News Network): Officials from several Thai ministries will visit Vientiane later this month to discuss the Thailand extension of the China-Laos railway.

Plans for the Thai extension of the three-country railway also involve the finance, foreign, agriculture and commerce ministries.

Saksayam said the State Railway of Thailand (SRT) would speed up construction of the Nong Khai-Bangkok high-speed railway and development of Nong Khai station as a trade hub.

The minister also revealed progress on a west-east rail link from Nong Khai.

“SRT will also propose a double-track rail project from Nong Khai to Khon Kaen to the Cabinet,” he said.

Musician Roger Waters: "They're not encircling Taiwan, Taiwan is part of China, and that's been absolutely accepted by the whole of the international community since 1948, and if you don't know that, you're not reading enough. Go and read about it."

This is where we are. pic.twitter.com/eeec0FOXx7 Meanwhile, the Department of Highways would expedite a request for budget to study construction of a new bridge across the Mekong River.

As for the Finance Ministry, its Customs Department will hasten procurement of mobile X-ray screening equipment for the Nong Khai border checkpoint, as well as implementation of export-import procedures at Nong Khai railway station.

Meanwhile, the Foreign Ministry is collecting data on development in Laos to promote Thai exports and also coordinating with Laos and China on the rail link.

“The Agriculture Ministry will speed up talks with China to open six land checkpoints,” Saksayam added.

“The Commerce Ministry will study Thai-Chinese trade in Nong Khai and how to gain advantage from the Laos-China railway.”

Saksayam said the Industry Ministry would expedite construction and development of Udon Thani’s industrial estate to support trade by rail.

He added that the Transport Ministry was also pushing development of a high-speed railway in the South to link five countries – China, Laos, Thailand, Malaysia and Singapore.

“The ministry sees that development of the southern route will help strengthen transport and tourism across the Asean region,” he said.  ANN

The impact of the BRI on Asean education

THE Belt and Road Initiative (BRI) is a massive development venture that the Chinese government launched in 2013 under President Xi Jinping’s leadership. It aims to foster market assimilation and economic collaboration between nations along the recommended Belt and Road routes that cross Africa, Europe, Central Asia, and South-East Asia. The BRI’s main objectives are coordinating policies, ensuring infrastructural connectivity, promoting unhindered trade and fiscal integration, and strengthening interpersonal ties. The aspect of education and training has evolved as a crucial part of this trans-continental vision and endeavour, despite the initiative’s focus on infrastructure development—as does existing literature on the BRI. The underlying presumption is that President Xi is aware there must be shared understanding and aspirations among the nations for the BRI to be effective and viable in the long run.

It is even more crucial for us to uphold the Silk Road Spirit in the 21st century, a new period distinguished by the themes of progress, peace, collaboration, and mutual benefit in light of the slow global economic recovery and the difficult international and regional circumstances.

Fast-tracking the construction of the Belt and Road can help boost the economic growth of the concerned nations, foster regional economic collaboration, increase cultural exchanges and mutual learning among various civilisations, and advance global peace and development. It is a grand project which would help people everywhere. The BRI is a key component of the “Chinese Dream,” offering a fresh paradigm of progress for China. Sometimes described as “Chinese infrastructuralism” and termed as a substitute means of globalisation, it aims to promote more regional assimilation and has the ability to transform both higher education and vocational training. Investment in and development of infrastructure includes multiple layers, including the creation of physical infrastructures like ports and railroads as well as people-to-people associations that emphasise the new digital Silk Road, university affiliations, and the growth of cultural and educational exchanges.

Transnational collaborations are another way that China and Asean’s commercial and educational ties are expressed. The Chinese Ministry of Education has now formally recognised three such agreements throughout South-East Asia. A campus of Xiamen University was established in Kuala Lumpur, Malaysia, in 2016. This is a noteworthy move by a leading Chinese research university, as it follows the accomplishment of the Soochow University branch campus, which was established in Vientiane, Laos, in 2012. Additionally, Rangsit University in Thailand and Yunnan University of Finance and Economics collaborated to create the Bangkok Business School. Such developments signify a move away from prior Chinese efforts to concentrate on luring international branch campuses, which are mainly based in the UK and US, into the nation and towards a new stage of “cultural experiments in higher education,” wherein the Chinese prototype is being imposed on the rest of the world.

Creating Confucius Institutes and Scholarships across Asia to promote Chinese culture, opening language training programmes in China and Belt and Road nations, and establishing a variety of university alliances and consortiums are all additional educational initiatives. These include the University Alliance of the Silk Road, established in 2015 and based in Xi’an-Jiaotong University, and the newly established University Consortium of 21st Century Maritime Silk Road, set up and based in Xiamen University in 2018.

As such, the BRI is a noteworthy new kind of educational globalism

We can refer to a new important version of globalism as “Chinese infrastructuralism”. The BRI is an alternative Chinese prototype of globalism, including more than 70 nations and over a trillion dollars in Chinese investment to strengthen the social, digital, and economic sectors of Eurasian nations. The Chinese Dream and BRI share a common goal of creating a brand-new Chinese economic model and alternative form of globalisation which combines Chinese infrastructure investment with BRI nations with subpar infrastructure across the land bridge connecting Europe and Asia. A new development ideology known as “Chinese infrastructuralism” comprises both “soft” and “hard” infrastructure as well as nations of (infra)structure such as people-to-people exchange, the New Digital Silk Road, and university coalitions. One of the key ideas is interconnection, which is based on digitalisation, compression, speed, and the latest digital technologies (AI, and quantum computing), which are crucial for the growth of transport hubs. Education and the “communicative turn” (a component of the cultural turn) have close connections. This three-tiered communication system — code, content, and infrastructure — also includes the deep-sea fibre-optic cables necessary for the Internet. Better student interchange and cultural archival development will be possible thanks to this educational “communication paradigm” outside the UK, US, and Australia’s present neoliberal export education market.

The geopolitical notion of “Eurasia” is becoming more closely linked to the idea of the “civilizational state,” which outlines strategic concerns: Asia is controlled by “High Asia”. “Educating the Future” represents a narrative analysis of the Chinese Dream and its manifestation of the BRI as an argument regarding educating upcoming generations of Chinese pupils at home as well as overseas. This would unleash the talents and collective intelligence of the Chinese mind, which is not merely an argument regarding human capital but instead a semiotic perspective of creative intellectual labour under circumstances of growing connectivity. The educational component of BRI demands a frankness and freedom to envisage, experiment, and work towards national consensus by using guidance which facilitates the thinking process regarding China’s prospects and its scientific transformation. – WRITER – Dr Lin Woon Leong – ANN