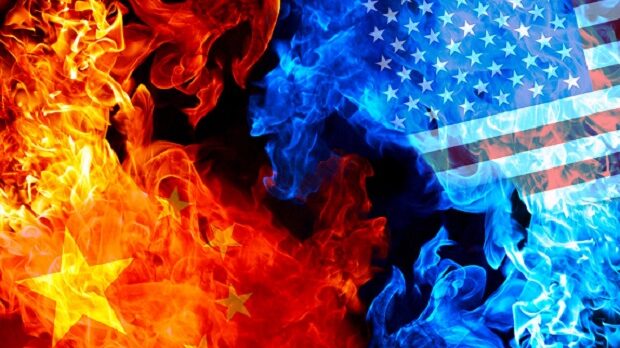 Taiwan has accused the Chinese army of simulating an attack on its main island, as Beijing continued the large-scale military drills it began in response to US House Speaker Nancy Pelosi’s visit to Taipei.

The People’s Liberation Army (PLA) sent “multiple” warships and aircraft into the Taiwan Strait on Saturday, Taiwan’s Ministry of National Defense said in a statement.

The ministry said it had also fired flares on Friday night to warn off seven drones flying over the Kinmen islands just off China’s eastern coast, and to warn unidentified aircraft that were flying over its outlying Matsu islands.

“Multiple PLA craft were detected around the Taiwan Strait, some have crossed the median line,” the ministry said on Twitter, referring to a demarcation line that runs down the Taiwan Strait and that Beijing does not recognise.

China’s state media have sought to frame the drills as a war plan rehearsal since they began earlier this week, and said the military got close enough on Friday to visually confirm the island’s coastline and mountain ranges.

“Today, my comrades-in-arms and I were ordered to conduct a close-in deterrence mission, in which we looked down at the coastline and the Central Mountain Range of the Taiwan island within visual range,” Hou Hong, a pilot at a brigade attached to the PLA Eastern Theater Command Air Force told the state-run Global Times.

Beijing claims self-ruled Taiwan as its own and has not ruled out the use of force to take control of the island.

Relations between Beijing and Washington were already strained – over issues from trade, to the treatment of the mostly Muslim Uighurs and Hong Kong – but the situation has deteriorated further with the visit of Pelosi, who is the highest-profile US official to visit Taiwan in decades.

China fired ballistic missiles over Taiwan after Pelosi had left, with the unprecedented drills in six locations around the island due to end at noon (04:00 GMT) on Sunday. It has said it will halt cooperation with the US in eight specific areas, including climate change, cross-border crime prevention and military issues.

Christopher Twomey, a security scholar at the US Naval Postgraduate School in California, told Reuters news agency he believed it was the beginning of a new Taiwan crisis and that the severing of communication links was worrying.

“This increased density of forces, in the context of an intensifying crisis, raises the prospect for inadvertent escalation that neither side wants,” Twomey said, speaking in a private capacity.

“That is precisely the time you would want to have more opportunities to talk to the other side … Losing those channels greatly reduces the ability of the two sides to de-conflict military forces as various exercises and operations continue.”

As China continues to showcase its military strength around Taiwan, at least four US vessels, including the aircraft carrier USS Ronald Reagan, the amphibious assault ship USS Tripoli and the guided missile cruiser USS Antietam are east of Taiwan, Reuters said it had confirmed.

The United Nations and others have called for urgent de-escalation.

On Saturday, US Secretary of State Antony Blinken was in the Philippines, where new President Ferdinand Marcos Jr faces a tricky challenge in balancing Manila’s relations with the two major powers.

Blinken assured foreign secretary Enrique Manalo that Washington was determined to avoid a crisis in the Taiwan Strait, and reassured Marcos Jr that the US was committed to the two countries’ mutual defence treaty.

Taiwan also dominated discussions as foreign ministers from the Association of Southeast Asian Nations (ASEAN) and counterparts from countries including the US, China, Russia and Japan met in Phnom Penh this week.

“There is no justification for this extreme, disproportionate and escalatory military response,” Blinken told a news conference on the sidelines of those meetings.

“We wish to issue a warning to the United States: Do not act rashly, do not create a greater crisis,” Wang said.

Taiwan has been self-ruled since 1949 when Mao Zedong’s communists took power in Beijing at the end of the Chinese civil war, and the defeated nationalists under Chiang Kai-shek set up government in Taipei.

The last major crisis in the Taiwan Strait was in 1996 as the island prepared for its first democratic presidential election. AL JAZEERA
MANILA — President Ferdinand Marcos Jr. of the Philippines and Secretary of State Antony J. Blinken said on Saturday that their nations were committed to strengthening their military alliance, and that their governments would need to deal with rising tensions in Asia, including those involving China and Taiwan.

Mr. Marcos said at the start of a meeting with Mr. Blinken in the presidential palace that Speaker Nancy Pelosi’s visit to Taiwan had not, in his opinion, intensified those tensions; rather, it “demonstrated how the intensity of the conflict has been at that level for a good while now, but we sort of got used to the idea and then put it aside.”

Mr. Marcos’s comment came as China continued to hold military exercises in the waters near Taiwan, two days after it fired 11 ballistic missiles into the same area, five of them landing in waters that are part of Japan’s exclusive economic zone.

The United States, Japan and other nations have issued statements denouncing China’s actions and calling for de-escalation. The words by Mr. Marcos also supported the assertion by Mr. Blinken and other American officials that Ms. Pelosi’s visit was consistent with U.S. policy on Taiwan, not a shifting of the status quo.

Mr. Marcos also spoke of building on the mutual defense arrangement between the United States and the Philippines. The two countries are treaty allies, and the U.S. military has long maintained a presence in the Philippines. American officials have been discussing possible greater access to military bases in the country, doing more exercises between the two militaries and making their defense systems more interoperable — part of Washington’s Indo-Pacific strategy aimed at increasing cooperation with allies and partners to counterbalance China.

Mr. Marcos talked about the need “to evolve that relationship in the face of all the changes that we have been seeing,” adding that “the Mutual Defense Treaty is in constant evolution.”

Mr. Blinken agreed. “The alliance is strong,” he said, “and, I believe, can grow even stronger.”

Mr. Marcos was sworn in at the end of June after being elected the 17th president of the Philippines in a landslide victory. He is the son and namesake of a former dictator who fled to Hawaii with his family in 1986 after a peaceful uprising by citizens furious at the father’s brazen corruption. The elder Marcos died in Hawaii in 1989.

The question of how to confront China on its assertive behavior in the region while at the same time dealing with it as an important economic partner was one that arose throughout Mr. Blinken’s meetings with Philippine officials on Saturday, as well as in his discussions with other Asian dignitaries at a regional summit in Cambodia this week.

After Mr. Blinken and Enrique A. Manalo, the foreign minister of the Philippines, met by video, Mr. Manalo said in response to a question at a news conference that the two countries could explore the possibility of joint naval patrols in the Pacific.

Mr. Manalo spoke with Mr. Blinken by video and took part virtually in the news conference because he had tested positive for the coronavirus.

Mr. Blinken told reporters that in his discussions, he had affirmed the “ironclad” commitment of the United States to defending the Philippines and had said that any armed attack on the Philippine military would trigger pledges in their mutual defense treaty.

He also denounced illegal fishing and environmental destruction in Asian waters by “outside actors.” Together, those comments were a clear reference to actions by China. For years, nations in the region have complained of illegal fishing by Chinese boats, which are believed to operate throughout the seas with the approval of China’s Navy.

The Chinese government has made expansive claims to territorial control of the waters and land features in the South China Sea, despite competing claims by Taiwan and Southeast Asian nations, including the Philippines, and the insistence by Washington that all nations maintain freedom of navigation.

Ships from China and the Philippines faced off over the Scarborough Shoal, and an international court in The Hague ruled in 2016 that the shoal was sovereign territory of the Philippines, and that China could not claim the entire South China Sea as its own. China has continued to send ships to the area and assert control of it.

Mr. Marcos’s predecessor, Rodrigo Duterte, tried to adopt more conciliatory policies toward China, including backing down from strong territorial assertions over the South China Sea. But Mr. Marcos has pledged to uphold the ruling of the international court — a decision that will almost certainly bring his government into conflict with China.

Mr. Duterte, who held office for six years, at one point moved to end an important military agreement between the United States and the Philippines. That and other actions by Mr. Duterte, who was widely criticized for human rights abuses and authoritarian practices, strained the relationship between Manila and Washington.

But last year, Mr. Duterte reaffirmed the Visiting Forces Agreement between the countries, which the Philippine military strongly supports. The agreement sets terms for the rotation of American troops through the Philippines for drills and exercises.

In the news conference with Mr. Manalo, Mr. Blinken also criticized China for its decision on Friday to break off eight areas of cooperation and dialogue with the United States over Ms. Pelosi’s Taiwan visit, including military-to-military talks and climate change negotiations.

“Suspending climate cooperation doesn’t punish the United States; it punishes the world, particularly in the developing world,” he said. “We should not hold hostage matters of global concern because of differences between our two countries.”

Mr. Blinken said he warned Wang Yi, the foreign minister of China, at a meeting of foreign ministers on Friday morning at the summit in Cambodia against continuing escalatory actions over Ms. Pelosi’s visit. Hours later, the Chinese Foreign Ministry announced the suspension of the areas of cooperation.

“I think maintaining dialogue is arguably even more important when we’re in a period of heightened tensions, as we are now,” Mr. Blinken said at the news conference in Manila.

After the news conference, Mr. Blinken visited a Covid-19 vaccination clinic at the Manila Zoo and watched a young boy and a young girl get inoculated. Down on a knee, he told the boy he had gotten four shots himself. He later talked about the need for nations to work together to stem the coronavirus pandemic, and he fed fruit to an elephant from Sri Lanka before leaving the zoo. NY TIMES