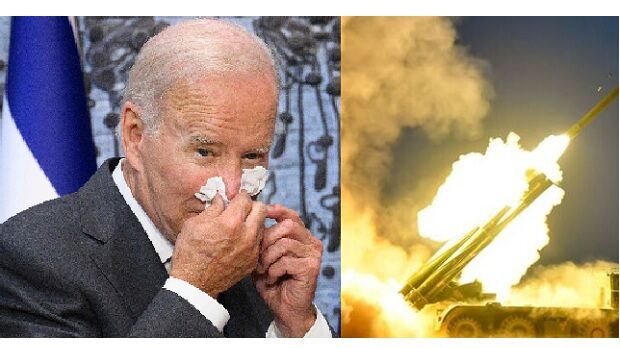 Biden tested positive for a rebound case of COVID last week, after finishing treatment of Paxlovid and testing negative

“Given his rebound positivity which we reported Saturday, we have continued daily monitoring,” O’Connor explained. “This morning, his SARS-CoV-2 antigen testing remained positive.”

President Biden, appearing via teleconference, delivers remarks at a meeting of the Task Force on Reproductive Healthcare Access during an event at the White House complex on Wednesday, Aug. 3, 2022. (Win McNamee/Getty Images)

He added: “The president will continue his strict isolation measures as previously described.”

O’Connor said Biden will continue to conduct “the business of the American people from the Executive Residence,” and that the president “continues to be very specifically conscientious to protect any of the Executive Residence, White House, Secret Service and other staff whose duties require any (albeit socially distanced) proximity to him.”

The president first tested positive for the coronavirus on July 21.

It also announced Friday to sanction Pelosi and her immediate family members as she insisted on visiting Taiwan in disregard of China’s serious concerns and firm opposition, making her the highest-ranking US politician sanctioned by China. Analysts said that all of China’s countermeasures are “unprecedented” and “very necessary” and they showcased China’s strong opposition to the US’ violation of its bottom line. They warned that cancellations of exchange mechanisms of the two militaries at multiple levels may lead to more potential clashes if the US keeps making provocations, and US politicians should stop maniac actions and stop sowing chaos around the world. 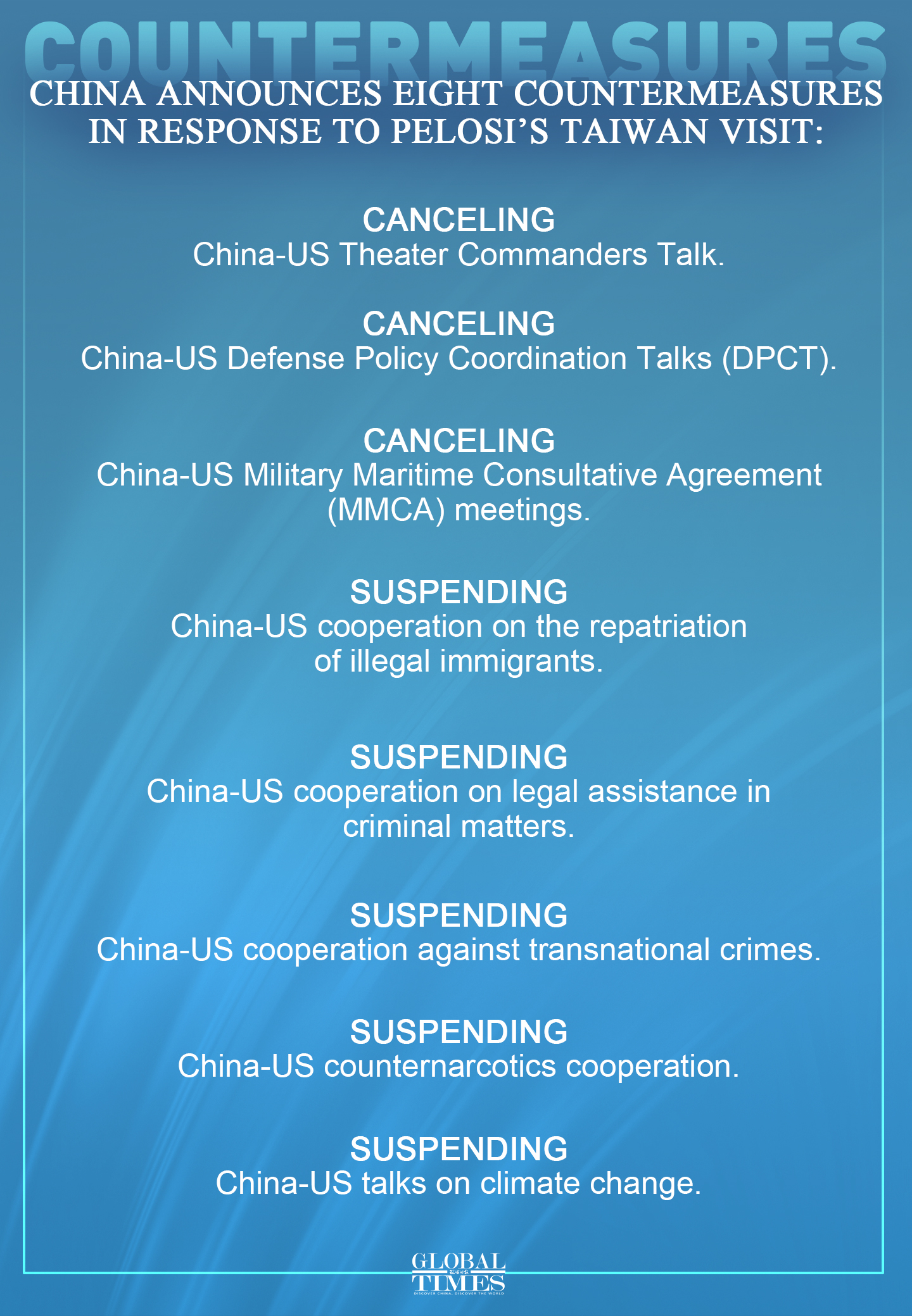 All the cancellation in three aspects is related to the working mechanisms between the Chinese and US militaries, which means that the mutual trust between the two militaries has dived to the bottom, and military-to-military relations have plunged to a low ebb and the risks of conflicts are increasing, Lü Xiang, an expert on US studies at the Chinese Academy of Social Sciences, told the Global Times on Friday.

All the security needs  – including the plane Pelosi flew on this time  – were provided by the US Defense Department, and the US military and Defense Department damaged China’s sovereignty and security in this way, which made military-to-military communication no longer meaningful, he said.

Song Zhongping, a Chinese mainland military expert and TV commentator, told the Global Times that as the US has made provocations on the Taiwan question, which is China’s core interest, bottom line and cornerstone of bilateral relations and China is taking actions to safeguard its sovereignty, any more provocations from the US will increase the possibility of clashes.

The Chinese People’s Liberation Army (PLA) on Thursday commenced the second phase of its large-scale military exercises that completely locked down the island of Taiwan.

Through three-day military drills, the PLA demonstrated the determination and capability of solving the Taiwan question at any time, but it also showed its anti-aggression and area defense capabilities. The cancelation in three aspects also means that based on those capabilities, the PLA could take any countermeasures against any offensive actions by the US military, based on how the situation evolves, Lü said.

“The cancellation also sent a clear signal to the US that the Chinese side will never accept the US blatantly damaging China-US relations without bearing any consequences,” Lü said.

The suspension in five areas has much a bigger impact on the US compared with China, especially in climate change, Xin Qiang, deputy director of the Center for American Studies at Fudan University, told the Global Times.

Since US President Joe Biden took office, he has made significant diplomatic progress in climate change, where any progress requires support and cooperation with China, otherwise, the US won’t achieve anything by itself, Xin said.

Also, the other areas such as repatriation of illegal immigrants and cooperation in drug control are of much concern to the US with a relatively small impact on China, the expert said. For example, on drug control cooperation especially in fighting the Fentanyl issue, less cooperation will make the drug problem more significant in the US but will have little effect on China.

The suspensions in these areas are a warning to the White House as it did not take measures to stop Pelosi’s visit, instead, it played “good cop and bad cop” and required China not to overreact. Biden’s promises to China have not been fulfilled, Qi Kai, an expert on international political economy at the China University of Political Science and Law, told the Global Times.

He also noted that China’s countermeasures also aim to deter countries and politicians in other countries who are mulling a visit to the island of Taiwan that tramples on China’s core interest in following Pelosi’s suit.

UK’s House of Commons’ Foreign Affairs Committee is planning a visit to Taiwan probably in November or early December, The Guardian reported on Monday. Lithuania’s Foreign Minister Gabrielius Landsbergis also tweeted on Wednesday that “Now Pelosi has opened the door to Taiwan much wider, I am sure other defenders of freedom and democracy will be walking through very soon.”

Many practical areas where the US and China can work together have been put on hold now, which means that if the US continues damaging China’s interests in the future, these cooperation mechanisms will also be cancelled, a Beijing-based expert on international affairs who preferred not to be named told the Global Times on Friday.

Such unprecedented countermeasures from China showed that the consequences of Pelosi’s visit to the island of Taiwan continued expanding, and the already affected trust mechanism between China and the US has been further damaged. In the future, the resumption of these eight mechanisms requires long-term and hard negotiations, analysts said.

“China’s countermeasures also deliver a signal to Washington: to cool down and carefully think about what kind of China-US relations the US wants?” Lü asked.

The eight countermeasures followed the military drills surrounding the island of Taiwan, which started on Tuesday night. Mainland customs also announced on Wednesday the suspension of imports of citrus fruits and some frozen fish imports from the island. Analysts said that China’s countermeasures are systematic and won’t be one-off.

It is not surprising to see that China has taken these countermeasures and such measures are “very necessary,” given that Pelosi’s visit posed a provocation to China’s sovereignty, severely violated the one-China principle and the Three Joint Communiqués, and damaged stability in the Taiwan Straits, Diao Daming, an associate professor at the Renmin University of China in Beijing, told the Global Times.

China has always stressed that cooperation is the only right direction for China-US relations but the US’ actions have forced China to take necessary countermeasures, Diao said, calling on US politicians to stop maniac actions that harm global and regional stability.