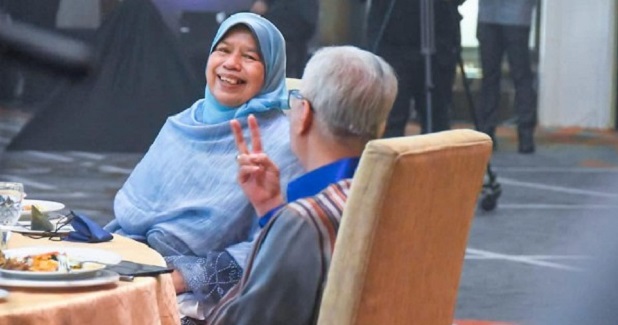 PETALING JAYA: Zuraida Kamaruddin left Bersatu two months ago, but Prime Minister Ismail Sabri Yaakob has yet to meet Perikatan Nasional (PN) leaders over her replacement in the Cabinet.

He said he had “no idea” why it was taking so long.

Bersatu Supreme Council member Faiz Na’aman also said he did not have any news on the meeting and urged Ismail to uphold the spirit of the memorandum of agreement (MoA) with PN.

While he respected the prime minister’s prerogative to retain his current Cabinet lineup, he said Ismail should consider the MoA with the party led by former prime minister Muhyiddin Yassin.

“(The MoA) is one of the main pillars which, in the first place, made his administration not just a reality but also a practical one,” Faiz told FMT.

“The prime minister should honour the pact since it is neither against his government’s ‘Keluarga Malaysia’ policy nor is it at odds with the law.

“The key to the unity of Malay-Muslim based parties (Bersatu, Umno and PAS) also lies in his hands. He can spearhead it politically by honouring the MoA.”.

On May 26, Zuraida announced her exit from Bersatu to join the newly formed Parti Bangsa Malaysia (PBM). She has since been appointed PBM’s “president-designate”.

She was supposed to meet Ismail to discuss her position in the Cabinet, but she continues to issue statements and attend events as the plantation industries and commodities minister.

On June 21, Muhyiddin urged Ismail to quickly decide on Zuraida’s ministerial position, saying the party was also waiting to meet him since it had a candidate to replace her.

Bersatu’s leadership had previously said Zuraida should be replaced by someone from the party because the ministerial position was under its Cabinet quota.

Last week, PN also voiced disappointment over Ismail’s apparent failure to fulfil the promises he had made to the coalition.

Yesterday, PN secretary-general Hamzah Zainudin said he would meet Ismail today to discuss the agreement, a leaked copy of which said a deputy prime minister’s post had been promised to Bersatu.