The intensity of the situation across the Taiwan Straits has drastically escalated as the military deployment from the Chinese mainland, US and the island of Taiwan continues creeping up, after US and Taiwan-based media disclosed that US House Speaker Nancy Pelosi is expected to visit the island on Tuesday night, a serious provocation and violation to China’s sovereignty and territorial integrity which would be met with severe countermeasures from the Chinese military.

The Fujian Provincial Military Command neighboring Taiwan posted videos and pictures on Tuesday about a live-fire exercise, which aims to “test overall combat capability under complex conditions.” It said that the minuteman missile unit, anti-aircraft artillery unit, radar unit and other combat units participated in the exercise, the first time in recent years that a provincial military command has organized a multi-branch and multi-professional militia to conduct live fire.

As of Tuesday noon, flights at airports in several cities in Fujian province, including Xiamen, Fuzhou and Quanzhou, have been partially canceled, according to Xiamen Airlines, citing regional traffic control.

Some analysts said that as Pelosi’s aircraft may enter Taiwan’s self-claimed “air defense identification zone” along the east coast of Taiwan after departing from Malaysia, the Chinese mainland vessels appeared in an earlier time to occupy position and are closely monitoring Pelosi’s route.

Taiwan authorities are also preparing for the potential crisis caused by Pelosi’s visit. Local media on the island reported on Tuesday that the island’s military has entered a 3-day special “enhanced combat preparation period” from Tuesday morning to the noon of August 4, but the combat readiness level remains unadjusted to the peacetime period.

The military has also sent eight Mirage series fighter jets to the air force base in Taitung, increasing the totaling number of Mirage from 4 to 12 in the base. Besides, Chiayi base has sent the island’s helicopters air rescue group, dubbed “seagulls,” stationed in Taitung.

Global Times reporter learned from a Shanghai-based remote sensing geospatial analysis company Mizar Vision on Tuesday that Pelosi’s aircraft has arrived in Malaysia. And the data showed that US government chartered plane SPAR20 had also arrived in Malaysian airspace from Scott Air Force Base via Japan. Analysts said the move might serve to the escort mission during Pelosi’s Taiwan visit, or it may aiming to replace Pelosi’s previous plane.

Taiwan-based media pointed out that given PLA’s reaction, Pelosi’s aircraft may not have direct access to “flight information region (FIR) of Taiwan,” but will be through the FIR of the Philippines, heading northeast to the US Auckland Oceanic FIR in east of Taiwan island, and fly to Taipei through Japan’s FIR.

Chinese Foreign Ministry spokesperson Zhao Lijian on Monday sternly warned Pelosi’s potential visit to Taiwan, stressing that “the PLA will not sit idly by” and will take “resolute and strong countermeasures” to protect China’s sovereignty and territorial integrity. GT 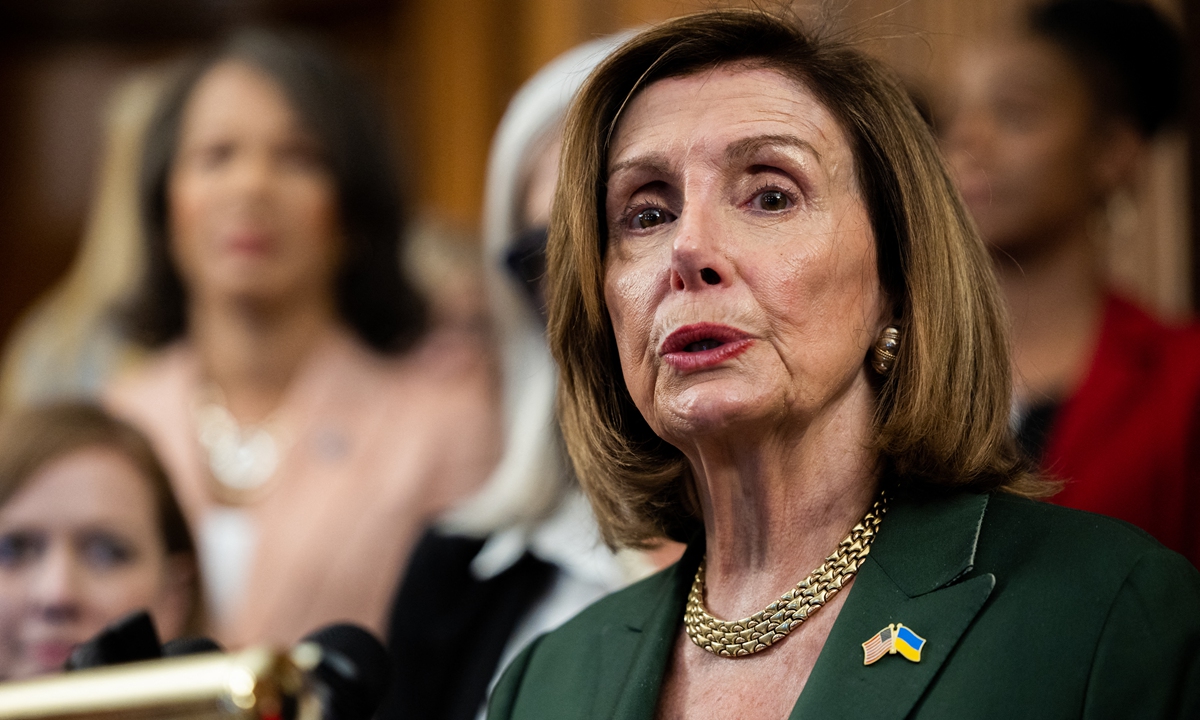 US House Speaker Nancy Pelosi is expected to arrive on the island of Taiwan on Tuesday night according to foreign media reports, with rising concerns and opposition over her trip within the island and increasing military activities by the Chinese mainland, the Taiwan authorities and the US military in the region. Analysts from both sides of the Taiwan Straits said this risky move will totally change the situation in the region, while the mainland will more actively dominate and speed up the reunification process with comprehensive measures including military and political actions, and these actions will let the US and the secessionist Democratic Progressive Party (DPP) authorities feel the pain.

There are many options on the table for China to speed up the reunification process. These could include striking Taiwan military targets, just as the PLA did in the previous Taiwan Straits crisis, pushing new legislation for  national reunification, sending military aircraft and vessels to enter the island’s “airspace” and “water areas” controlled by the Taiwan authorities and ending the tacit cease-fire with the Taiwan military.

Whether Pelosi can make her trip to Taiwan happen or not, there is no reason for China to be nervous, because such a political show will not change the overwhelming advantages, especially the military one, held by the mainland against the Taiwan authorities and the US in the region. Nor will the trip provide any possibility of “Taiwan independence,” and it cannot change the unshakable hard fact that Taiwan is part of China, said experts, noting that what China needs to do is to use this incident to maximize its advantage and keep pushing the reunification process.

Hua Chunying, a spokesperson of the Ministry of Foreign Affairs, said at a routine press conference on Tuesday that “it was the US who takes the provocative action first and has caused the escalation of Taiwan Straits tension. The US should and must take full responsibility for this.”

Both of aircraft carriers of the PLA Navy have reportedly moved out from their homeports respectively amid Pelosi’s possible visit to the island of Taiwan, which media reported could happen on Tuesday evening.

Some analysts said that as Pelosi’s aircraft may enter Taiwan’s self-claimed “air defense identification zone” along the east coast of Taiwan after departing Malaysia, the Chinese mainland vessels appeared earlier to get into position and are closely monitoring Pelosi’s route.

A military expert who asked for anonymity told the Global Times that with the participation of the aircraft carriers, the PLA could conduct more effective intercept operations, because it will take longer for fighter jets to be launched from airports in the mainland to arrive in the areas to the east or south of Taiwan island, while the shipboard aircraft will be more flexible as long as the fleets have arrived in the relevant region.

As of Tuesday noon, flights at airports in several cities in Fujian Province, including Xiamen, Fuzhou and Quanzhou, have been partially canceled, according to Xiamen Airlines, citing air traffic control.

US military forces are also taking actions. Four US warships, including an aircraft carrier, were positioned in waters east of the island on “routine” deployments, Reuters reported on Tuesday.

Aircraft carrier the USS Ronald Reagan (CVN-76) and big deck amphibious ship USS Tripoli (LHA-7), with Marine F-35B Lighting II Joint Strike Fighters embarked, are operating in the vicinity of Taiwan, on the edge of the South China Sea, according to the August 1 edition of the USNI News Fleet and Marine Tracker.

A Pentagon spokesperson told USNI News on Monday that the ships were operating normally in the region and would not detail force protection measures for the visit of the third-highest ranking US official to the region.

Concerns within the island

But there is still a possibility that Pelosi could eventually land on the island due to complicated reasons, as Taiwan media also reported that due to security concerns, the DPP authorities once withdrew the “invitation” to Pelosi, but due to Pelosi’s pressure, the authorities eventually compromised and make arrangement for her trip.

Many Taiwan web users complained how Pelosi could be so arrogant and bossy, to force Taiwan to play in a show with her. “After the show you will go back to the US, but what about the mess you leave here in Taiwan?” said a web user.

Hung Hsiu-chu, former chairwoman of the KMT, the major opposition party within the island, said there are two different views on Pelosi’s trip to Taiwan – one group do not want Pelosi to come and do not know why she would come as this could only add conflicts for the Chinese mainland, the US and Taiwan. Another group think that if Pelosi wants to support Taiwan secessionism, she could let the House pass an act to recognize “Taiwan independence,” so why would she come to the island to create such a big mess?

Some also consider that the US is tolerating Pelosi’s risky move to test the bottom-line set by the Chinese mainland, Hung said, noting that “God bless, hopefully nothing bad will happen.”

Taiwan Taoyuan International Airport received a threatening letter on Tuesday morning which claimed that “three explosive devices have been placed at the airport to stop the US House Speaker’s visit to Taiwan,” media reported. The New Party, a pro-reunification political party in the island, and some civil society groups plan to protest at the Grand Hyatt Hotel in Taipei where it is believed Pelosi will stay if she visits the island, according to media reports.

The DPP authorities and the many senior politicians are keeping silent without any high-profile preparation for welcoming Pelosi, as analysts said this reflects the high concerns within the island. Pelosi’s visit is creating great troubles but due to the weak position of the DPP authorities in front of the US, the island must cooperate and has no room to make independent decisions.

What the mainland can do

Chinese analysts said the struggle between China and the US at this point is about dignity and concrete strategic interests, but the latter is much more important, so China will not merely focus on playing a game of chicken and hawk with Pelosi, as changing the whole situation of the region is much more significant and valuable.

The Chinese mainland really knows the importance of “strategic patience,” just like when many people expected that China would crack down on the Hong Kong turmoil in 2019 with force when rioters attacked the central government’s liaison office, but the facts prove that China did not act in that way but eventually realized a land-slide victory to reinforce its governance in Hong Kong. “So this time, China will teach the US a lesson again, as it will use US mistakes to comprehensively change the Taiwan Straits situation, just as it did in Hong Kong in recent years,” said a Beijing-based senior expert on international relations who asked for anonymity.

Wang Jiangyu, a professor of law at the City University in Hong Kong, said China will use this incident to strengthen its sovereignty claim over Taiwan. “For instance, sending squadrons of military aircraft to enter the ‘airspace’ of Taiwan, or sending military vessels to enter the ‘water areas’ controlled by the Taiwan military,” he said.

These are unprecedented acts of declaring sovereignty over Taiwan, and if China can send its signal of determination to effectively contain the provocations made by the US and other Western countries, the situation will be in favor of the Chinese side in the future, Wang said.

Lü Xiang, a research fellow at the Chinese Academy of Social Sciences, told the Global Times on Tuesday that China’s reaction will not just a momentary action but will consider the whole security mechanism of Taiwan.

“The Chinese mainland could exercise its sovereignty and rights of control over the airspace on the island and adjacent sea areas around the island, to make sure there will be no another case like ‘Pelosi’s visit’ that could happen again, and to better safeguard national sovereignty,” he said.

Song Zhongping, a Chinese military expert and TV commentator, said based on the experience of the previous Taiwan Straits crisis, the PLA will strike Taiwan military targets but will not directly fire at US targets, so it is possible that the PLA will strike some Taiwan military targets this time as well, and the mainland could also consider speeding up legislation for a national reunification law and even publish a timetable for reunification which will impose real pressure on the US and Taiwan authorities.