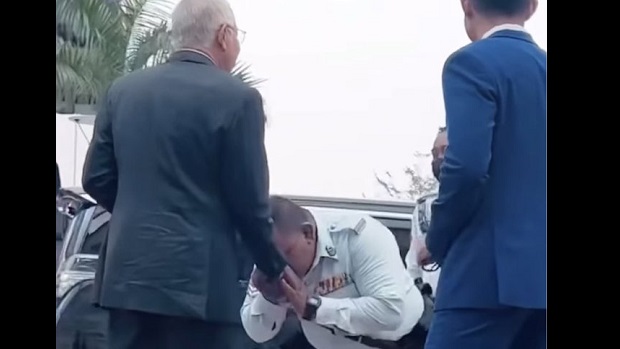 A traffic police officer seen kissing the hand of former prime minister Najib Abdul Razak recently has prompted artists to produce their own renditions of the scene.

A video of the incident at Parliament last month was uploaded by Najib’s special officer Mukhlis Maghribi on Instagram.

It has since been removed but not before screenshots of it went viral on social media.

One of them can be found in a tweet by former journalist @nizambakeri, who posted the image and said “Malaysia in a nutshell”.

Cartoonist Zunar published a comic strip showing police chasing a thief resembling Najib, but instead of catching him, the police officer kissed his hand.

The cartoon featured the words “Cash is king – Mengampu adalah budaya kita”. (Bootlicking is our culture)

A spokesperson from the police headquarters in Bukit Aman, Kuala Lumpur, in response to a media request for a comment on the matter, said they were “getting information from the relevant departments.”

Najib became the country’s sixth prime minister in 2009 and led the BN federal government to its defeat in 2018, which was largely linked to his involvement in and handling of the 1MDB financial scandal.

He was later slapped with multiple corruption charges in court related to 1MDB and its subsidiary SRC International Sdn Bhd.

On July 28, 2020, the Pekan MP was found guilty of seven charges by the Kuala Lumpur High Court, which sentenced him to 12 years in jail and fined him a total of RM210 million.

On Dec 8 last year, the Court of Appeal, after hearing Najib’s appeal, upheld the conviction and sentences.

Najib has since filed another appeal to the Federal Court, which is set to hear his final appeal for 10 days beginning Aug 15.