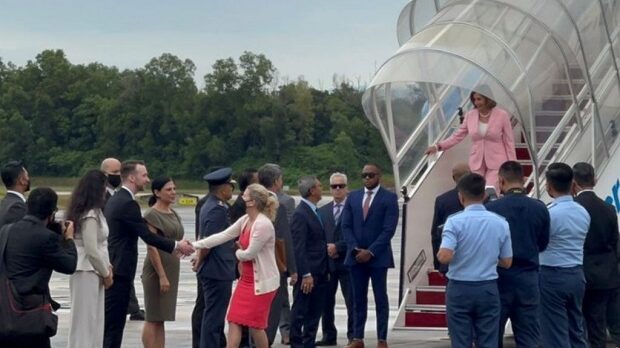 TAIPEI — US House of Representatives Speaker Nancy Pelosi was expected to arrive in Taipei later today, people briefed on the matter said, as several Chinese warplanes flew close to the median line dividing the Taiwan Strait, a source told Reuters.

China has repeatedly warned against Pelosi going to Taiwan, which it claims as its own, and the United States said yesterday that it would not be intimidated by Chinese “sabre rattling” over the visit.

In addition to Chinese planes flying close to the median line of the sensitive waterway this morning, several Chinese warships had remained close to the unofficial dividing line since yesterday, the source told Reuters.

Off to lunch with PM Ismail Sabri together with speaker Azhar Harun .The lady in pink Nancy Pelosi has left the Parliament building . Still no clarity whether she’s heading to Taiwan tonight . pic.twitter.com/skwHJwpALk

In a statement today, Taiwan’s Defence Ministry said it has a full grasp of military activities near Taiwan and will appropriately dispatch forces in reaction to “enemy threats”.

China’s defence and foreign ministries did not immediately respond to requests for comment.

In the southeastern Chinese city of Xiamen, which lies opposite Taiwan and is home to a large military presence, residents reported sightings of armoured vehicles on the move today and posted pictures online.

Chinese social media was abuzz with both trepidation about potential conflict and patriotic fervour over the prospect of unification with Taiwan, and the topic of Pelosi’s visit was the top-trending item on the Twitter-like Weibo.

One person familiar with Pelosi’s itinerary said that most of her planned meetings, including with President Tsai Ing-wen, were scheduled for tomorrow, and that it was possible that her delegation would only arrive in Taiwan early tomorrow.

“Everything is uncertain,” the person said.

Taiwan newspaper Liberty Times said Pelosi’s delegation was due to arrive at 10.20pm (1420 GMT) on Tuesday, without naming sources.

Pelosi was visiting Malaysia today, having begun her Asia tour in Singapore today. Her office said she will also go to South Korea and Japan, but made no mention of a Taiwan visit.

Taiwan’s foreign ministry said it had no comment on reports of Pelosi’s travel plans, but the White House — which would not confirm the trip — said she had the right to go.

Beijing’s responses could include firing missiles near Taiwan, large-scale air or naval activities, or further “spurious legal claims” such as China’s assertion that the Taiwan Strait is not an international waterway, White House national security spokesperson John Kirby told reporters in Washington yesterday.

“We will not take the bait or engage in sabre rattling. At the same time, we will not be intimidated,” Kirby said.

Four sources said Pelosi was scheduled to meet a small group of activists who are outspoken about China’s human rights record tomorrow afternoon.

The meeting is likely to take place at the National Human Rights Museum at New Taipei City, according to a source with direct knowledge of the matter.

Yesterday, Chinese foreign ministry spokesperson Zhao Lijian said it would be “a gross interference in China’s internal affairs” if Pelosi visits Taiwan, and warned that “the Chinese People’s Liberation Army will never sit idly by.” Asked what kind of measures the PLA might take, Zhao said: “if she dares to go, then let us wait and see.” China views visits by US officials to Taiwan, a self-ruled island claimed by Beijing, as sending an encouraging signal to the pro-independence camp in the island. Washington does not have official diplomatic ties with Taiwan but is bound by US law to provide the island with the means to defend itself.

A visit by Pelosi, who is second in the line of succession to the US presidency and a long-time critic of China, would come amid worsening ties between Washington and Beijing.

The White House has dismissed China’s rhetoric as groundless and inappropriate.

Kirby said that nothing about Pelosi’s possible trip changed US policy toward Taiwan, and that Beijing was well aware the division of powers within the US government meant Pelosi would make her own decisions about the visit.

“The speaker has the right to visit Taiwan,” he told the White House briefing.

During a phone call last Thursday, Chinese President Xi Jinping warned US President Joe Biden that Washington should abide by the one-China principle and “those who play with fire will perish by it”.

Biden told Xi that US policy on Taiwan had not changed and that Washington strongly opposes unilateral efforts to change the status quo or undermine peace and stability across the Taiwan Strait.

Beijing considers Taiwan to be part of its territory and has never renounced using force to bring the island under its control. Taiwan rejects China’s sovereignty claims and says only its people can decide the island’s future. ¬— Reuters

Buzz of excitement at Parliament during Nancy Pelosi’s visit 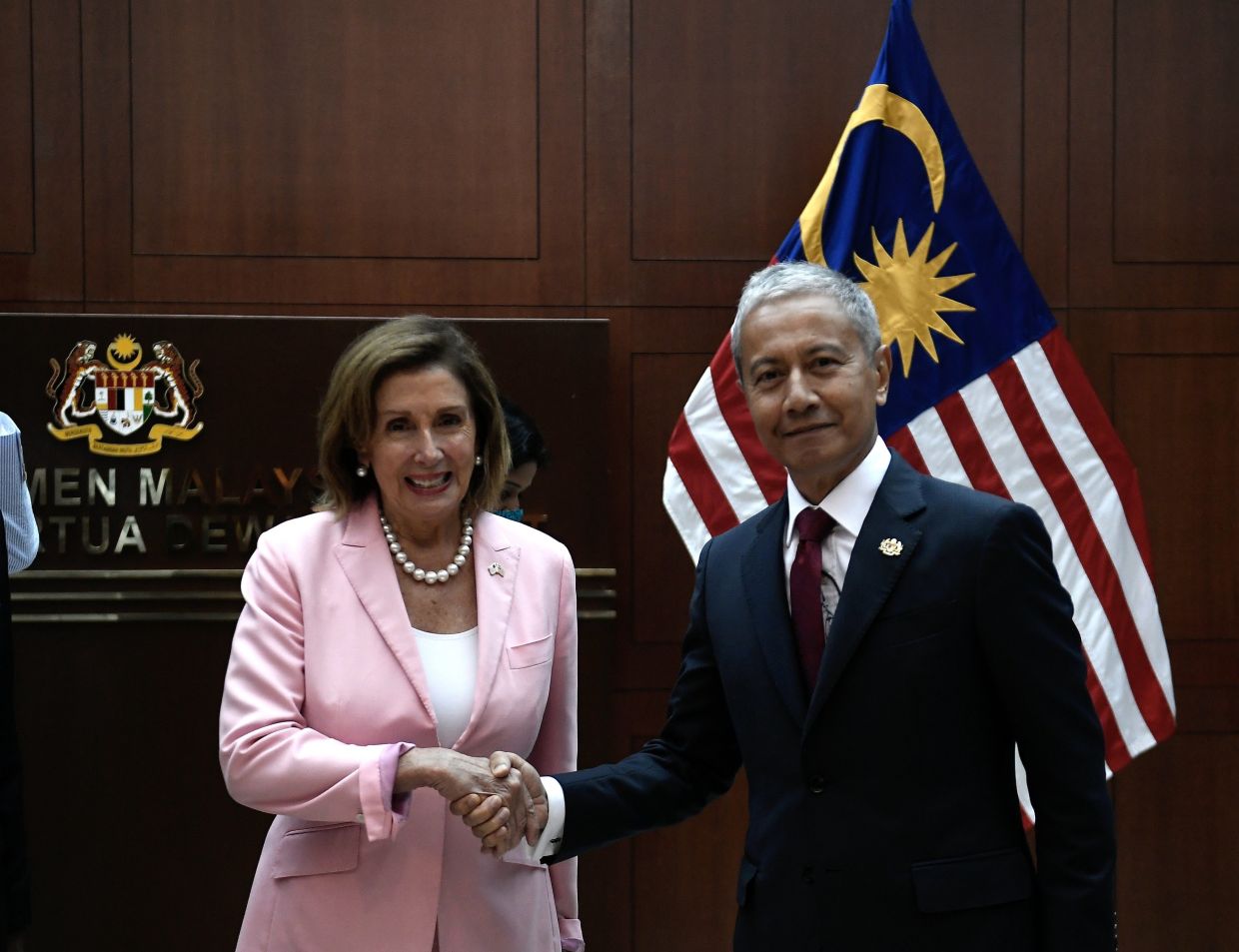 Azhar (right)shaking hands with Pelosi at the Dewan Rakyat on Tuesday (Aug 2). – Bernamapic

KUALA LUMPUR: There was a buzz of excitement at the Parliament building on Tuesday (Aug 2) during the visit by United States House of Representatives Speaker Nancy Pelosi.

Security was tight with sections of Parliament building cordoned off as Pelosi arrived with a congressional delegation.

Among those on hand to welcome Pelosi and her delegation were Dewan Rakyat Speaker Tan Sri Azhar Azizan Harun and several Members of Parliament when they arrived at about 11.45am.

She spent about an hour holding talks with Azhar before adjourning for a luncheon meeting with Prime Minister Datuk Seri Ismail Sabri Yaakob at a leading hotel here.

Pelosi, 82, who was dressed in pink, was spotted leaving Parliament building at about 12.50pm.

Azhar, who was seen leaving his office soon afterwards, gestured the “thumbs up” when asked on Pelosi’s courtesy call.

“It was a good bilateral talk,” he said while walking off.

Her visit to Parliament also saw two issues raised in Dewan Rakyat which had direct links to the US.

Among them was the tabling of a report by Home Minister Datuk Seri Hamzah Zainudin on the human trafficking report.

The report comes after the nation continues to remain under Tier Three of the Trafficking in Persons Report July 2022 based on the US Department of State annual report which was released last month.

Also raised was Malaysia’s efforts to fulfil the US Federal Aviation Administration (FAA) safety status following a downgrade from Category 1 to Category 2 in November 2019.

Transport Minister Datuk Seri Dr Wee Ka Siong informed the House that the nation was on track to fulfil the FAA’s 29 findings with an announcement to be made by the US aviation authorities later this month.

Meanwhile, when wrapping up his replies on the report, Hamzah said that the tabling of the report on human trafficking had nothing to do with Pelosi’s visit to Parliament.

“It has nothing to do with her visit. In fact, I spoke to the Dewan Rakyat Speaker about tabling a report on the issue two days after the report was released by the US Department of State.

“I requested a week for me to prepare the report,” he said. The report was released on July 20.

Several opposition MPs questioned the timing of the report tabled by Hamzah which was not included in Parliament’s Standing Order.

It is Pelosi’s maiden visit to Malaysia with Gregory Meeks, chair of the House Foreign Affairs Committee, also in the delegation list.

Pelosi is number three in the line of US presidential succession and the only woman who has served as the Speaker of US house.

Kuala Lumpur is Pelosi’s second stop after Singapore on Monday before she heads to South Korea and Japan with her tour being closely watched to see if Taiwan is also in her itinerary. ANN