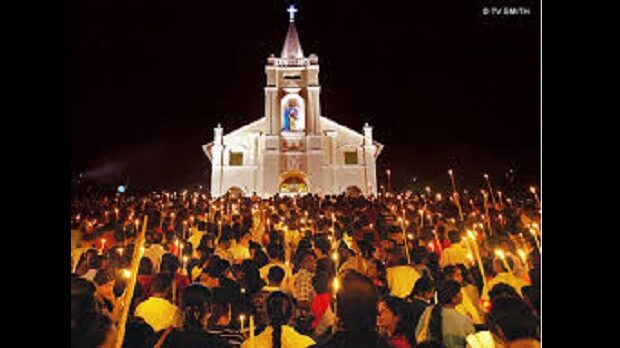 BUKIT MERTAJAM: Upon observing the statue of St Anne and her daughter the Virgin Mary in procession, Daniel Tang says he came to understand the religious significance of the feast held in honour of this Christian saint.

A college student in Bandar Perda near here, Tang brought his girlfriend Chin Mei Ling, 19, a student from Padang Serai, Kedah, to the feast on Saturday night.

It was their first time and they were two out of nearly 100,000 pilgrims who came to the 10-day annual St Anne’s Novena and Feast here.

“We were so excited to attend the feast and the procession. From now on, we will come every year,” said Tang, 20.

Jeslyn Jacob, 26, an accountant from Cheras, Kuala Lumpur, said she had been attending the feast every year since her schooldays, but missed out the last two years due to the pandemic.

“It is so good to be back to pray. We are Catholics and it is our family tradition to attend the feast annually,” she said.

K. Deva Mary, 39, an accounts executive from Shah Alam, has happy memories of her parents bringing her to the feast every year during her childhood.

But she had given the feast a miss over the last five years because of work commitments.

“Now that we are vaccinated and moving towards treating Covid-19 as an endemic disease, it felt important for me to come and pray.

Many pilgrims came from other countries too, including Elizabeth Smith, 37, a nurse from Medan, Indonesia.

“I heard about the St Anne’s Feast from a friend and decided to come here for the first time to experience it,” she said.

Church deacon Reverend Lazarus Anthony Jonathan said the crowd this year was bigger than ever.

Pilgrims enjoyed free meals provided by the church throughout the 10-day event.

“Pilgrims filled our church for every novena and mass in the 10 days, which were held in English, Bahasa Malaysia, Mandarin and Tamil at separate sessions.

“Despite the drizzle which started at about 9pm and lasted till the end, the crowd stayed and followed the procession holding candles,” he said, adding that the procession route was 6.5km.

The procession has been a tradition and a significant event for the town as it passes by several major streets.

In 2019, about three months before Covid-19 was first detected, the Pope raised the church to the status of a “Minor Basilica”.

For some pilgrims, going to the feast was even more special.

I. Nasrathammal, 57, from Arau, Perlis, had a blockage in her heart but she survived the ordeal after receiving treatment.

In spite of her poor health, she made it to the feast to pray for good health with her husband Joseph Francis, 59.

St Anne is recognised as the grandmother of Jesus Christ.