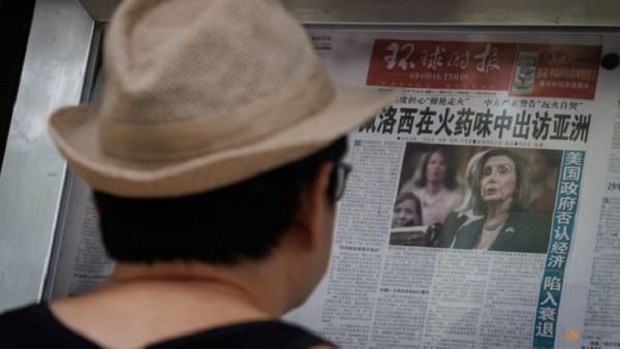 US, world key figures warn Pelosi against risky trip, as her Asia itinerary has no mention of Taiwan

US House Speaker Nancy Pelosi has finally announced her Asia trip plan on Sunday that includes Singapore, Malaysia, South Korea and Japan with no mention of Taiwan, but this is still far from being able to give a sigh of relief and the potential danger still exists, said experts, as she might also try to make surprise visit to the island during her Asia trip, noting that no matter what happens, China will keep high alert to be fully prepared for military conflict.

Efforts from relevant parties should continue and be strengthened until the crisis is totally averted after Pelosi finishes her trip to Asia amid China’s powerful military determination, diplomatic efforts and clear warning signals, as well as persuasion from the White House, the Pentagon, rational US scholars and politicians including former US president Donald Trump, as well as Russian Foreign Ministry Spokesperson Maria Zakharova, Chinese experts said.

It is still possible that Pelosi wants to make a risky and dangerous move by trying to land at a Taiwan airport with emergency excuses like an aircraft fault or refueling, so the Chinese military patrols, radar detections and relevant drills should still keep at high alert in coming days, said analysts.

If Pelosi’s plane really has emergency problems during her trip around China, the People’s Liberation Army (PLA) aircraft can provide protection to her plane and let her land at airports in China’s Sansha city, Hainan Province in the South China Sea, or other airports in the Chinese mainland which could provide professional services and assistance, as long as the speaker’s plane stays away from China’s Taiwan.

According to a press release by the website of the House Speaker, Pelosi is leading a “Congressional delegation to the Indo-Pacific region, including visits to Singapore, Malaysia, South Korea and Japan. The trip will focus on mutual security, economic partnership and democratic governance in the Indo-Pacific region.”

The Singaporean media Straits Times reported on Sunday that a US congressional delegation led by Pelosi will visit Singapore from Monday to Tuesday. The delegation will call on President Halimah Yacob and Prime Minister Lee Hsien Loong, and meet a number of Cabinet ministers, a spokesperson for Singapore’s Ministry of Foreign Affairs said on Sunday.

That Pelosi did not directly mention Taiwan in her itinerary means she does not dare directly and publicly challenge China, but the possibility of her visiting Taiwan without any announcement in transfers between any of the four stops in Asia cannot be ruled out, Diao Daming, an associate professor at the Renmin University of China in Beijing, told the Global Times.

Japan as a close ally of the US is the last stop which makes us wonder why, as this might allow Pelosi to make an extra surprise arrangement out of the announced plan, since Japan is geographically close to the island of Taiwan, Diao noted.

Lü Xiang, an expert on US studies at the Chinese Academy of Social Sciences, told the Global Times on Sunday that the announced plan with no mention of Taiwan could be a result of communication between Pelosi and the White House, the Pentagon and the US Joint Chiefs of Staff.

“More importantly, after the phone conversation between the Chinese and US presidents, especially the words from the Chinese leader who said that ‘those who play with fire will perish by it,’ the warning from the Chinese side has been further strengthened, which means the US side has to exercise caution on this matter,” he said.

Persuasions and criticisms
Many US key figures and media have joined the effort to persuade or warn Pelosi not to make a dangerous move on the Taiwan question.

Unlike many Republicans who “encourage” but in fact pressure Pelosi to go to the island of Taiwan, Trump on Friday criticized Pelosi’s potential trip to Taiwan. Trump said on his social media platform Truth Social that “Why is Nancy Pelosi getting involved with China and Taiwan other than to make trouble and more money, possibly involving insider trading and information, for her cheatin’ husband?”

“Everything she touches turns to Chaos, Disruption, and ‘Crap'”… and “the China mess is the last thing she should be involved in – She will only make it worse. Crazy Nancy just inserts herself and causes great friction and hatred. She is such a mess!” Trump said. 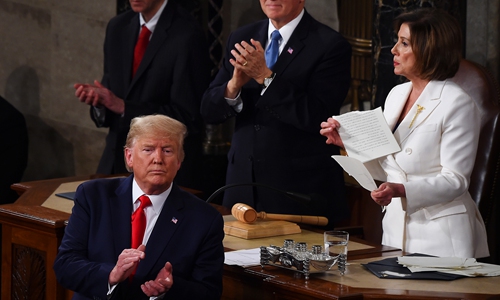 Speaker of the US House of Representatives Nancy Pelosi (right) rips a copy of President Donald Trump’s (front) speech after he delivered the State of the Union address at the US Capitol in Washington DC on Tuesday. Photo: AFP

Two influential American scholars on international relations Bonnie Glaser, who’s being hawkish toward China on Taiwan question, and Zack Cooper also wrote an article published by The New York Times titled “Nancy Pelosi’s Trip to Taiwan Is Too Dangerous” on Thursday. They said “The United States and China are on a collision course in the Taiwan Strait,” and “A single spark could ignite this combustible situation into a crisis that escalates to military conflict. Nancy Pelosi’s visit to Taiwan could provide it.”

Lü said from the military who first said Pelosi’s trip to Taiwan “is not a good idea,” to Trump who also sees the danger of her potential plan, it is clear to see that except  those Congress members, mainly Republicans and some Democrats, who love to see a messier situation for the world and the US under the leadership of the Biden administration or hijacked by the sick anti-China political correctness among Washington, those who can think independently, even they are from different camps, would all understand how dangerous it would be if Pelosi really goes to the island. 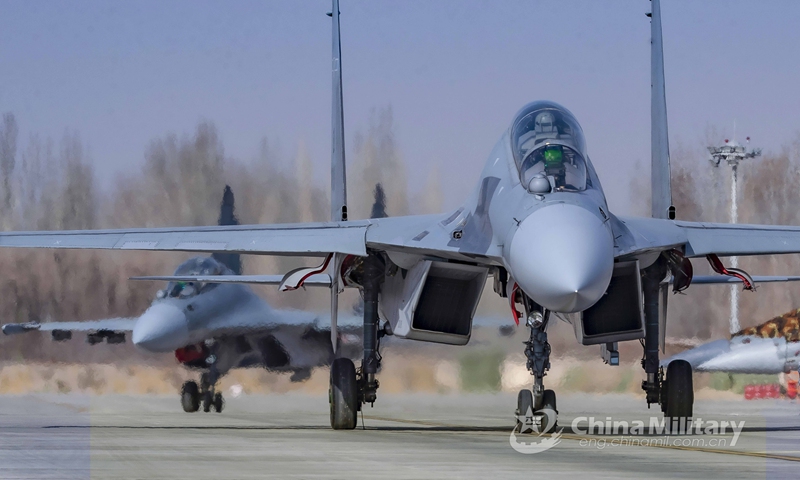 Stay alert
Due to the sensitivity of the trip and the concern over a surprise landing on the island of Taiwan, about 100,000 netizens worldwide are tracking a plane which believed carried Pelosi’s delegation on Fightradar24, a global flight tracking service website that provides real-time information about thousands of aircraft around the world, the media reported on Sunday.

This means that the world is still worried about the possibility of a surprise move by Pelosi even though her announced plan did not mention Taiwan, analysts said.

A Beijing-based expert on international relations who asked for anonymity said that if Pelosi really wants to go to Taiwan, she would not let the world know the details as she is clear about the danger and has noticed China’s warning, so she has to be sneaky.

“Therefore, China will still keep the military preparations to stop any surprise move by Pelosi in the coming days, and this will give her no chance to challenge China’s sovereignty,” the expert said, noting that the crisis alert could only be switched off after the US House Speaker finishes her Asia trip and returns to the US.

Lü said Taiwan is a forbidden zone for Pelosi’s plane, this is absolutely clear, so if her plane really has some emergency problems and has to land somewhere during her flight, “the PLA fighter jets in the region will provide her protection and bring her to China’s airports in Sansha city, Hainan Province in the South China Sea or other places in the mainland. We can provide her world-class service and assistance, as long as she stays away from the untouchable red-line – landing in Taiwan.”  GLOBAL TIMES 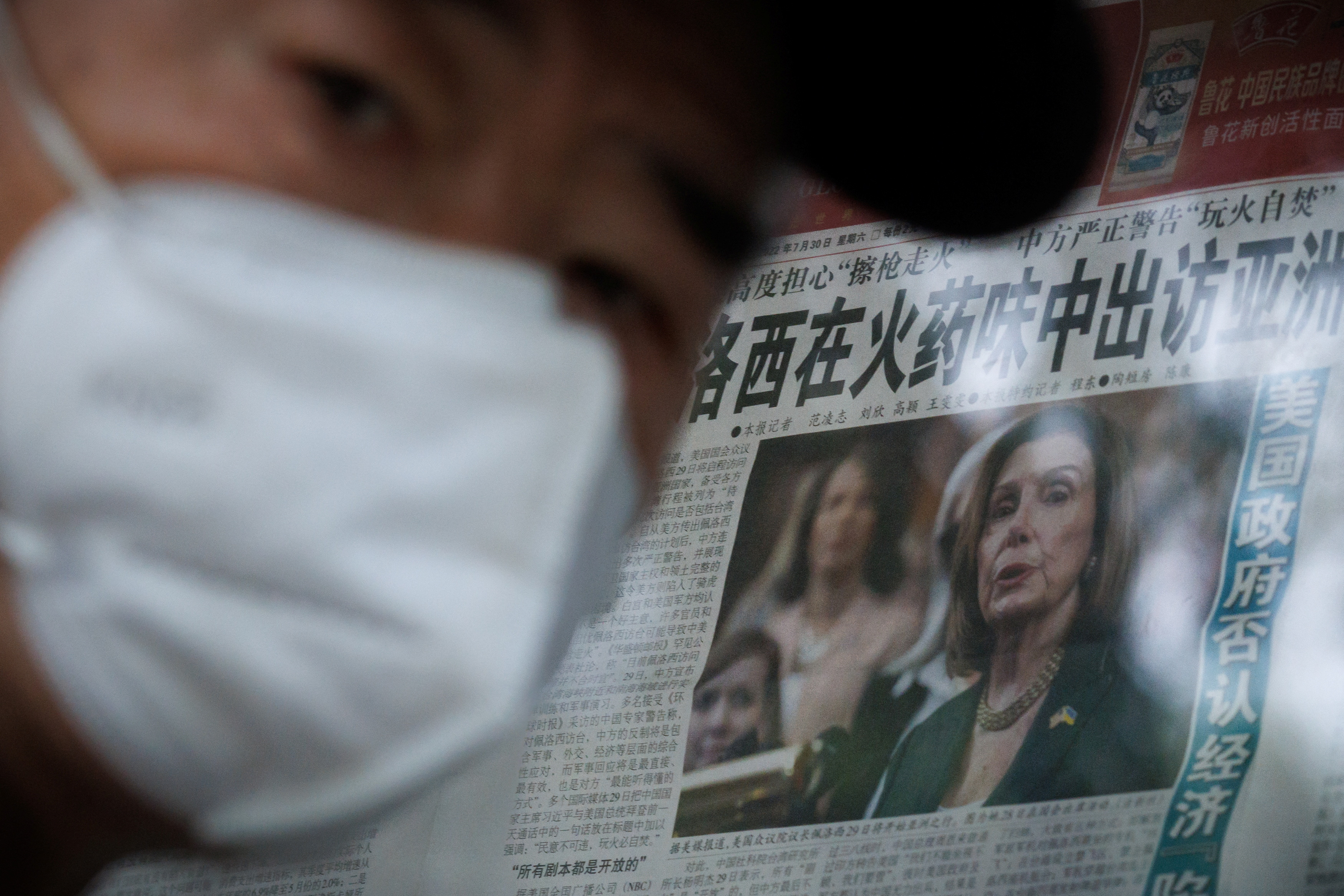 SINGAPORE, Aug 1 (Reuters) – U.S. House of Representatives Speaker Nancy Pelosi was set to kick-off a tour of four Asian countries on Monday in Singapore amid intense speculation that she may risk the wrath of Beijing by also visiting Taiwan, the self-ruled island claimed by China.

On Sunday, Pelosi’s office announced that she was leading a Congressional delegation to the region that would include visits to Singapore, Malaysia, South Korea and Japan. It made no mention of Taiwan.Report an ad

China views visits by U.S. officials to Taiwan as sending an encouraging signal to the pro-independence camp in the island. Washington does not have official diplomatic ties with Taiwan but is bound by law to provide the island with the means to defend itself.

A visit by Pelosi, who is third in the line of succession to the presidency and a long-time critic of China, would come amid worsening ties between Washington and Beijing. Republican Newt Gingrich was the last House speaker to visit Taiwan, in 1997.

During a phone call last Thursday, President Chinese Xi Jinping warned his U.S. counterpart Joe Biden that Washington should abide by the one-China principle and “those who play with fire will perish by it”.

Biden told Xi that U.S. policy on Taiwan had not changed and that Washington strongly opposes unilateral efforts to change the status quo or undermine peace and stability across the Taiwan Strait. read more

On Monday, Taiwan Premier Su Tseng-chang did not directly respond when asked whether Pelosi will visit on Thursday, as local media have speculated.

“We always warmly welcome visits to our country by distinguished foreign guests,” he told reporters in Taipei.

Pelosi’s delegation was to visit Singapore on Monday and Tuesday and would meet with officials including Prime Minister Lee Hsien Loong, Singapore’s foreign ministry said. The American Chamber of Commerce in Singapore was scheduled to host a reception with her on Monday afternoon, its website said.

Shen said at a military airshow that the air force has many types of fighter jets capable of circling “the precious island of our motherland”, referring to Taiwan.

Beijing considers Taiwan to be part of its territory and has never renounced using force to bring the island under its control.

Xi is expected to secure a precedent-breaking third leadership term later this year during a once-in-five-years congress of the ruling Communist Party. In the United States, Biden’s Democratic Party faces a hard fight to retain control of the House of Representatives at November’s midterm elections.