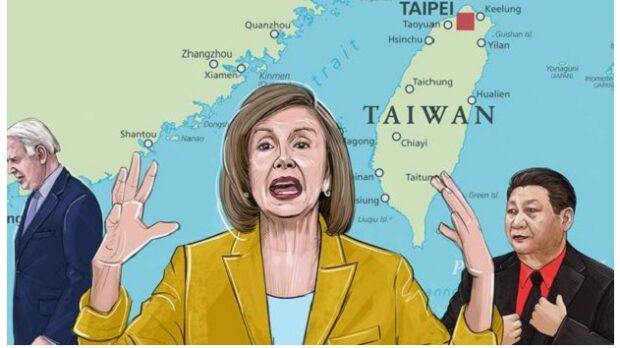 The point is every time a new American president steps into the White House they can back pedal and flip flop on international treaties and agreements which they themselves had entered into before – and bullied other countries like Malaysia to sign on as well.

Did you know that in America they frequently call Nancy Pelosi ‘The Witch’? Others call her the b-tch. This is not a popular person. Anyway the latest news is that the United States blinked first in the standoff over Taiwan and they have chickened out from visiting Taiwan. Here is some quick news:

The shocker for me is that Nancy the Witch is visiting Malaysia. For starters Nancy Pelosi has little influence in America. Despite being the Speaker of the House of Representatives (and third in line to replace the President) Nancy is more bark than bite. She can ring the bell to summon the Congressmen from the yard. Not much else.

Her President Joe Biden is also proving to be a first class moron. Biden’s popularity is the lowest of any US president since Harry Truman (post World War 2). Biden has an approval rating of only 37% among Americans!!

In Asia, the Philippines and Indonesia have dumped the US as an opinion leader or as a reliable partner.

Singapore plays a careful game because the US Naval Base at Changi brings in big money for Singapore’s shipbuilding and ship repair business. 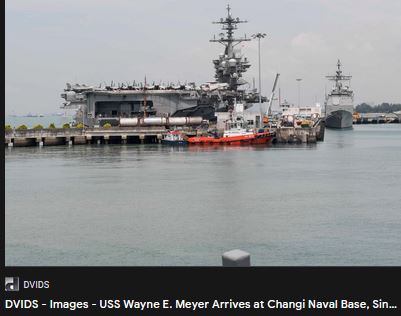 A US Navy aircraft carrier at Changi Naval base. Within range of DF17 and DF21. Saudi Arabia has dumped the United States because of American hypocrisy. After calling the Saudi’s ‘pariahs’ US President Joe Biden went crawling to Saudi Arabia (where both the King and Crown Prince did not even welcome him at the airport) to beg the Saudis to increase their oil production. The Saudis said no.

After 20 years invading and occupying Afghanistan the Americans turned chicken and  abandoned Afghanistan to the Taliban.

The Americans also quit from Iraq – also after about 20 years.

Recall the TPPA under Obama? That Trans Pacific bullshit partnership? For years they were harrassing Malaysia and so many other countries to sign onto the TPPA crap.

All the uselesss town hall meetings that were held here and the Special Interest Group meetings (I was invited to attend two of them) were just a waste of our time and created unnecessary argument among Malaysians.

I recall asking Dato Mustapa Mohamed (who chaired those meetings) ‘Can you list 5 or 10 advantages for Malaysia from signing the TPPA?’ Dato Mustapa could not answer.

Then lo and behold, Donald Trump became president and he dumped the whole TPPA idea in the garbage. And that was the end of that.

We in Malaysia had wasted so much time debating about the TPPA which the Americans themselves finally threw in the garbage.

Long before that  in 2001 the Bush Administration pulled out from the Kyoto Protocol — the world’s first international climate treaty to reduce emissions.

Not only that, 16 years later : “On June 1, 2017, United States President Donald Trump announced that the U.S. would cease all participation in the 2015 Paris Agreement on climate change mitigation, contending that the agreement would “undermine” the U.S. economy, and put the U.S. “at a permanent disadvantage.”

Because Donald Trump said (quite correctly) that there was no global warming.

The point is every time a new American president steps into the White House they can back pedal and flip flop on international treaties and agreements which they themselves had entered into before – and bullied other countries like Malaysia to sign on as well.

Mr Putin keeps reminding the Americans that it was the United States of America that in 2001 unilaterally cancelled the Anti Ballistic Missile Treaty which they had signed with Russia in 1972 !!

Can you imagine – after 29 years the US just decided unilaterally to cancel a treaty which they had drafted and signed.

In 2001 president George W. Bush announced that the United States would withdraw from the Anti-Ballistic Missile (ABM) Treaty. This cornerstone of the Cold War arms control regime, signed in 1972, sought to cap the arms race..”

So the United States is a damned hypocrite when it comes to breaking agreements, abandoning their “allies” to die by themselves (Vietnam, Afghanistan, Iraq, Ukraine), breaking their own treaties, changing their policies  and all kinds of bullshit.

Obama said Russia and North Korea were basically “enemies” of the United States.  Then Donald Trump called Putin his best friend. Trump also became the first American president to visit North Korea – although it was just for a minute, stepping over the border.

Biden the Moron wants to run for re-election in less than 24 months. Donald Trump has also said he will run for the presidency again. If Donald Trump becomes president again you can rest assured that the fake and imaginary tensions with Russia and China will disappear. American policy will change yet again.

So what does Nancy Pelosi want from Malaysia? That we declare Russia an enemy? Post Soviet Union Russia has never done anything bad or wrong against us.  In fact they are our major trading partner.

Nancy Pelosi must be completely off her rocker if she thinks that Malaysia can be goaded into calling China our enemy. We have almost NINE million citizens in Malaysia who are also of Chinese origin.  We have a long and profitable trade relationship with China, thanks largely to our own Chinese citizenry.  Agree or not the China connection is our lifeblood.

So janganlah kagum sangat. It is just another Mat Salleh witch (like Madeleine Albright) flying in on her broomstick.