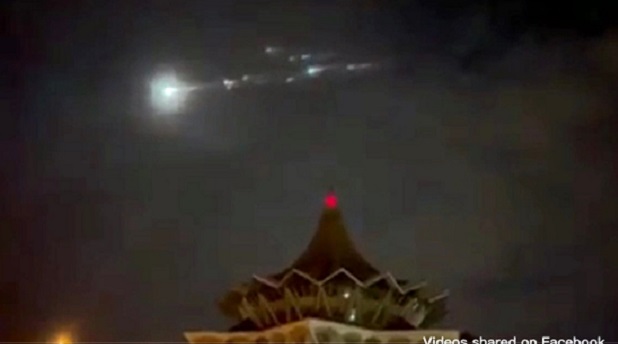 The China Manned Space Agency (CMSA) announced on Sunday that the Long March-5B Y3 carrier rocket reentered the Earth’s atmosphere with the vast majority of the device burning up during re-entry, the fifth statement the agency has made reporting the debris’ positions in the past week.

The announcement came amid US accusations against China over not sharing information on the trajectory of the rocket debris, which Chinese experts slammed as being groundless. They stressed that China has shown the most transparency to the international community by sharing predictions of the parameters of the trajectory of the rocket debris. The US has clearly known the facts and such smears come purely out of political purposes.

Debris from the upper stage of the Long March-5B Y3 carrier rocket reentered the atmosphere at 12:55 am on Sunday, with the vast majority of the device burning during re-entry, the CMSA said in a statement on Sunday. The remnants fell into the surrounding sea area at 119.0 degrees east longitude and 9.1 degrees north latitude, read the statement.

However, in a post on Twitter Sunday, NASA Administrator Bill Nelson accused China of not sharing “specific trajectory information” as the rocket fell back to Earth.

“All spacefaring nations should follow established best practices, and do their part to share this type of information in advance to allow reliable predictions of potential debris impact risk, especially for heavy-lift vehicles, like the Long March 5B, which carry a significant risk of loss of life and property,” he wrote.

The facts are that the CMSA had already issued four statements reporting the parameters of the upper stage debris of the Long March 5B Yao-3 carrier rocket, covering information of its height of perigee, height of apogee and inclination at different time points every day from Wednesday to Saturday.

“How could the US say that they do not know where the debris would fall after China had made public the relevant parameters?” asked Song Zhongping, a TV commentator who closely follows China’s space program.

“As the largest space power in the world, the US itself can accurately locate the falling point of the remnants given the high measurement and control technology of the country, coupled with the information China had already released. Therefore, its accusations against China are completely for the purpose of smearing and hype,” Song told the Global Times.

Cooperation between China and the US in the field of space is illegal due to the two restrictive clauses that the US imposed on China, namely the Cox Report and the Wolf Amendment.

“It is against the law in the US for China to report space information to the country. Therefore China has no obligation to disclose any information directly to the US. China has always made its space information available to the international community. Why does the US turn a blind eye to it?” he said.

However, it should be noted that up to now no casualty has been caused by the re-entry of Chinese rocket debris.

On the contrary, there have been many instances of large carrier rocket debris from the US having fallen into the sea and were not recovered. The country rarely issues warnings on the impact risk of Space X rocket debris, showing its double standards, Huang Zhicheng, a Chinese expert on aerospace science and technology, told the Global Times on Sunday.

Song also noted that debris from rockets launched by the US had landed in populated areas more than once.

The most recent was in July when a large piece of debris was found in the middle of a sheep paddock that could be linked to a large bang heard across the region earlier this month, ABC reported. Speculation was rife that it may have been caused by the SpaceX Dragon spacecraft re-entering earth’s atmosphere after it launched in November 2020.

China has responsibly taken a variety of measures to deal with rocket debris by tracking its path and accurately predicting where it would fall. If the landing site is not a no-man’s land, China will issue a warning in advance. China has a complete plan to ensure that nothing will go wrong, Song noted.  GLOBAL TIMES

PETALING JAYA: A huge piece of space junk – apparently from the Chinese Long March rocket has crashed down to Earth – with its fiery re-entry spotted by many over Sarawak skies.

The 22.5 tonne core stage of the Long March 5B rocket re-entered Earth’s atmosphere over the Indian Ocean at approximately 12.45am on Sunday (July 31), according to US space agency NASA.

“#USSPACECOM can confirm the People’s Republic of China (PRC) Long March 5B (CZ-5B) re-entered over the Indian Ocean at approx 10:45 am MDT on 7/30. We refer you to the #PRC for further details on the reentry’s technical aspects such as potential debris dispersal+ impact location,” tweeted the US Space Command on Sunday.

The dramatic event was spotted by many people in Sarawak, with videos being uploaded to social media from users from Sibu, Bintulu, Kuching and more. Many did not realise what they were witnessing, with some even labelling it a “meteorite”.

“Meteor spotted in kuching! #jalanbako 31/7/2022,” said Nazri Sulaiman (@nazriacai) on Twitter, although he later corrected himself to say that it was the remains of the Long March rocket.

Hanif also stated later that it was the Long March rocket and said that an “explosion” was heard over Kuching.

“There is a long streak of clouds … the people of Kuching have reported hearing the explosion an hour ago,” he tweeted.

According to astrophysicist and satellite tracker Jonathan McDowell from the Harvard-Smithsonian Center for Astrophysics: “The video from Kuching implies it was high in the atmosphere at that time — any debris would land hundreds of km further along track, near Sibu, Bintulu or even Brunei.

“It’s ‘unlikely but not impossible’ that one or more chunks hit a population centre,” he said in a series of tweets.

The Malaysian Space Agency (Mysa) had previously said that the debris from the rocket was unlikely to land in Malaysia.

“Due to the strong atmospheric drag to the orbit, the debris is expected to enter the Earth’s atmosphere a few days after the launch.

“Basically, the location of the re-entry of the debris can’t be predicted accurately until a few hours prior to re-entry and in many cases, there will be a vast difference in the forecast due to the change in the physical characteristics of the object during re-entry, including location and speed,” it said in a statement on Friday (July 29) adding that most of the debris would be burnt during re-entry into the Earth’s atmosphere, with only smaller fragments landing on Earth.

“As such, the public need not be concerned about the dangers as 70% of it was water and Malaysia was a small entity compared to Earth’s mass area.

“Furthermore, the exact location of the re-entry currently can’t be ascertained and Mysa will update on any development from time to time, ” it added.

The Long March 5B blasted off July 24 to deliver a laboratory module to the new Chinese space station under construction in orbit, marking the third flight of China’s most powerful rocket since its maiden launch in 2020.

The Science, Technology and Innovation Ministry said Mysa, as informed by the Chinese Space Agency, stated that the re-entry of the Chinese Long March 5B rocket debris into Earth’s atmosphere was detected at 12.55am.

“The rocket’s debris burned up when entering the Earth’s atmosphere and the movement of the debris could be detected in several areas, with some crossing Sarawak’s airspace.

“The burning debris fell into the Sulu Sea in the area between latitude 9.1° North and longitude 119.0° East,” said the ministry in a statement on Sunday. ANN