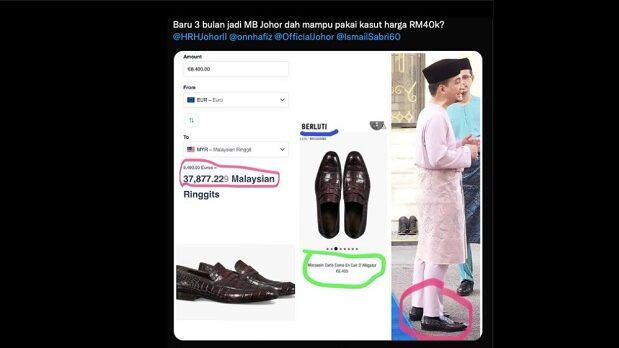 The Centre to Combat Corruption and Cronyism (C4) yesterday called on Johor Menteri Besar Onn Hafiz Ghazi to auction off the pair of shoes he received from Johor’s Sultan Ibrahim Sultan Iskandar and use the proceeds to help the public.

This comes after Onn Hafiz’s admission that he did not buy the shoes, which came under public scrutiny recently, but that he received them from the ruler as a gift.

C4 executive director Cynthia Gabriel said gift-giving enables corruption, especially when there is no asset declaration law in the state.

“As such, (an) asset declaration law is crucial to drive transparency and accountability into governance and drive out any suspicion of quid pro quo (where) ‘I scratch your back and you scratch mine’, and where loyalty is bought through inappropriate gifts and rewards… what more from the royalty,” she said.

Cynthia said any individual who is in a position of power must exercise “the highest levels” of integrity and diligence in rejecting such rewards and gifts given to them.

Thus, she added, C4 calls upon the Johor Legislative Assembly to enact a law that requires all its members to declare their assets.

“Secondly, we also urge the menteri besar to get the shoes off his rack and use the money to help the rakyat being punished every day with rising prices of goods.”

Onn Hafiz came under the spotlight recently after an internet user uploaded a photo showing the menteri besar wearing a pair of shoes, which was claimed to be worth tens of thousands of ringgit.

Following this, the Machap state assemblyperson reportedly posted on Facebook yesterday denying he purchased the footwear and revealed that the shoes were a gift from Sultan Ibrahim (above, right).

Onn Hafiz added that it was nothing new as the sultan had also given such gifts to members of previous state administrations to motivate them.

Meanwhile, in a similar tone, Pasir Gudang MP Hassan Abdul Karim said Onn Hafiz should have practised restraint and instead advised the ruler that, as he is a menteri besar, he was not supposed to accept gifts.

While there seems to be nothing wrong with a sultan giving a gift to anyone in his state, Hassan said, the concept of separation of powers should be exercised.

“A sultan holds the role of being a state ruler, while a menteri besar’s role is to represent the people.

“There should be a separation of powers. Because the royalty today are also involved in business.

“I do not mean to create any misunderstanding, but towards building a government that exercises integrity, there must be some restraint,” Hassan told Malaysiakini.

He stressed that while the sultan may mean well in giving the gift, the menteri besar must understand the law and the need to maintain a clean image for his government and himself.

He said there is a Malay saying that advises against “termakan budi” (feeling indebted to others), which may make it difficult for the menteri besar to exercise his duties in the future.

On a broader picture, Hassan said the culture of giving gifts to MPs and state assemblypersons should be stopped altogether, including when they fulfil invitations to events.

“There is no need to give gifts to MPs. You might start with giving a fruit basket, but then what’s next? Some commission?

“The MPs and state assemblypersons are already paid well. No need to give them anything. We need to educate our MBs to do their job without expecting anything in return,” he said.

Political economist Edmund Terence Gomez when contacted yesterday said the issue of a sultan giving a menteri besar a gift is something new and should be discussed.

A former member of MACC’s Consultation and Corruption Prevention Panel, Gomez said the issue has raised several questions, including the need for a sultan to give a head of state such an expensive gift.

“On the issue of a sultan giving an MB a ‘gift’, this is new, raising also the question why the need to do so.

“We need to discuss this as there are business-related issues involved.

“What is also in question is the value of the gift. The giving of such expensive gifts raises questions,” Gomez added.