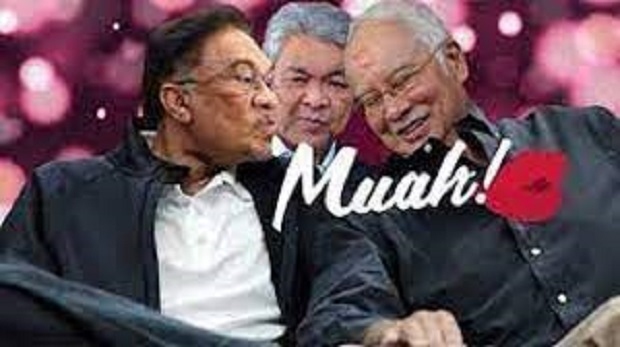 Would Anwar step down if it encourages voter enthusiasm?

“All are implicated in abuse of power and corruption.”

Before I begin, people should really check out Zan Azlee’s latest piece about the film Mat Kilau.

His piece is subversive if you really think about it, and I like subversive. Back to the business at hand.

Well, yes, at least Anwar Ibrahim got that right. All are implicated in the abuse of power and corruption.

Every politician, with the exception of a few outlier souls, is complicit in a system of racial and religious privilege that has created a political class that believes people should eat less eggs.

Anwar says that voters, and I suppose he means Pakatan Harapan voters, should not be cynical – otherwise the future will be decided by those who are corrupt.

What he fails to mention is that those corrupt individuals will be voted in by people who do not think that corruption warrants much attention in the larger religious and racial scheme of things.

Think of all the money wasted over the years and is still being wasted on policies and departments which encourage that sort of thinking.

Was there any move by Harapan to change this?

Remember the good old days when an RM810 million budget for Jakim was justified?

“Although the state governments are supposed to do this, they do not have the capacity to bear the costs, so we had to top up,” said then religious affairs minister Mujahid Yusof Rawa.

We are dealing with two kinds of voting bases here, the first that would vote in race-based parties and the second which has no real commitment to any kind of equality beyond mouthing the word “meritocracy” as if it is some kind of totem against a corrupt system in which all have benefited from in some way.

Those who believe that a Malay uber alles government is the shape of things to come have an array of choices of race-based parties to choose from and they have chipped away at Umno’s base.

This is why Umno/BN wants an election as soon as possible.

Meanwhile, the non-Malays and progressive Malay polity have to contend with a PKR which apparently can’t even hold a clean election; Amanah which finds its religious credentials always challenged because it could not come up with a religious narrative of its own; and the DAP, which has no problem calling everyone else a running dog but displayed the same traits or worse when it was in power.

It is really not about voter fatigue but the realisation across a swath of Harapan voters that change is not in the cards.

Even Anwar’s talk of traitors within Harapan is mendacious.

The fact is that Harapan officials were telling us that there was nothing to see in the lead-up to the Sheraton Move and that the press was making things up.

And to blame the lack of reforms on this is pure gas lighting.

They are reforms that could be carried out, barring certain procedures and other legislative arcana, almost immediately, if people were committed and willing to make those changes.

You know, some folks say that things will never change in this country.

They are probably right. But just imagine if we had a coalition that was an alternative to BN politics, not a substitute.

The fact is that the economic vagaries of the world are affecting Malaysia, but the problem here is that a group of incompetent race and religious obsessed meat heads are running the show which makes it worse.

I wish Harapan leaders were deathly afraid of their supporters, like how the GOP (Republican Party) in the US is afraid of its supporters.

Imagine the possibilities if Harapan actually had to fulfil their mandate, if not the base would not turn out to vote for them.

Hey, if the country is going to hell in a handbasket, we may as well enjoy the ride, right?

Have you noticed that it is only Harapan supporters who want people to tell them the solutions to problems whenever Harapan hacks are criticised?

The Malay uber alles voting base knows exactly what they want. People who vote for Umno and BN know exactly the kind of compromises they are willing to put up with.

With the economy the way it is, Harapan should be winning this by a mile.

Add to this, the Malay uber alles government is operating like drunken teenagers behind the wheel, Harapan should be the clear choice for any voter.

And yet Harapan has suffered in by-elections and state elections even though they are supposed to be the rational choice.

For some reason, the Harapan base and swing voters have no desire to get off their behinds and send a message to Umno/BN/PN.

Also, the big tent is still in play, and PKR’s head honcho seems to think the recent revelations by Pasir Salak MP Tajuddin Abdul Rahman do him some favour because Anwar gets the opportunity to say his strong and formidable numbers fell through because he would not meddle in the court cases.

I have no idea what would encourage voter turnout among the Harapan base – but the big question is that if voter enthusiasm would be encouraged by Anwar’s departure from the political battlefield, would he exit gracefully?