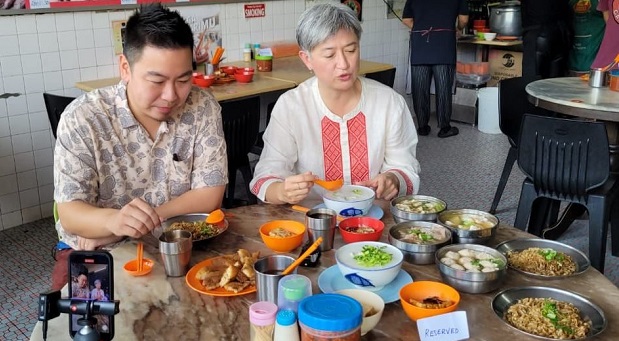 She was seen digging into her favourite congee, soup noodle, fish ball soup and Chinese tea with her brother James Wong, who is an architect in Sabah.

Penny told reporters that the restaurant brought nostalgic memories of her years as a child in Sabah with her father Datuk Francis Wong who took her and her siblings to the restaurant often.

Francis is currently in Australia.

Wong, who was born in Kota Kinabalu where she spent her early years before moving to Australia at eight years old, is currently on her first official visit here.

As part of her three-day working visit to Malaysia, Wong had a networking brunch with government, business and civil society leaders on Wednesday (June 29), where she paid homage to her paternal grandmother for being her source of strength during hard times. ANN

Wong cited memories of Tanjung Aru beach, Mamutik islank, Mount Kinabalu, the iconic Tamparuli bridge, and the cool rivers of in the highlands of Tambunan. She also recounted intimate memories closer to her former home here, of her father buying fresh fish and prawns, and her beloved grandmother’s mushroom chicken.

Wong said this visit was an ode to the memories that were a big part of her.

“I made this trip to balik kampung. It is an act of homecoming but also more. This trip is to pay respect to my nation of birth and the nation to which I belong.

“Coming here is a story that can strengthen the relations between our nations,” she said during a welcome reception with Sabahan community leaders, friends, and family here.

The Sabah-born Australian minister said her story is like that of many Sabahans and Australians, connecting her to the migrant population in Australia.

“When you walk down the streets in an Australian city, you see half of us here today,” she said referring to its diversity and origins.

“This is modern Australia, this is today’s diverse Australia, it is an Australia that understands that our prosperity, our security and our future is shared with yours,” Wong concluded.

She said she hoped her story could strengthen relations between the two countries as she begins her tour of countries in her stint across several continents.

Wong’s background story has been well told; she grew up to a Malaysian father and Australian mother in Sabah and migrated when her parents’ marriage broke apart.

Wong often pays tribute to her background growing up in Kota Kinabalu and how it formulated her identity.

“My childhood and memories here enables me to be who I am. It allows me to be foreign minister – and it is an act of respect to my Po Po,” she said, referring to her grandmother Fung Lai Shim.

Wong is here till tomorrow, slotting in a visit to a local noodle shop, her former international school, and a walkabout with local Opposition lawmaker Ginger Phoong. MALAY MAIL