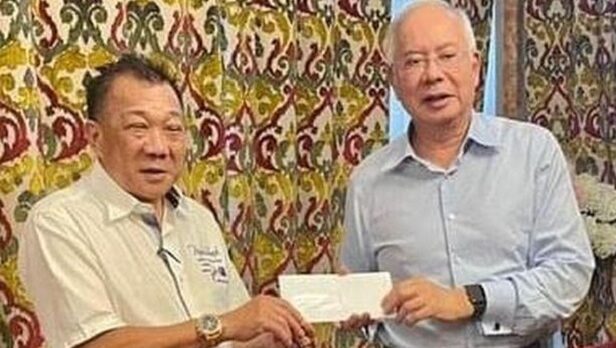 Top leaders to speak at Sabah Barisan convention in Penampang

Bung Moktar handing over an invitation letter to Najib to attend the Sabah Barisan convention in Kuala Lumpur recently.

Bung added that about 5,000 people are expected to attend the convention which is to be held at the International Technology & Commercial Centre (ITCC) Grand Ballroom.

He said this could be the last big gathering by Barisan parties before the 15th General Election.

“Hence, Barisan members – particularly participants in the convention – must use the meeting to discuss relevant issues in order to empower the coalition’s struggles,” he said, in a statement here on Wednesday (June 29).

He added that members of Barisan parties must look carefully at the coalition’s plan in preparing for the coming general polls.

Bung, who is also Sabah Umno chief, also urged Barisan members to strengthen the solidarity between the component parties ahead of the election.

The Deputy Chief Minister added that Barisan contributed significantly to the formation of the Gabungan Rakyat Sabah-Barisan state government following the snap state election in 2020.

“As we have only four parties within Sabah Barisan, we need each other in order to continue supporting the current government,” said Bung

“We need to solidify relations between the Barisan leadership so that we can unite our machinery at all levels before we go into the election which can be called at any time,” he added.

Bung added that it is important that Barisan continued to be close to the people‘s hearts so it will be seen as the brand that prioritises their interests and the country’s wellbeing.

A host of programmes have been lined up for the convention such as a political and economic forum featuring panel members like former chief minister Datuk Seri Salleh Said Keruak and Umno Supreme Council member Datuk Ahmad Shabery Cheek, among others.

Besides that, Najib is scheduled to speak in his capacity as the Barisan advisory board chairman in a segment called Bicara Seorang Negarawan.

Ahmad Zahid, who is also the Umno president, is expected to close the event later that day.