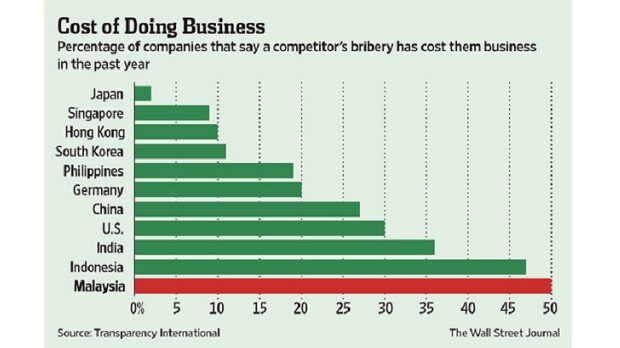 PETALING JAYA: A 2012 Wall Street Journal (WSJ) Bribe Payers Survey, that claimed Malaysia was ranked the most corrupt country in the world, has resurfaced and is making its rounds on social media.

The survey claimed that 50% out of 3,000 executives polled stated that they had lost a contract in the past year because their competitors had paid a bribe.

In a Transparency International (TI) Corruption Perception Index released on Jan 25, Malaysia dropped five spots from 57 to 62 in corruption ranking among 180 countries.

Over the past few years, Malaysia has prosecuted political bigwigs and senior corporate officials in numerous high-profile corruption cases. Yet, the country is still perceived as a corrupt nation. However, an academic and a former TI-Malaysia president said this was not the true picture. 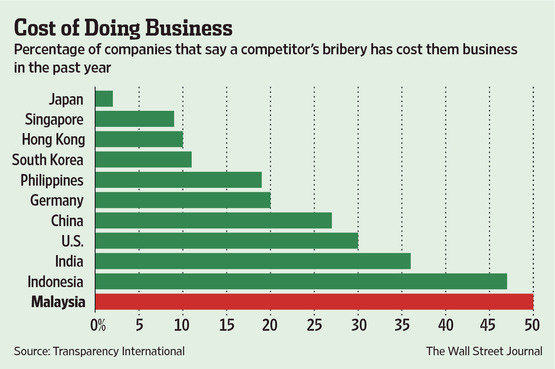 Nusantara Academy for Strategic Research senior fellow Prof Azmi Hassan said one of the issues foreign investors look for before investing in a country is its level of corruption. If the level is high, it will put off foreign investors.

“If people just look at ‘perception’ as an indicator of corruption, one must ask which organisation is promoting that perception?

“If a survey skews the questions, then the answers will also be incorrect.

“For anyone to say Malaysia is more corrupt than some of our neighbouring countries, it does not reflect a true and fair view. Corruption in some of these countries is a way of life. People there need to pay to get anything done.

“The public should not believe the WSJ Bribe Payers Survey that is making its rounds on social media. It is skewed and imbalanced.”

Azmi said corruption continues to hit the headlines in Malaysia because of prominent graft cases that have landed in court, and this will colour the views of anyone who is involved in any kind of survey.

“Malaysians don’t face the prospect of having to pay corrupt officials to get things done on a daily basis,” he said.

Azmi added that the government must hold education programmes that will discourage the public from offering or accepting bribes, and that education is the best way to fight corruption.

TI-Malaysia former president Tan Sri Ramon Navaratnam said the idea of corruption is based on perception.

TI’s survey is based on views presented by foreign investors.

“It is hard for foreign investors to give evidence on corruption, so they base their views on their perception of it. The question is, why is there such a perception?

“Perception might imply what the investors think about the country. Malaysia inherited a civil service that has high integrity and a business sector with strong ethics. But over time, the business sector wanted a bigger piece of the pie and this is when money (corruption) came into play.”

He said the disparity that exists today between the rich and the poor has come to be viewed by many in the B40 group as the rich having made their money through corruption.

Ramon said a radical change is needed to fight corruption, and it must come from the leadership itself. Leaders must make it known that they will not tolerate any kind of corruption.

He added that stern action must be taken against corrupt officials and they must be made examples of what will happen to offenders.

Ramon also said corruption is a disease, which must be dealt with harshly, or the nation will lose foreign investors who will feel the “cost of doing business in other countries is cheaper than in Malaysia”. THE SUN DAILY

Despite Malaysia’s high-profile anticorruption crusade, half of the corporate executives surveyed by a global corruption watchdog believe that competitors have obtained business through bribery, underscoring the hard task ahead for Prime Minister Najib Razak’s government in weeding out graft.

Transparency International said Malaysia scored worst in the 2012 Bribe Payers Survey. It asked about 3,000 executives from 30 countries whether they had lost a contract in the past year because competitors paid a bribe—and in Malaysia, 50% said yes. Second on the dubious honor roll was Mexico, at 48%.

Japan ranked as the world’s least-corrupt place to do business, with just 2% of respondents saying they had lost out due to bribery; Malaysia’s neighbor Singapore was second-cleanest, at 9%. Even Indonesia, with a long-standing reputation for corruption, fared better than more-developed Malaysia: Southeast Asia’s largest economy came in at 47%. By comparison, 27% of respondents in China said they thought bribes had cost them business.

“It shows the attitude of private companies in Malaysia, indicating that bribery in the public sector could be systemic and in a sense institutionalized,” said Paul Low, president of the Malaysian chapter of Transparency International.

Since taking office in 2009, Mr. Najib has pledged to eradicate corruption and regain public confidence. Hundreds of cases have been investigated. The government has established special courts to hear corruption cases and is working to introduce harsher punishment, said Ravindran Devagunam, director of corruption prevention at government think-tank Pemandu. The body reports to the prime minister’s department. – WSJ