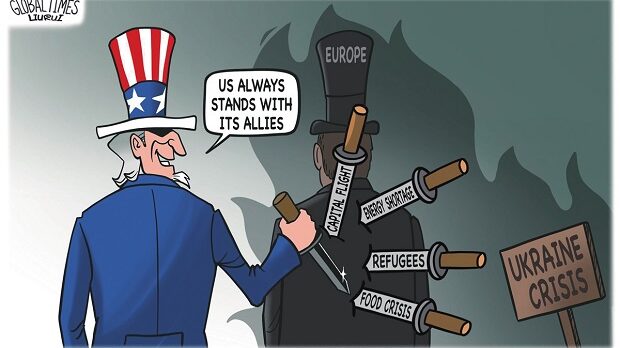 LONDON: Russia’s defence ministry today denied hitting a shopping mall in the Ukrainian city of Kremenchuk with missiles, saying it had struck a weapons depot and a subsequent explosion of ammunition had triggered a fire in the nearby mall.

At least 18 people were killed yesterday in what Kyiv said was a direct Russian missile strike against the busy shopping centre in Kremenchuk. The G7 called the hit a Russian war crime, while Ukrainian President Volodymyr Zelenskyy said it was “one of the most defiant terrorist attacks in European history”, accusing Russia of directly targeting civilians.

Moscow rejected those accounts, saying it had hit a legitimate military target in the city, and that the shopping centre was not in use.

“In Kremenchuk, Russian forces struck a weapons depot storing arms received from the United States and Europe with high-precision air-based weapons. As a result of the precision strike, Western-made weapons and ammunition concentrated in the warehouse… were hit,” Moscow’s defence ministry said in a statement posted on its Telegram channel.

“The detonation of stored ammunition for Western weapons caused a fire in a non-functioning shopping centre located next to the depot.”
Ukraine said the shopping centre was hit directly by Russian missiles and 1,000 people were inside at the time of the strike.
Rescue efforts continued on Tuesday to recover survivors and bodies, with dozens injured and hospitalised.

Ukraine has reported a sharp escalation in Russian attacks in recent days. On Sunday, a residential building in the capital Kyiv was hit in the first attack on the capital since early June.

Alongside the shopping centre, Ukraine said Russian missiles also hit the eastern cities of Kharkiv and Lysychansk on Monday in one of the bloodiest days for civilian casualties in weeks.

Speaking hours after the first casualties were reported from Kremenchuk on Monday, Russia’s deputy ambassador to the United Nations, Dmitry Polyanskiy, accused Ukraine of using the incident to gain sympathy ahead of a June 28-30 summit of the North Atlantic Treaty Organisation military alliance and pointed to “striking discrepancies” in Kyiv’s account of the incident.

Russia has repeatedly denied targeting civilian areas during its four-month offensive against Ukraine. The UN said at least 4,700 civilians have been killed since Russia invaded on Feb 24. – REUTERS