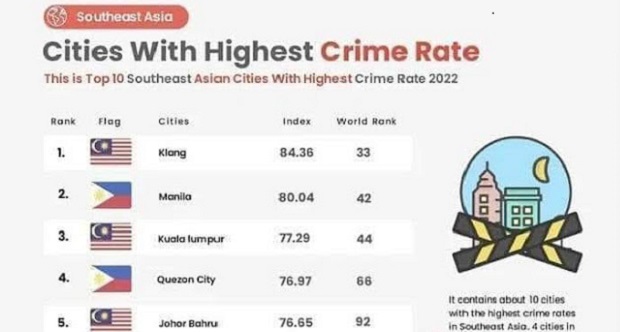 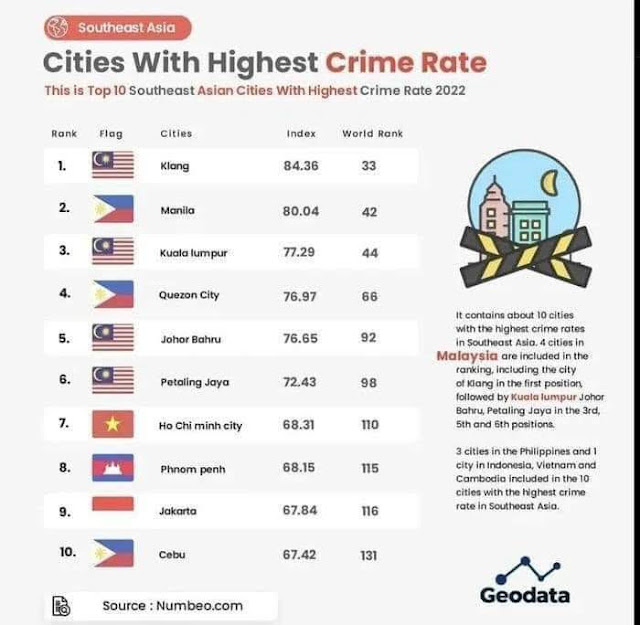 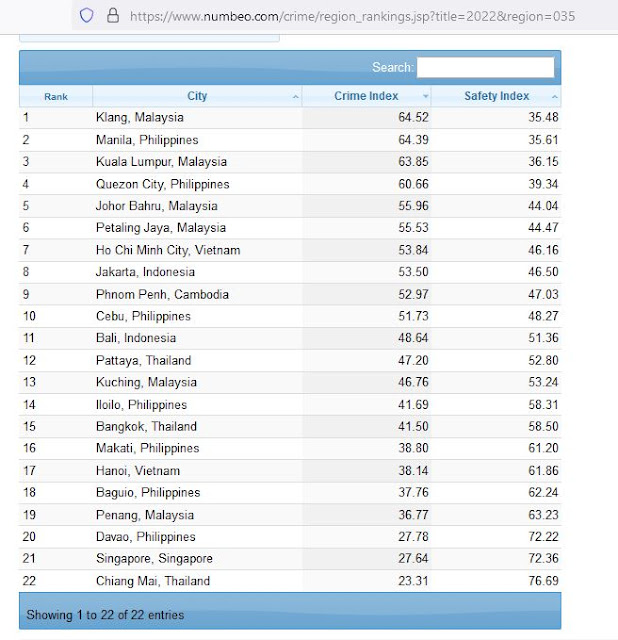 My comments : A friend sent me the above. I dont know who is this outfit numbeo.com but they seem to be Australian.

N’theless this ranking is on the Internet and it is very embarrassing for Malaysia that Klang occupies no. 1 ranking and KL our capital city occupies no. 3 position in crime rate in South East Asia.

The country is really going down the tubes very fast.

There is no solution being offered by any of the political parties. Not BN, PN, PH or whoever else.

They just do not know what to do about anything.

They dont know that the education system is broken down.

These statistics above show that the country’s security system has also broken down.

The country’s agricultural system has been messed up. We have the capacity to be fully self sufficient in food but racial policies prevent the country from being self sufficient even in food security.

They dont even know what colour shirts to wear.

Everything is breaking down. -http://syedsoutsidethebox.blogspot.com/ BLOGGER-cum-veteran journalist Datuk A. Kadir Jasin has taken a subtle swipe at PAS by linking concerns expressed by the state police over a rising trend of sexual crime that encompasses sexual harassment, rape, sodomy and incest.

Nevertheless, between the January and May period this year, a total of 76 cases of sexual crime were reported compared to 84 cases in the same corresponding period last year.

“This is baffling because Kelantan has been under the PAS rule for the longest of time,” he highlighted in his most recent Facebook posting. “Moreover, Darul Naim (Kelantan’s honorific name) means a state full of delights”.

The moral decay in the state – not to mention high divorce rate and family violence – despite being ruled by so-called pious leaders, many of whom being Muslim scholars educated in the Middle East, has raised many eyebrows.

Speaking to reporters back then, Kelantan police chief Datuk Shafien Mamat said initial investigations showed that majority of the suspects were known to the victims. “Our investigations also revealed that some of them are couples but police have to classify the case as alleged rape because the victims were under-aged.”

Majority of the victims were aged between 13 and 16 years old while the police had made several arrests of whom most of them involved teenagers.

While Kelantan Menteri Besar Datuk Ahmad Yakob has attributed the higher number of sexual crimes in the state to drug use, some reaction by netizens to Kadir’s FB posting expressed being puzzled by the high social and moral decadence despite the non-existence of night clubs and discos apart from the state having a low population of non-Muslims/Malays.

“Go to Kelantan if you want to witness how Islam is being embarrassed,” lamented Manan Razali. “At the same time, it is a poor state with weak governance whereby the interest of its leaders are prioritised while the welfare of the populace is a secondary concern.”

Mazlina Ismail opined that Kelantan failed to portray itself as an exemplary Muslim state with smart, affluent and high-minded populace.

“(Its leaders) are ‘low-buys’ (lebai/religious experts) and not trustworthy. Many Kelantanese are scattered all over the peninsular looking for jobs. It’s surprising that the leaders never take any action … only looking after their own pockets.”

Elsewhere, Haris Hussain cynically attributed Kelantan’s high sex crime rate to the DAP while Samsudin Manap cautioned that Malaysia has already been inflicted by the three determining factors of a corrupt nation, namely corrupt leaders, being debt-laden and seeing a depreciation of its currency value. – https://focusmalaysia.my/