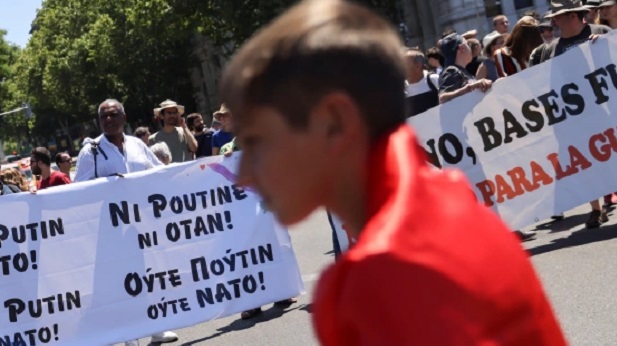 Demonstrators called for US-led NATO to be dissolved and for military bases maintained by the United States in Spain to be closed. Banners with the words “No to NATO, No to War, For Peace” were held as they marched through the city.

The Spanish government banned another rally planned for Wednesday, the first day of the NATO summit, on security grounds.

“Tanks yes, but of beer with tapas,” sang demonstrators, who claimed an increase in defence spending in Europe urged by NATO was a threat to peace.

“I am fed up [with] this business of arms and killing people. The solution they propose is more arms and wars and we always pay for it. So no NATO, no [army] bases, let the Americans go and leave us alone without wars and weapons,” said Concha Hoyos, a retired Madrid resident.

Organisers claimed 5,000 people joined the march, but authorities in Madrid put the number at 2,200. 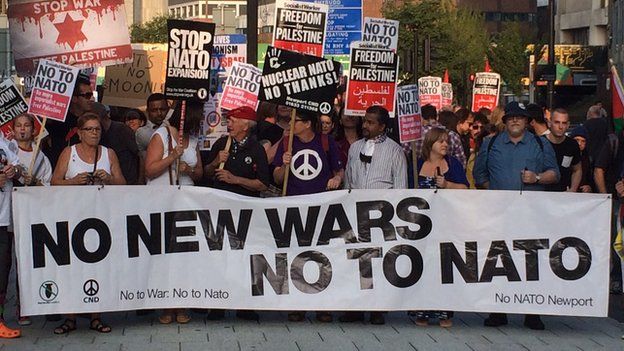 NATO is expected to consider the bid, opposed by alliance member Turkey, for Finland and Sweden to join. The Nordic nations applied in the wake of the Russian assault on Ukraine.

Russian President Vladimir Putin, who calls the war a special military operation, says it in part responds to the accession to NATO of other countries near post-Soviet Russia’s borders since the 1990s.

Madrid is set to be turned into a virtual fortress during the two-day summit. More than 10,000 police and other security forces will provide protection to the representatives of some 40 countries attending. An interior ministry spokesman said to date no specific threat has been identified.

The summit is being held in the shadow of the war in Ukraine and is expected to take decisions on strengthening NATO’s military and deterrence capacities.

Johnson made the quip while gathered around a table with U.S. President Joe Biden, Canadian Prime Minister Justin Trudeau, European Commission President Ursula von der Leyen, and others. The leaders are meeting for the G7 summit in Bavaria throughout this week.

“Jackets on? Jackets off? Shall we take our clothes off?” Johnson said, referencing the reportedly intense temperature of the room.

Trudeau suggested they keep the jackets on long enough to take pictures.

“We have to show that we’re tougher than Putin,” Johnson quipped.

Johnson ribbed, “We’ve got to show them our pecs,” while Von der Leyen interjected, “Horseback riding is the best.”

Biden did not weigh in on the jokes.

Russian President Vladimir Putin rides a horse during his vacation outside the town of Kyzyl in Southern Siberia on Aug. 3, 2009. (Alexey Druzhinin/AFP via Getty Images)

In public photos, Putin has long sought to portray himself as a skilled athlete and outdoorsman.

The exchange came hours after the Biden administration accused Russia of using torture and electrocution in its invasion of Ukraine on Sunday. Biden has repeatedly called for Putin to face a war crimes trial.

A White House statement marked the International Day in Support of Victims of Torture.

“Any instance of torture is one too many, and yet every year countless victims suffer this brutal violation of their human rights and dignity,” Biden wrote. “This year we have been shocked by the horrific acts committed by Russian forces in Ukraine, including multiple, credible reports of torture such as beatings, electric shocks, and mock executions.”

“In Mali and Burkina Faso, terrorist groups have been documented to have massacred and tortured local populations, while in Mali and Central African Republic, Kremlin-aligned Wagner mercenaries have reportedly employed similar cruel and unlawful tactics,” he added.