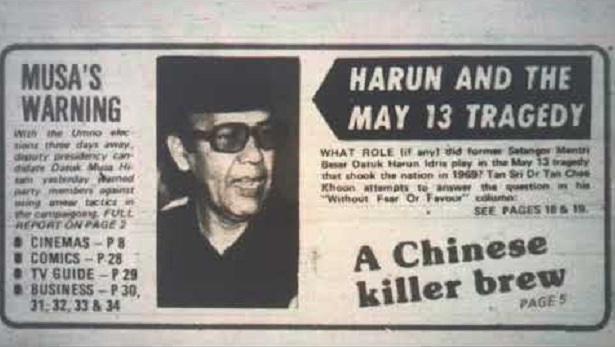 In the first two decades following Malaysia’s independence, most of the politicians who were arrested were from the opposition Socialist Front due to political motives as Umno gradually extended its iron grip on power.

However, the most prominent figure to be jailed was none other than the former Selangor menteri besar, Harun Idris (1925-2003), who was sentenced to six years imprisonment on corruption charges in 1977.

Harun’s name had already been tarred by association with the May 1969 racial riots which started in his housing area and he was also implicated in two separate charges of misusing funds that cemented his place as a notorious political leader.

Despite this, his grandson Ashaari Azman Shah has been on a quest to try and establish a re-evaluation of Harun’s reputation.

He has spoken to many prominent figures of the era who knew Harun during his time as Selangor MB and also as a leading sporting figure.

While the testimony of these dignitaries does shed more light on Harun’s complex personality, it must be said that no compelling evidence emerges to clear his name, which Ashaari reveals was the late Harun’s final wish.

According to Ashaari, who is a medical doctor, his late grandfather kept a set of diaries that he wrote from 1977-1981 covering the climax of his corruption trials and his time served in Pudu Prison.

“In it, he wrote that he hopes one day his descendants would act to clear his name.

“I’m not sure if that will be possible but I can only try and trust in God and His wisdom,” Ashaari told Malaysiakini in an interview.

He believes that some truths about his grandfather have been suppressed.

“If you speak to people who knew him well they mainly have good things to say about him. One particular quote I like was that he was ‘too far sighted’.

“He was highly intelligent, a visionary, very competent administrator but also extremely warm, kind and approachable.

“He may not have left tall skyscrapers that loom large over Kuala Lumpur but I think his legacy is captured perfectly by PKNS, which helped develop affordable housing (still does so till today), and Yayasan Selangor, which presently accounts for 20,000 alumni.

“Through PKNS, Shah Alam was developed alongside green belting of a number of areas, many of which have sadly been developed after he was deposed as MB and therefore affecting things like flooding in KL and Selangor now,” said Ashaari.

He said that Harun was widely regarded as the most influential Umno Youth leader who would often be very critical of government policies back in the day and he was even called out for creating “a party within a party”.

“If you add that to the fact that he was Malaysia and Selangor’s best-ever football manager, also involved in cycling, golf and brought Muhammad Ali to fight in KL in 1975, then it makes him at least a compelling figure in Malaysian history.

“Sadly, much of his story has been lost. My personal opinion is that it was intentionally suppressed due to internal Umno politics between Harun and (second prime minister) Abdul Razak (Hussein),” he claimed.

Ashaari noted that many of the good things Harun did have been brushed off.

“Just look at his Olympic football team of 1972, which seems to be ignored, while instead, they made a movie ‘Ola Bola’ about the 1980 team which didn’t even go to the Olympics,” he said.

Ashaari is the son of Harun’s youngest son, Azman Shah Harun, and trained as a medical doctor in rural Malaysia. He pointed out that he himself is half-Chinese.

“I did my housemanship in Hospital Ampang from 2014-2016, then was posted to Klinik Kesihatan Kemayan in Bera, Pahang, where I was the medical officer in charge there for about 1.5 years.

“I was then transferred to KK Tg Karang (by coincidence there is an SMK Dato Harun opposite) but then decided to apply to work and train in England,” he explained.

He is currently in training to be a family medicine specialist and is on a Public Health rotation working on projects related to non-communicable diseases and public mental health.

Nonetheless, Ashaari remains a keen student of history and has undertaken more than 30 interviews in the course of his research.

Among those he spoke to were former prime minister Dr Mahathir Mohamad, former deputy prime minister Musa Hitam, ex-IGP Hanif Omar and others such as Daim Zainuddin and Lim Kit Siang.

He also talked to veterans in the legal field, such as VC George, Mahadev Shankar and Gopal Sri Ram, journalists like R Nadeswaran and footballers Soh Chin Aun and Santokh Singh to build up a better picture of Harun.

Many of the dignitaries did speak highly of Harun’s positive side, but despite these efforts, it’s very hard to run away from the black marks of May 13 and the twin corruption cases.

“On May 13th – there is no doubt at all that the Malays gathered at his official MB residence and there were a significant number of them that came armed.

“Whether he was the instigator or ‘tip of the spear’ is another question. For me, I don’t think it would be in keeping with his multi-racial character as his peers tell me that most of his friends growing up were actually non-Malay and I would argue that you have to be of a certain personality to commit such a deeply violent act,” said Ashaari.

The results of the 1969 election had taken the Umno/Alliance by surprise and Selangor was one of the states in the balance.

Following a victory parade by the opposition, which then included Gerakan as well as DAP, Umno’s retaliation was the trigger for widespread violence and murder.

“There is a variety of views which exonerate him from May 13th,” claimed Ashaari.

“One is a recent interview I did with Hanif, there is also an article written by then opposition leader Tan Chee Khoon in The Star newspaper called ‘Datuk Harun and the May 13th tragedy’ and also (former deputy prime minister) Dr Ismail (Abdul Rahman) who originally wanted to have him charged for murder, and in the end, changed his mind,” he said.

Ashaari also claimed that two ministers who headed the National Operations Council that followed the suspension of Parliament were convinced of Harun’s guilt, but in the end, couldn’t pin the blame on him based on evidence.

“I also wrote to Mahathir to ask him if he, Razak and my grandfather engineered May 13th to replace Tunku as the PM – he replied in the negative.

I agree with Lim that perhaps there should be a Royal Commission of Inquiry – or at least declassify the documents to do with the riots – as suggested by Kua Kia Soong. Let people look at all the evidence and decide. It’s hard to be sure of any version of events with so much ambiguity and uncertainty,” he added.

Between 1975 and 1977, Harun was found guilty of various charges of corruption, including forging minutes of a meeting for the purpose of cheating the bank by pledging its stocks to the First National City Bank (now Citibank) to get letters of credit for Tinju Dunia Sdn Bhd to stage the Muhammad Ali vs Joe Bugner fight.

This action caused Bank Rakyat to lose RM7.9 million and Harun was sentenced to six years’ imprisonment, although he received a pardon from the Yang di-Pertuan Agong after serving three years of his sentence.

There was also the Hong Kong Shanghai bank case for which he was convicted for accepting a bribe of RM250,000 to facilitate the acquisition of a piece of land.

“Regarding the Bank Rakyat case and Hong Kong Shanghai Bank cases… certainly I share my grandfather’s view in his diaries that it was politically motivated. A view also shared by Mahathir as he wrote in his memoirs that he went to see Hussein Onn about it – remarking that ‘the truth was it was purely political’.

“With regard to the mechanics of the case, the details of why guilty verdicts were bad were explained to me by Suhaimi Kamaruddin and Sri Ram, who were on his defence team helping out RR Chelliah.

“My grandfather himself was formerly DPP and state legal advisor before entering politics and therefore had a good grasp of the law,” said Ashaari who added that his grandfather’s confidence in the court’s independence was shaken.

Kind words but no evidence

One of Ashaari’s key refutations is that many had kind words to say about Harun.

Hanif, for example, told him: “Harun had a very good reputation as Selangor MB. He was the people’s man and easy-going – no airs about him. He mixed very well with all communities and was helpful and attentive to their problems.

“He had built up the Selangor and national football teams into formidable and multi-racial ones – and this was in the days when Malaysians were football crazy.

“He was a favourite manager with the players, to many of whom he had allocated special and endearing nicknames, like ‘towkay’ for Soh, the capable captain and ‘spider-man’ for R Arumugam, the almost invincible goal-keeper,” Hanif told Ashaari.

“The Ali–Bugner fight in 1975 in Kuala Lumpur was also rumoured to assist in the building up of Harun’s war chest. Unfortunately, the sponsorship of the fight involved Bank Rakyat, which lost several million ringgit in the venture.

“There were of course rumours of corruption and demands for an investigation. These demands were also made again and again by the opposition in Parliament and they set the anti-corruption agency moving.

“Razak tried to save Harun by recommending him to accept a posting to the UN. At first, he agreed, then asked for time to do an umrah. On his return, I was told (that) Harun’s relatives and political aides strongly advised him against accepting the UN appointment which they were sure would end his political career.

“As a result, Harun went to see Razak again to tell him he was not leaving the country to which Razak sadly said that he would have no option but to let the action run its course,” Hanif reportedly said.

Such words, while offering a distinct insight into Harun’s personality, do not really seem to clear him of any wrongdoing.

Ashaari does not intend to stop with videos, podcasts and interviews on the matter.

“I have started writing a book and I pray I am able to do justice to his story. Perhaps even a movie about the standoff at his house between Umno Youth and the police before he surrendered himself to the authorities in 1978.

“I hope that my book will be able to show that my grandfather did have that multiracial vision, just listen to what his football players had to say about him (Malaysians from all races).

“Malaysia has never had a problem with battling about ideas, the problem has always been implementing them,” said Ashaari who is generally interested in local and world history but has given most of his spare time in recent years to this project.

He added that, as a young Malaysian, he finds the current political situation very confusing – like having to choose between nasi lemak basi or soggy roti canai.