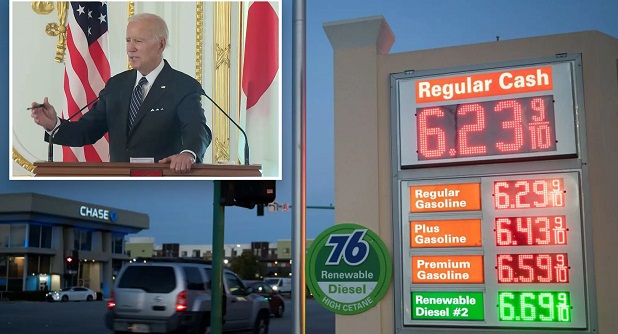 Is It Too Late To Invest In The Oil Price Rally?

The oil market is currently going through one of the most turbulent periods since the infamous March 2020 collapse, as investors continue to grapple with recessionary fears. Oil prices have continued sliding in the wake of the central bank deciding to hike the interest rate by a record-high 75 basis points, with WTI futures for July settlement were quoted at $104.48/barrel on Wednesday’s intraday session, down 4.8% on the day and 8.8% below last week’s peak.

Meanwhile, Brent crude futures for August settlement were trading 4% lower in Wednesday’s session at $110.10/barrel, a good 9.4% below last week’s peak. While crude prices have taken a big hit, oil and gas stocks have fared even worse, with energy equities experiencing nearly double the selling pressure compared to WTI crude.

“Year to date, Energy is the sole sector in the green … but concern now is that fact that Bears are coming after winners, thus they may take Energy down. The Energy Sector undercut its rising 50 DMA and now looks lower to the rising 200 DMA, which is currently -9% below last Friday’s close. Crude Oil is sitting on its rising 50 DMA and has a stronger technical pattern,” MKM Chief Market Technician J.C. O’Hara has written in a note to clients.

“Normally we like to buy pullbacks within uptrends. Our concern at this point in the Bear market cycle is that leadership stocks are often the last domino to fall, and thus profit taking is the greater motivation. The fight-or-flight mentality currently favors flight, so we would rather downsize our positioning in Energy stocks and harvest some of the outsized gains achieved following the March 2020 COVID low,” he has added.

According to O’Hara’s chart analysis, these energy stocks have the greatest downside risk:

Whereas the bear camp, including the likes of  O’Hara, believes that the oil price rally is over, the bulls have stood their ground and view the latest selloff as a temporary blip.

In a recent interview, Michael O’Brien, Head of Core Canadian Equities at TD Asset Management, told TD Wealth’s Kim Parlee that the oil supply/demand fundamentals remain rock solid thanks in large part to years of underinvestment both by private producers and NOCs.

You can blame ESG—as well as expectations for a lower-for-longer oil price environment over the past couple of years—for taking a toll on the capital spending of exploration and production (E&P) companies. Indeed, actual and announced capex cuts have fallen below the minimum required levels to offset depletion, let alone meet any expected growth. Oil and gas spending fell off a cliff from its peak in 2014, with global spending by exploration and production (E&P) firms hitting a nadir in 2020 to a 13-year low of just $450 billion.

Even with higher oil prices, energy companies are only increasing capital spending gradually with the majority preferring to return excess cash to shareholders in the form of dividends and share buybacks. Others like BP Plc. (NYSE:BP) and Shell Plc. (NYSE:SHEL) have already committed to long-term production cuts and will struggle to reverse their trajectories.

Norway-based energy consultancy Rystad Energy has warned that Big Oil could see its proven reserves run out in less than 15 years, thanks to produced volumes not being fully replaced with new discoveries.

According to Rystad, proven oil and gas reserves by the so-called Big Oil companies namely ExxonMobil (NYSE:XOM), BP Plc., Shell, Chevron (NYSE:CVX), TotalEnergies ( NYSE:TTE), and Eni S.p.A (NYSE:E) are all falling, as produced volumes are not being fully replaced with new discoveries. 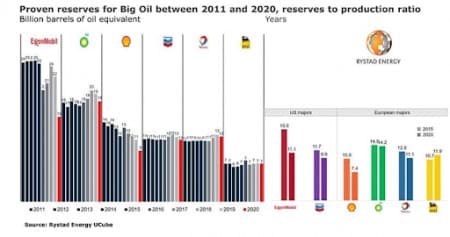 Massive impairment charges has seen Big Oil’s proven reserves drop by 13 billion boe, good for ~15% of its stock levels in the ground. Rystad now says that the remaining reserves are set to run out in less than 15 years, unless Big Oil makes more commercial discoveries quickly.

Global oil and gas companies cut their capex by a staggering 34% in 2020 in response to shrinking demand and investors growing wary of persistently poor returns by the sector.

ExxonMobil, whose proven reserves shrank by 7 billion boe in 2020, or 30%, from 2019 levels, was the worst hit after major reductions in Canadian oil sands and U.S. shale gas properties.

The result? The U.S. shale industry has only managed to bump up 2022 crude output by just 800,000 b/d, while OPEC has consistently struggled to meet its targets. In fact, the situation has become so bad for the 13 countries that make up the cartel that OPEC+ produced 2.695 million barrels per day below its crude oil targets in the month of May.

Exxon CEO Darren Woods has predicted that the crude markets will remain tight for up to five years, with time needed for firms to “catch up” on the investments needed to ensure supply can meet demand.

“Supplies will remain tight and continue supporting high oil prices. The norm for ICE Brent is still around the $120/bbl mark,” PVM analyst Stephen Brennock has told Reuters after the latest crude selloff.

In other words, the oil price rally might be far from over, and the latest correction might offer fresh entry points for investors.

Credit Suisse energy analyst Manav Gupta has weighed in on the stocks with the most exposure to oil and gas prices. You can find them here.

Meanwhile, you can find some of the cheapest oil and gas stocks here.

OIL prices fell yesterday on worries over weakening demand in the slowing global economy as Federal Reserve Chief Jerome Powell acknowledged interest rate hikes could lead to a recession.
US stocks had a choppy session, pushing into positive territory for a time after Powell reiterated the need to counter soaring inflation, but cautioned that a recession was “certainly a possibility” amid the ongoing interest rate hikes.

But New York shares retreated again at the end of the day, though they ended with smaller losses than major European and Asian bourses.

The S&P 500 finished just 0.1% lower, meaning it maintained most of the gains from Tuesday’s heady session.

“The stock market had ample reasons to sell aggressively into yesterday’s strength, but it didn’t,” Briefing.com said. “That resilience fostered a sense that the existing growth concerns have been adequately prices into the market for now.”

In his opening remarks, Powell insisted the US economy “is very strong and well positioned to handle tighter monetary policy.”

“Inflation has obviously surprised to the upside over the past year, and further surprises could be in store,” the Fed chief said in his semi-annual appearance before Congress.

Policymakers “will need to be nimble” given that the economy “often evolves in unexpected ways,” he said.

Oil prices were feeling the heat from recessionary fears, with both main contracts tanking more than 6% at one point.

“Concerns about a global slowdown appear to be outweighing any concern over supply issues derived from Russia’s invasion of Ukraine, and the prospect that Chinese demand could return,” said market analyst Michael Hewson at CMC Markets.

US President Biden asked Congress to suspend the federal gas tax for three months as price increases at the pump – in large part spurred by fallout from President Vladimir Putin’s invasion of Ukraine and subsequent Western sanctions on Russia – have fueled rising inflation.

In a televised address, Biden called for a pause in the federal tax on gasoline of 18 cents a gallon until September. He also asked state governments to suspend their own taxes for the same period.

But the proposal got a lukewarm reception on Capitol Hill, where critics said the measure would hit key highway trust funds and said that it might not lead to much relief at the pump.

US gasoline prices are still very high, but a bit off their record, with the national average easing to US$4.955 (RM21.84) a gallon, according to the American Automobile Association, about six cents below the level a week ago and below the record of US$5.016 hit June 14.