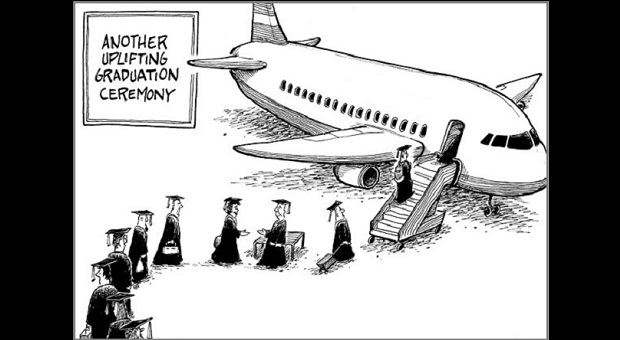 On social media, some of the acerbic responses to the column included suggestions that I should start by leaving right away. Some chided me for constantly using Singapore as an example. To be fair, many people also echoed the views I shared and supported my many ‘ifs’ in the article.

But here is a telling observation.

If you look at the comments posted, they were awfully polarising. Those who criticised my views came generally from the majority community in our nation. And, those who supported my sentiments were by and large from the minority communities in Malaysia.

My question was for all Malaysians to think about the state of our nation. But again, like so many incidents in our blessed country, every discussion gets tainted by racial insecurities.

In Malaysia, crucial debates get pigeon-holed as racially sensitive or taboo involving religion.

If a non-Malay raises a race-related issue for discussion, there’ll be tremendous nastiness with calls for the person to ‘balik India’ or ‘balik Cina’ or ‘balik wherever’. If a Malay person offers an ‘unsuitable’ opinion, they will be accused of being too liberal and be labelled a traitor to their race and religion.

Why does every discussion provoke such narrow-minded reactions? Why is the narrative permanently ‘this is too sensitive an issue’? Are we all just ‘snowflakes’ in Malaysia, and every sticky issue must be swept under the carpet?

If Malaysian citizens are not allowed to question certain injustices or skewed practices, where is the democracy we claim to live in? Are we really so damned insecure that we reduce everything to race and religion?

A few days ago, the latest Sijil Pelajaran Malaysia (SPM) results came out. Our ministry of education gleefully announced that a whopping 9,696 candidates scored straight A’s. Well, if we examine the statistics, this figure has been rising year on year, in recent times.

So, if an outsider looks at these figures, they will get the impression that our country is filled with the brightest minds in the region. However, as an employer and a consultant in the human resource field in Malaysia, I can categorically confirm that this pattern of exam results do not reflect itself in the local job market.

Employers are regularly presented with terribly poor candidates who are graduates of local universities. Their lack of skills, their limited knowledge, and the absence of the ability to learn, is shocking.

So, what’s the point of jubilant celebrations of public examination results, when ultimately, we produce unemployable graduates?

Earlier this year, it was reported that around 400 to 500 PhD scholars were graduating from each of our local universities. When the huge figure and the quality of these graduates were questioned, the National Council of Professors (MPN) retorted with this: If the Massachusetts Institute of Technology (MIT) produced 563 graduates and the National University of Singapore (NUS), 557 in a year, why would Malaysians question the ability of our universities to produce the same number?

Someone needs to inform the MPN that in the QS World University Rankings 2021, MIT is ranked No. 1 and NUS is at No. 11.

On the other hand, Universiti Putra Malaysia (UPM), whose PhD programme triggered this national debate is ranked 132 in the same scale. So, this reply by MPN is just ludicrous, isn’t it?

In our country, all the excitement centres around the quantity of straight A students or the number of PhD scholars we churn out each year. But nobody seems to give two hoots about the quality of people we confer these qualifications to.

No one likes to talk openly, but it is widely acknowledged that the quality of teaching in our schools and universities is quite brutal. Many parents I meet work extra-long hours, take on multiple jobs, re-mortgage their homes, or secure personal loans, just to send their kids to private schools or to overseas universities.

If our education system is as good as the government claims, why will they go to such troubling lengths to send their kids elsewhere?

Each year, we also see top performers at public exams not being offered scholarships that would nurture them. And nearly always, it is because of racially tainted policies by the government.

Instead, the mediocre are rewarded with plum scholarships, and when they come back, they’ll be given cushy government jobs. As a consequence, the Malaysian public ends up with shoddy government services and incompetent leaders. Just listen to some of our ministers speak. You will see their education, or rather the lack of it, come through clearly.

Once again, what I argue here will be deemed a ‘sensitive’ topic, because I’m discussing the tacit institutional racism that our government maintains and promotes.

I am sure, there’ll be some comments to this article on social media that will ‘invite’ me to leave my motherland and go elsewhere, if I don’t like the way things are done here.

They may perhaps suggest that I ‘balik India’ even though I am a fourth generation Malaysian. And, maybe that’s where the brightest Malaysian minds are. Elsewhere, just not here.