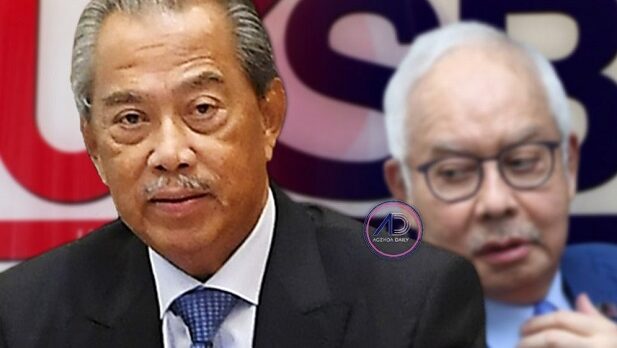 Best you mind your own problems first, says Muhyiddin to Najib

“He’s not a judge. It’s best that he manages his own problem.

“I have finished issuing my statement and I do not want to add further in this function today,” said Muhyiddin during a press conference in Kuala Lumpur after a function hosted by the Malaysian Future Institute.

“I mentioned one or two dates mentioned by the (other) party who supposedly gave the bribes.

“I said I was not here during the dates. So I ask for the matter to not be discussed further,” he said.

Muhyiddin, who maintained his denial over allegations of bribery, said this when asked to confirm specific dates on which he was abroad to receive cancer treatment.

In his testimony, Tan had identified Muhyiddin as the “TSM” that was mentioned in UKSB’s ledger.

The Pagoh MP in his initial denial did not mention specific dates, only saying he had undergone surgery in July 2018 so it would be “impossible” to receive a bribe from anyone.

Taking to Facebook, Najib had questioned Muhyiddin’s denial, pointing out that the Pagoh MP had yet to undergo surgery on July 4, 2018, and was back on duty by Aug 14.

Muhyiddin further said he has yet to be contacted by investigating authorities in relation to reports lodged following Tan’s testimony that also named several other senior politicians. MKINI

Zahidi: Pray Zahid is innocent or get ready to cleanse Umno

Hence, he said, the party should be prepared for any eventuality when it comes to Umno president Ahmad Zahid Hamidi’s corruption trials.

“The cases are on trial, and we hope that Umno prays that our president is safe.

“But if he is guilty, it means we, Umno Youth and all, must find the best way so that we enter this (upcoming) election clean.

“A clean Umno is accepted by the people,” he told reporters in Kuala Lumpur today.

Zahidi, who is also the deputy communications and multimedia minister, was speaking to the media after receiving a memorandum from Umno Youth delegates regarding the nation’s 5G network project.

The first is regarding the alleged misappropriation of funds from Yayasan Akalbudi, while the second is on corruption in the Foreign Visa System (VLN).

Zahidi is known to not be in line with Zahid.

Asked whether revelations on payouts by Ultra Kirana Sdn Bhd in the VLN case were discussed by the Umno supreme council, Zahidi replied in the negative.

The supreme council member said the matter would likely only be discussed if there were any verdicts.

Khairy, who is alleged to have received up to RM3.7 million, has denied personally receiving any funds.

The money is said to have been paid to the Rembau Umno division where Khairy is the deputy chief.

Khairy, Hishammuddin, and Reezal Merican were all in the government when Zahid was deputy prime minister. However, all three are believed to be in Umno’s anti-Zahid camp at the moment.

Meanwhile, asked about whether the 15th general election should be held early, Zahidi toed the party line and said the sooner the better.

However, he said there should be several factors to consider.

“For example, whether the people accept us, if the economy is ok, after October if the budget is looking good, if there are funds, then the people will be satisfied with the Umno led government, then we hold the elections quickly.