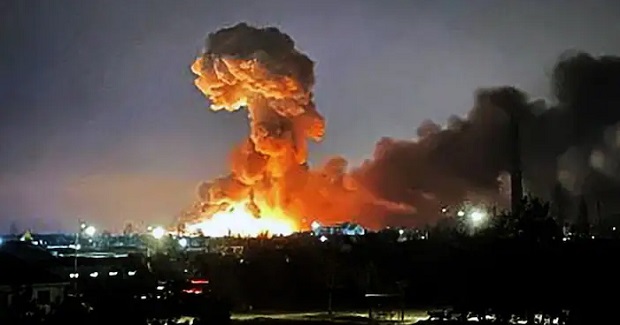 “We confirm that there are three injured and seven reported missing. We guarantee that the search will continue,” Governor Sergey Aksyonov said on Telegram on Monday, referring to platforms of the Crimea-based oil and gas company Chernomorneftegaz.

This is the first reported strike against the offshore energy infrastructure in Crimea since Russia invaded Ukraine on February 24.

Aksyonov, installed by Russia as the peninsula’s governor after the 2014 annexation by Moscow, had previously said five people were injured in the attack before revising the casualty figures.

He said three platforms were targeted, triggering the evacuation of 94 people on the sites, while 15 soldiers remained to guard them.

A search and rescue operation was continuing by air and sea, he said.
Chernomorneftegaz, sanctioned by the United States since 2014, operates several gas and oil fields in the Black Sea and in the Sea of Azov.

Aksyonov said that one platform had been hit, and Olga Kovitidi, a Russian senator for Crimea, told the RIA Novosti agency that there were no victims on the two other platforms that were targeted in the attack.

The Ukrainian military said a food warehouse in the Black Sea port of Odesa was destroyed in a Russian missile attack, but no civilians were killed.

Russia’s military did not immediately comment on the reports. SOURCE: NEWS AGENCIES – ALJAZEERA

Gazprom cut Nord Stream 1 volumes by 40 percent earlier this week, citing the delayed delivery of gas turbines it had sent to German Siemens for scheduled repairs.

Siemens, for its part, said that it had sent the turbines to be repaired at a Canadian factory, but new anti-Russian sanctions imposed by the federal Canadian government had stalled the return of the equipment.

“Due to the sanctions imposed by Canada, it is currently impossible for Siemens Energy to deliver overhauled gas turbines to the customer,” Siemens Energy said, as quoted by the Financial Times. “We have informed the Canadian and German governments and are working on a viable solution.”

Germany’s Economy Minister Robert Habeck, however, said the reduction of gas flows via the Nord Stream 1 pipeline was a political decision.

“Russia’s reason [for reducing gas supplies] is just a pretext,” Habeck said. “Their strategy is obviously to unsettle [people] and drive up prices.”

On Wednesday, Gazprom further reduced Nord Stream 1 volumes to a total of 60 percent and also cut supplies to Italy by 15 percent, which pushed European gas prices further up.

“Today’s developments are going to be a massive shock for gas prices as Europe is now going to struggle to refill its storages ahead of next winter if this reduction is for an extended period of time,” ICIS analyst Tom Marzec-Manser told the FT on Wednesday.

According to Bloomberg, Russian gas flows to its biggest European clients since the start of this month have fallen to the lowest since 2014. U.S. LNG supplies have meanwhile become problematic after an explosion at Freeport LNG prompted production suspension that will last for a minimum of three months, with a full return to normal operation coming no sooner than late 2022, according to the company. – Oilprice.com