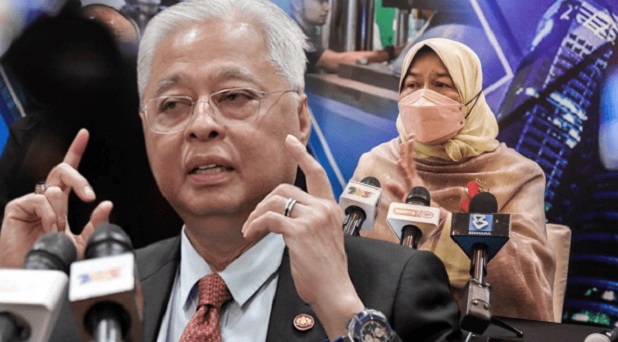 Almost a month since Zuraida Kamaruddin quit Bersatu, the political party which she proudly joined in August 2020 as a result of the infamous treachery “Sheraton Move”, unelected Prime Minister Ismail Sabri has yet to meet Zuraida to decide her current position as Plantation Industries and Commodities Minister. The turtle-egg premier, however, could no longer drag his feet.

Last week, Ismail finally said he would meet Zuraida this week to solve the issue – once and for all. Zuraida announced her “sayonara” to Bersatu (Malaysian United Indigenous Party) on May 26. On the same day, she put to rest rumours that she was joining Parti Bangsa Malaysia (PBM), a new political party formed “secretly” by herself together with Azmin as a backup plan.

It’s hard to believe that the prime minister, after his Official Workign Visit to Japan from 23 to 28 May 2022, could not even spare 10 minutes to meet Zuraida in the last 3 weeks. It was absolutely hilarious when PM Ismail admitted that Zuraida has been attending the weekly Cabinet meeting as usual, yet a small matter as simple as her ministership could not be discussed and decided promptly.

If the prime minister could not even decisively make a decision whether to retain or drop his minister, can you expect him to be competent enough to run the nation, let alone handle the current inflation? Ismail Sabri should stop trying to prove that both his intellectual abilities and leadership skills have been reduced to a deplorable – even retarded – state due to consuming too much turtle eggs.

In the same breath, the clueless PM Sabri, who looks half-awake most of the time, should stop worrying about losing power for making the wrong decision, leading to him becoming the shortest serving prime minister in the history of Malaysia. Regardless whether he keeps Zuraida or not, he cannot be toppled thanks to the MOU with Opposition Pakatan Harapan to keep him in power.

The accidental premier who got the job due to his lucky star – at the right place at the right time – was worried that if Zuraida is stripped of her portfolio, she might withdraw her support for the fragile unelected backdoor government. But if she is retained, former PM Muhyiddin might be offended and withdraw Bersatu’s support for the ungrateful Ismail Sabri. 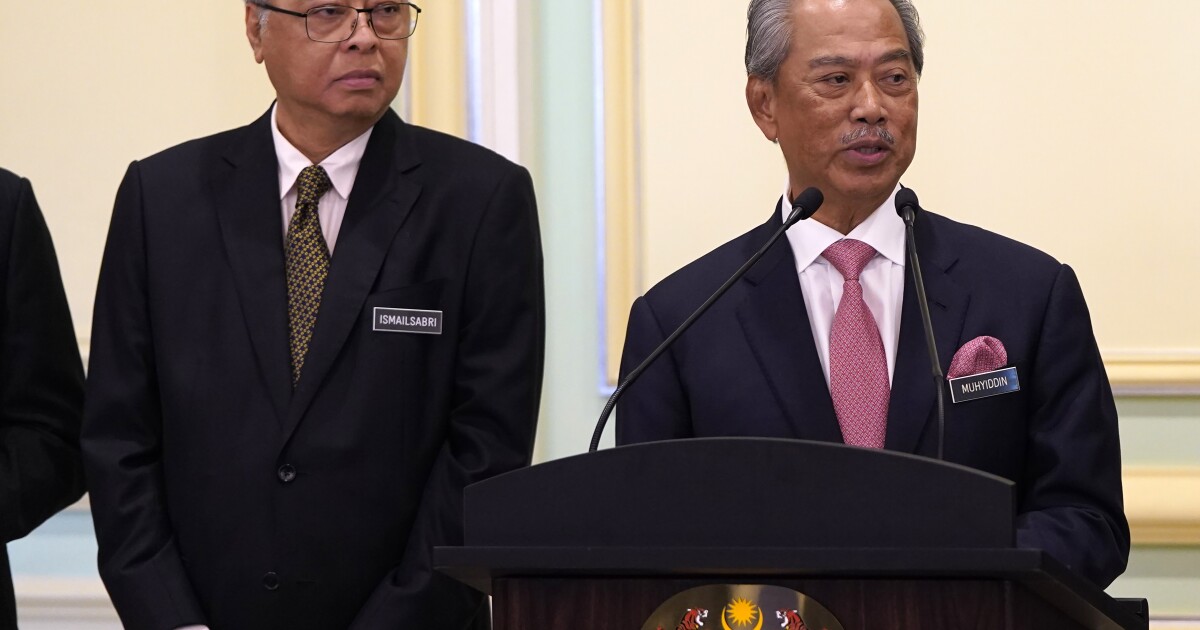 Zuraida was one of 11 MP traitors, led by Azmin Ali, who quit their former party PKR (People’s Justice Party) during the “Sheraton Move” in February 2020, leading to the collapse of the democratically-elected Pakatan Harapan coalition government. Essentially, millions of voters have been sharpening their knives, ready to slaughter the traitors in the coming 15th General Election.

Both Azmin and Zuraida had overlooked one huge problem when they hastily jumped ship – the inevitable infighting within Bersatu. The fact that Azmin and his band of defectors did not join Muhyiddin’s party until August 2020, some 5 months later, suggests that they had betrayed PKR without considering long-term political survival, even after more than 20 years of “Reformasi”.

Crucially, Zuraida, who was the Minister of Housing and Local Government under the previous Mahathir administration, had been given the same portfolio under Muhyiddin regime – until her demotion to the Ministry of Plantation Industries and Commodities under the current Sabri administration. At the end, Zuraida did not gain anything at all despite her epic betrayal.

Abandoning Bersatu proves not only Muhyiddin’s ship is sinking, but also shows Zuraida’s desperation to get out of the shithole she dug since March 2020. Her new party PBM will be slaughtered like a pig in the coming election. That’s why she is sucking up to PM Sabri, and shamelessly wanted to be friendly with UMNO, the same corrupt party which she had fought for 20 years.

Like a stinky street rat, the disgraced Zuraida Kamaruddin has nowhere to go. She is at the mercy of PM Ismail Sabri to retain her ministership. At the same time, she is at the mercy of UMNO president Zahid Hamidi to accept her party – PBM – as one of obedient lapdogs of the Barisan Nasional coalition. When Sabri or UMNO says jump, Zuraida can only ask how high.

But Zuraida isn’t alone in quitting Bersatu. Azmin and his band of former PKR defectors are expected to follow suit. After the humiliating defeat in the recent Melaka and Johor state elections, all the 11 traitors realized the mistake of joining Bersatu due to the party’s lack of non-Malay support, made worse by Muhyiddin’s unforgivable treachery and association with extremist PAS Islamist party.

If Zuraida is allowed to keep her Plantation Industries and Commodities Ministry even after leaving Bersatu, it would certainly embolden Azmin and his gang to also pull a similar stunt. There’s no honour among thieves. So, if everyone can keep their existing portfolios and it will be business as usual, it’s not rocket science why Azmin and his minions will dump Bersatu and switch sides to UMNO. And that’s precisely what terrifies former backdoor PM Muhyiddin, who was forced to resigned in August 2021 after just 17 months – currently the shortest serving prime minister in the country. Muhyiddin, who first betrayed his own government in March 2020, lost power after a faction of UMNO crooks known as the Court Cluster betrayed him by withdrawing support for his leadership.

After Zuraida left Bersatu, the party is reduced to 31 MPs. And if Azmin Ali together with the rest of the original former PKR MPs also quit, Muhyiddin’s party would be reduced to just 21 MPs. But the problem would not end there. More than two-thirds of the party is made of traitors – “frogs” – who jumped ship after the stunning defeat of ruling government Barisan Nasional in the 2018 General Election.

In fact, the domino effect of mass defections could see Bersatu shrinks to just 8 MPs, the leftover from the original 13 MPs, whom together with then-opposition Pakatan Harapan, defeated the scandal-plagued Barisan Nasional four years ago. Mahathir had led 5 Bersatu MPs to leave the party he founded after being betrayed by Muhyiddin, his former most trusted lieutenant.

There is another faction of 13 MPs in Bersatu who originally won the election under the UMNO ticket, but had jumped ship from UMNO to Bersatu. They might return to UMNO if the party leadership pardons them. If Zahid’s statement to consider the application of Zuraida’s PBM to join Barisan Nasional is any indicator, it appears UMNO is also ready to welcome back all its 13 former traitors.

While Zuraida is reaping what she sow for being a traitor, Muhyiddin too gets to taste his own medicine. Both traitors are struggling to stay alive. If Zuraida is seen as a desperate woman, Muhyiddin is even more desperate to ensure not only his party does not sink, but also fighting tooth and nail to ensure his Perikatan Nasional coalition does not self-destruct.

Therefore, Sabri can bet his last dollar that Muhyiddin dares not withdraw support for his government even if Zuraida keeps her ministry, despite Bersatu internal pressure for Muhyiddin to reclaim the portfolio. Muhyiddin’s party remains intact today because PM Ismail recycled the old bloated Cabinet of 73 ministers and deputy ministers he inherited from Muhyiddin – ensuring everyone is rewarded with power and position.

Interestingly, even Muhyiddin has yet to meet Ismail to pressure the prime minister to return the Plantation Industries and Commodities Ministry to Bersatu. Both UMNO and Bersatu supporters have been engaging in war of words to claim the portfolio. While Bersatu said it’s their quota, UMNO argued it’s the PM’s prerogative to allocate the ministry to whoever he likes.

While there’s nothing Muhyiddin could do if PM Ismail decides to maintain the status quo, it would create bad blood between them. Muhyiddin will be seen as not only weak, but his failure to reclaim Zuraida’s ministry will be a slap in the face of the party president. But Muhyiddin also knew Bersatu would break apart even faster if he withdraws support for Sabri government.

Alternatively, the prime minister could take over the portfolio, preventing Muhyiddin from losing face and stopping the potential mass defection of Azmin and his gang members. However, it means Bersatu could lose the portfolio to UMNO – forever. A Cabinet reshuffle, on the other hand, will send a message that Ismail isn’t ready to call for an early election, triggering new pressure from UMNO against the PM himself.

It appears Zuraida might get to keep her portfolio because Muhyiddin actually has no button to press. Lame duck Sabri is under pressure by his own party leadership to not entertain Bersatu’s demand due to the bitter rivalry between both parties. If indeed Ismail thinks the support from Bersatu was critical, he would have ordered Zuraida to resign last month, and not cooked up childish excuses till today.