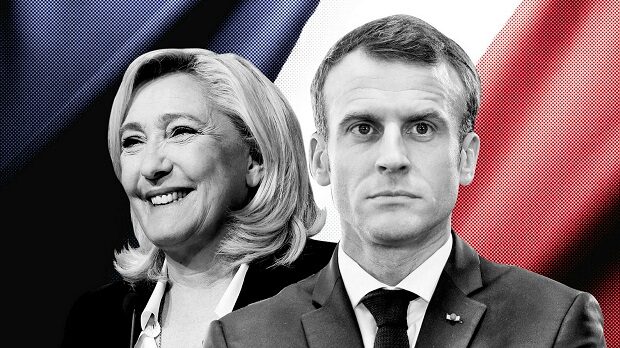 FRENCH President Emmanuel Macron lost his parliamentary majority today after major election gains by a newly formed left-wing alliance and the far right, in a stunning blow to his plans for major second-term reform.

The result from yesterday’s second round poll threw French politics into turmoil, raising the prospect of a paralysed legislature or messy coalitions with Macron forced to reach out to new allies.

Macron, 44, now also risks being distracted by domestic problems as he seeks to play a prominent role in putting an end to Russia’s invasion of Ukraine and as a key statesman in the EU.

Macron’s Together coalition will still be the biggest party in the next National Assembly, but with 245 seats, according to full interior ministry results announced in the early hours of today, it is well short of the 289 seats needed for a majority in the 577-member chamber.

“This situation constitutes a risk for our country, given the challenges that we have to confront,” Prime Minister Elisabeth Borne said in a televised statement, vowing: “We will work from tomorrow to build a working majority.”

The outcome severely tarnished Macron’s April presidential election victory when he defeated the far-right to be the first French president to win a second term in more than two decades.

“It’s a turning point for his image of invincibility,” Centre for Political Research of Sciences Po researcher Bruno Cautres said.

Le Monde daily headlined on its website: “Macron faces the risk of political paralysis,” while the Le Figaro daily said the results raised the spectre of a “stillborn new mandate”.

The new left-wing coalition Nupes under 70-year-old hard-left figurehead Jean-Luc Melenchon won 135 seats, according to an AFP count based on the results published by the ministry.

The coalition, formed in May after the left splintered for April’s presidential elections, brings together Socialists, the hard left, Communists and greens.

Melenchon called yesterday’s results “above all an electoral failure” for Macron.

“The rout of the presidential party is total and there will be no majority” in parliament, he told cheering supporters in Paris.

A prominent MP from Melenchon’s party, Alexis Corbiere, said the result meant Macron’s plan to raise the French retirement age to 65 had been “sunk”.

Far-right leader Marine Le Pen’s National Rally party made huge gains and will send 89 MPs to the new parliament, making it the biggest right-wing force in parliament ahead of the traditional right The Republicans (LR).

Le Pen hailed a historic result for her party, saying it would send “by far” its highest number of MPs to the next National Assembly.

Macron had hoped to stamp his second term with an ambitious programme of tax cuts, welfare reform and raising the retirement age. All that is now in question.

“This will complicate the reforms… It will be much more difficult to govern,” professor of law at Paris Pantheon-Sorbonne University Dominique Rousseau said.

“The slap,” the headline in the left-leaning Liberation’s morning edition said, adding the results represented the “fall” of Macron’s way of governing.

There could now potentially be weeks of political deadlock as the president seeks to reach out to new parties.

The most likely option would be an alliance with the Republicans, the traditional party of the French right, which has 61 MPs.

However, LR president Christian Jacob made clear there would be no easy partnership, saying his party intended to “stay in opposition”.

Economy Minister Bruno Le Maire denied that France would be ungovernable but admitted “a lot of imagination would be needed” from the ruling party in an “unprecedented situation”.

Macron had called on voters to hand his coalition a “solid majority” last week, adding “nothing would be worse than adding French disorder to the world disorder”.

In another blow, key ministers standing for election were set to lose their jobs under a convention that they should resign if they fail to win seats.

In a rare spot of good news for the president, Europe Minister Clement Beaune and Public Service Minister Stanislas Guerini – both young pillars of his party – won tight battles for their seats.

Turnout was low, with the abstention rate recorded at 53.8%, according to the interior ministry, higher than the first round but not beating the record worst turnout of 2017. – AFP – TMI

Marine Le Pen’s comments in an interview in early February this year were particularly forthright: “I do not believe AT ALL that Russia wishes to invade Ukraine,” she said.

The remarks were also rather unfortunate, given that barely a fortnight later Vladimir Putin sent thousands of troops, amassed on Ukraine’s border, into the country.

Russian bombardments have since flattened towns and cities, and there have been multiple reports of Russian soldiers murdering, torturing and raping civilians.

The challenger to Emmanuel Macron in next Sunday’s French presidential run-off said recently that she finds critics’ accusations that she is too close to Moscow tantamount to a “particularly unfair trial”, insisting she has only ever “defended France’s interests”.

However, the candidate from the far-right has openly expressed her admiration for the Russian leader in the past and has consistently defended Moscow’s foreign policy.

In an unprecedented move, in March 2017 the Russian president met with a candidate for the French presidency in Moscow in the run-up to the race for the Elysée that spring.

The meeting between Vladimir Putin and Marine Le Pen at the Kremlin reignited fears of Russian support for far-right groups in Europe.

The then “Front National” candidate had already sought party financing from a Russian bank — the loan is still being paid off — and repeated her intention to lift quickly EU sanctions imposed on Russia following its annexation of Crimea.

In an interview with the BBC, Le Pen tied her political colours firmly to the mast, citing as her inspirations the newly elected US president as well as the Russian leader.

Le Pen also blamed tensions with the West firmly on the US and NATO, which she accused of arming countries on Russia’s border.

“Ukraine is part of Russia’s sphere of influence, it’s a fact,” she said. “If you’re trying to say that Russia poses a military danger to European countries, I think you’re mistaken in your analysis.”

France should leave NATO’s allied command, she argued. “NATO was created precisely to fight the USSR. Today there is no USSR.”

Russia, Le Pen went on, didn’t “deserve to be treated with prejudice”, as it “hasn’t led any campaigns against European countries, or against the US”.

US intelligence and an official investigation concluded that Russia interfered with the 2016 US presidential election with the aim of boosting Trump’s candidacy. For several years Moscow has also been accused of interference and spreading disinformation in European elections.

“Russia is going broadly in the right direction,” Le Pen replied in the 2017 interview when asked whether Putin had done more harm than good, citing his intervention in Syria which was “positive for the security of the world”.

“What I notice is that Vladimir Putin’s government must at least please the Russians enough to be re-elected regularly in the country’s elections,” she said.

Elections in Russia since Putin came to power have regularly been criticised by human rights groups and international organisations as being neither free nor fair, while prominent opponents of the president have been barred from standing.

In a rerun of the 2017 vote, the two fundamentally different campaigns are both fighting for their own visions of how they want to see France’s role within the EU.

Macron, a staunch defender of the so-called European project, sees his country’s position in the bloc as a point of strength for France. And he wants this to continue.

But compared to his first run for president five years ago, the same enthusiasm for the EU is no longer on display.

Christophe Sente, a researcher at the Université Libre de Bruxelles, said it is due to his need to attract votes from the Eurosceptic far left.

“I think he has to take into account the logic of the second round, which assumes a carryover of votes, especially those of far-left candidate Jean-Luc Mélenchon,” Sente told Euronews. “So, Euroscepticism is not only on the far-right, it is also widespread on the left. And in his last speeches he called for a gathering of social democrats and neo-Gaullists, so not exactly passionate European federalists.”

Marine Le Pen on the other hand wants to take back what she calls French sovereignty. Previously, this included leaving the EU and dropping the euro currency, but she has since rowed back on these policies, moderating her views to broaden her appeal.

“I will bring back France’s sovereignty in all areas, which means freedom for the French people to decide for themselves and defend their interests,” Le Pen said.

Despite her attempt to make her politics more palatable to voters, her programme remains deeply Eurosceptic, with her National Rally party continuing its opposition to France’s European commitments, something that will be keeping Brussels concerned.

“Marine Le Pen is questioning certain obligations of France and is considering, for example, re-establishing border controls on goods, which would reimpose French borders within the single market, which cannot happen, it is contrary to the treaties,” Eric Maurice, head of the Brussels office of the Robert Schuman Foundation, told Euronews.

“Her migration policy too would also be strongly at odds with European commitments and partnerships with other member states.”

Their campaigns, of course, are defined by polar opposite visions of how they see France domestically, but they also have completely different ideas of France within Europe itself.