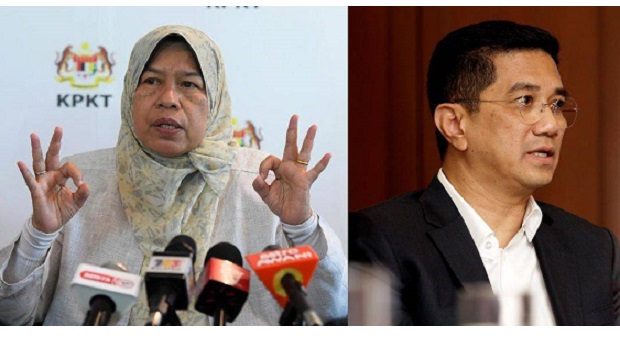 Zuraida and Azmin – from BFFs to bitter foes

DATUK Zuraida Kamaruddin used to be the right-hand woman of Datuk Seri Mohamed Azmin Ali but the former comrades are no longer talking to each other.

Their relationship turned sour not long after she followed him out of PKR into Parti Pribumi Bersatu Malaysia and there has been a cold war since last year.

It had to do with Zuraida’s role in forming Parti Bangsa Malaysia (PBM), the new multi-racial party that is eyeing membership in Barisan Nasional.

She has been named president designate of PBM and will be known as “ibu president” once the position is official.

Azmin took it badly. He felt betrayed and, ironically, so did Zuraida who felt that Azmin had failed to look after those who followed him out of PKR.

They could not fit into the Bersatu political culture which they found to be too Malay and right wing.

“They were unhappy and did not sign up as members because Bersatu was not what they expected,” said PBM supreme council member Lee Chin Cheh.

Zuraida also felt overlooked especially after she was shuffled from Housing and Local Government to the Primary Industries portfolio last year.

“I’m not sure what went wrong but she showed up at only a few supreme council meetings. Then we didn’t see her anymore, whether at meetings or programmes.

“What we knew was that she had approached people in Bersatu to join her party,” said Bersatu deputy president Datuk Seri Ahmad Faizal Azumu.

All this has affected Azmin’s standing especially with rumours swirling of more elected representatives leaving for PBM.

His own loyalty is being questioned and he had to openly declare that he is committed to Bersatu.

Actually, Azmin was dead against the formation of PBM because his ambitions are now invested with Bersatu. He was the one who pushed for his former BFF to be sacked from the supreme council last month.

The International Trade and Industry Minister believes that Zuraida is where she is today because of him. But he would not have been so successful without Zuraida organising the ground for him.

Zuraida was finally issued a show cause letter on May 23 to explain why she should not be sacked.

“I was with her when she got the letter. She had been expecting it and decided to resign a few days later,” said Lee who is her long-time confidante.

Bersatu president Tan Sri Muhyiddin Yassin had also tried to persuade her to stay on till after the general election because his party needs as many YBs as possible to strengthen the ranks and maintain its clout in the government.

“It is her democratic right though it’s sad to see a comrade go. However, the portfolio is part of Bersatu’s quota, she should do the gentleman thing and let go,” said Seberang Jaya assemblyman Dr Afif Bahardin, who is a top aide of Azmin.

Muhyiddin has recently renewed calls for Zuraida to be removed from the Cabinet. He even claimed that the Ampang seat which Zuraida won on a PKR ticket now belongs to Bersatu.

However, Prime Minister Datuk Seri Ismail Sabri Yaakob has been beating around the bush about replacing Zuraida.

The excuse is that he has yet to meet her to discuss her position even though she was on his working trips to Japan and Turkey.

Claims that Bersatu had submitted names to Ismail Sabri to replace Zuraida were also untrue because the Prime Minster has not asked for any names.

Well-placed sources in Putrajaya suggest that the Prime Minister is reluctant to make unnecessary changes to the Cabinet just to accommodate Muhyiddin’s power play.

It would also be a waste of time because the Prime Minister may call for an election before the new minister can warm his or her seat.

Will the Prime Minister give in to pressure from Muhyiddin or will he stand his ground?

On a personal level, Zuraida is quite prepared to resign from the Cabinet but was told to wait for the signal from the Prime Minister.

It is also learnt that she met Umno president Datuk Seri Dr Ahmad Zahid Hamidi at his residence last week to discuss the possibility of PBM joining Barisan.

PBM could fill the lacuna left by Gerakan and it could reach out to those who are averse to giving their votes to Umno or MCA.

With Zuraida as “ibu presiden,” the party may also have appeal among women.

Ahmad Zahid seems open to the idea but the decision calls for consensus from other Barisan partners. MCA and MIC would want assurances that PBM will not ask to contest seats that belong to them.

PBM will also have to respect Barisan’s policy of not contesting in Sarawak. Gabungan Parti Sarawak (GPS) is a valuable friend whom Barisan leaders have no intention of offending.

This will be a dilemma for Larry Sng, the current PBM president who plans to defend his seat in Julau, Sarawak.

Sng and his warlord father Datuk Sng Chee Hua played a part in the formation of PBM, but the younger Sng may have to go in as an independent.

Finally, why is Ahmad Zahid and the Umno gang giving so much face to Zuraida’s party?

The answer is quite simple – the enemy of my enemy is my friend.

Zuraida and those with her are undermining Bersatu’s prestige while Umno enjoys the show.