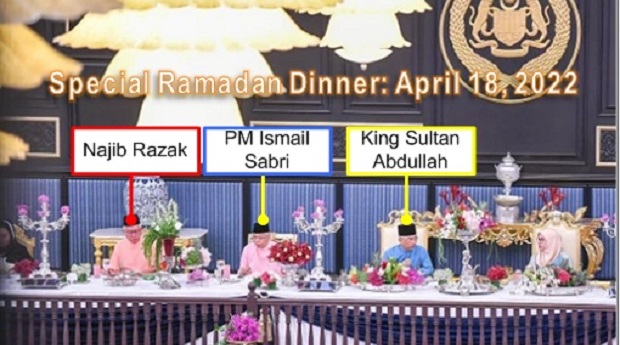 At the 93rd convocation ceremony for Universiti Teknologi Mara (UiTM) three days ago, Malaysia’s King (Agong) delivered a speech which every citizen has been waiting for. The monarch said Islam and all religions in the world condemn and denounce corruption as it is a cancer that could destroy civilisations. He gave an example how the Sultanate of Melaka collapsed due to corruption.

The Yang di-Pertuan Agong (King) said young graduates must be instilled and nurtured with good core values to develop honest characters as they would eventually inherit the country. King Sultan Abdullah of Pahang, who is the chancellor of UiTM, lectured that all institutions of higher learning must instil elements of honesty, trustworthiness, and integrity in every student.

However, there are at least five problems with the speech delivered by the Agong, also known as the Paramount Ruler or King of Malaysia. Firstly, is the monarch absolutely sure that Islam is against corruption? Has he sought advice from PAS Islamist party? In case the King didn’t get the memo, PAS president Abdul Hadi Awang has a new definition about corruption in Islam.

According to Mr Hadi, who is also special envoy to the Middle East with ministerial rank, a Muslim who desperately needs money should not be categorized as corrupt for receiving bribes. The supremo of the Islamist party, in an attempt to legitimize corruption, argued in 2021 that from the Islamic perspective, certain people are not necessarily corrupt even though they received kickbacks.

In fact, according to whistleblower Sarawak Report, Hadi was himself bribed with RM90 million by then-PM Najib Razak to quit and split then-Opposition Pakatan Rakyat after the 2013 General Election. The grand plan was to split the votes by engaging in three-cornered contests in the 2018 general election, which eventually backfired and saw Najib lost power instead.

In the audio recording, Nik Abduh, the son of PAS former spiritual leader Nik Abdul Aziz, was caught in his remarks to a delegation of PAS members admitting that PAS top leaders – including himself – had accepted money – from UMNO, in order to further the party’s political agenda. The meeting was held over debates amongst PAS leaders about the scandal of the party receiving money.

Ultimately, Hadi chicken out and did not proceed with the lawsuit. With tail between legs, he quietly paid RM1.4 million as part of an out-of-court settlementin February 2019 to the Sarawak Report website. The settlement between Hadi Awang and Clare Rewcastle-Brown can only mean one thing – the PAS president and his minions had indeedreceived RM90 million bribes from UMNO in 2016.

Shifting from his corruption to damage control, Hadi pre-emptively said in January 2019 that Muslims should continue to trust Muslim leaders, regardless of the crimes they may have committed – a statement which was clearly referring to his RM90 million bribes. The corrupt and radical PAS leader said – “If the one leading is a Muslim, even if he was cruel, at least others can become cattle herders”. 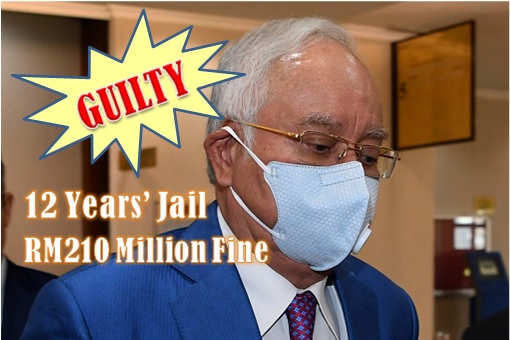 Hadi  said – “But if the one who leads is a non-Muslim, even if he were the kindest, (others) can work however they wish [but] without any limits of what is ‘halal’ (allowed) and ‘haram’ (forbidden) they will still end up in hell. Don’t ever take the infidel West as an example, because the best of them will still end up in hell, since their kindness is without any faith in Allah and the End Times.”

Exactly why should King Sultan Abdullah consult Hadi Awang ion the subject of corruption in Islam? That’s because in the Don Odori fiasco, the PAS Islamist party has claimed that even though Sultan Sharafuddin is the Head of the Islamic religion in the state of Selangor, the Malay Monarch was ignorant in the Islamic teaching, so much so that the sultan’s decree can be rubbished.

And since the King did not reject PAS’ declaration that Sultan Selangor’s decree to allow “anyone” to attend the Japanese Bon Odori Festival was wrong, it’s safe to assume that the King agrees with PAS Ulama Council’s verdict. Meaning the King is wrong about Islam condemns corruption because PAS leaders somehow disagreed that corruption is a cancer that could destroy civilisations.

Secondly, if Islam condemns corruption, why did the King agree to the formation of a Malay-Muslim backdoor government called Perikatan Nasional in March 2020, despite knowing very well that corrupt leaders such as Najib Razak, Zahid Hamidi, Ahmad Maslan, Abdul Azeez Abdul Rahim, Tengku Adnan, Bung Moktar and of course, Hadi Awang, would be part of the government?

Does the King really need a rocket scientist to tell him that heprioritizedcorruption over Islamwhen he happily put a bunch of crooks in charge of the country, despite the dubious majority support commanded by Muhyiddin Yassin back then? Worse, British tabloid The Guardian called it a “Royal Coup” – suggesting that the Malaysian monarch was somehow involved in returning the extremely corrupted UMNO political party to power.

Thirdly, it was revealed in the 2021 Corruption Perceptions Index (CPI) that there is not a single Muslim country ranked in the “Top-20 Least Corrupt Nations” out of the 180 countries surveyed. Malaysia plunged to 62nd position. Muhammad Abduh, a 9th century Egyptian scholar once said – “I went to the West and saw Islam, but no Muslims. I got back to the East and saw Muslims, but not Islam.” 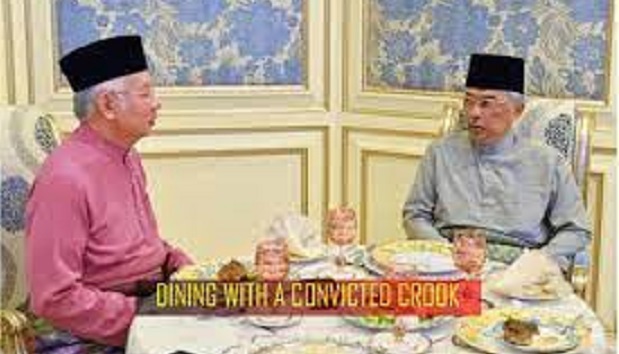 Yet, about 200 years later, corruption still remains the main problem in many Muslim-majority governments in the Middle East, North Africa and Asia, including Malaysia. So, can the Agong, in his capacity as the Head of Islam in his own state of Pahang and the entire nation, explain why corruption is so alive, widespread and vibrant in Malaysia – a Muslim-majority country?

Fourthly, after Najib Razak was arrested and charged of corruption in stealing billions of dollars from the 1MDB sovereign fund, the Negri Sembilan palace had revoked the “Datuk Seri” titles that were conferred on the former premier and his wife Rosmah Mansor. Likewise, the Royal House of Selangor had also suspended “Dato’ Seri” title awarded to Najib and his wife.

However, Sultan Abdullah of Pahang, who was installed as the 16th King of Malaysia in July 2019, hasyet to strip any title awarded to Najib– even though the crook has been sentenced to12 years in prisonin July 2020 and fined RM210 million after he was found guilty of all charges of abuse of power, criminal breach of trust (CBT), and money laundering. Does not Islam condemn corruption?

More importantly, despite having been found guilty by the High Court in July 2020 as well as the Court of Appeal in Dec 2021, the Yang di-Pertuan Agong saw no reason not to invite Najib – the world’s biggest crook – to the Palace for a special dinner during Ramadan on April 18, 2022. The invitation to wine and dine with the King has led to speculation that a royal pardon is already on the table.

Not only Najib – a convict – was invited to wine and dine with the King, the crook was seated at the high table alongside PM Ismail Sabri, who in turn seated next to the monarch. Exactly what type of message the Sultanate of Pahang is trying to send to the people and the world?Not even Bersatu president Muhyiddin Yassin or PAS president Hadi Awang enjoyed such royal privilege.

Sure, Mr. Najib holds the “Orang Kaya Indera Shahbandar” title, which he inherited from his late father. The title, which dates back about three centuries in 1722, was accorded to him by the Pahang palace by virtue of the title being hereditary. The title is one of the four highest ranking nobles below the monarch – hence also known as the “Orang Besar Berempat”, loosely translates as “the four chiefs”.

But does that mean as one of the four chiefs who wielded wide powers in Pahang during the ancient times of the Old Pahang Sultanate, it automatically grants Najib immunity from corruption, something which King Sultan Abdullah has condemned as against Islam and a cancer that could destroy civilisations? Is the Royal House of Pahang trying to say that Najib is above Islam?

Even though the monarch has a special close relationship with Najib, at least the monarch should pretend to despise corruption and distance himself from the despicable convicted crook, who still insists that the RM2.6 billion (US$681 million) discovered in his private bank accounts was “donation” from Saudi Arabia royal family, a claim that has been found to be false and fake.

To add salt to insult, the Queen was seen laughing and hugging Najib’s wife Rosmah as the monarch happily sent the crooks off after the wonderful dining at the Palace. Does it not scream hypocrisy when the King lectured UiTM graduates about Islam condemning corruption, but at the same time, the monarch himself appears welcoming corruption when it comes to one of his kind?

Najib possessed many skill sets – but honesty, trustworthiness, and integrity is not one of them. All the three judges of the Court of Appeal, in upholding the guilty verdict against Najib, have even labelled the former prime minister a “national embarrassment”. King Sultan Abdullah should explain why he had to invite such a disgraced Muslim leader to his Palace during the holy month of Ramadan.