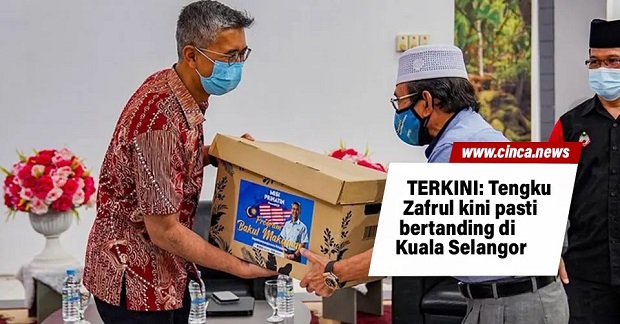 Focus on your job, not Kuala Selangor, Tengku Zafrul told

FINANCE minister Tengku Zafrul Tengku Abdul Aziz should focus on his job and the economy and not try to woo voters in Kuala Selangor, said Umno vice-president Khaled Nordin.
He also said the Treasury does not need to “adopt” any parliamentary constituency.

His comments come after Tengku Zafrul over the weekend announced that he will be “adopting” the district.

Khaled said Putrajaya should instead address issues like the surging food and commodity prices, recurring traffic congestions and LRT delays.

He added that passports take weeks to be renewed and thousands wait in long lines at the Johor-Singapore Causeway.

“Barisan Nasional is also responsible for all of this as it is part of the government. The prime minister is facing attacks due to negligence by ministers in carrying out their responsibilities,” he wrote on Facebook today.

“It is unfair to blame the prime minister when ministers should step up to the plate and show leadership.

“However, for the finance minister, his priority appears to be Kuala Selangor.”

Tengku Zafrul is allegedly eyeing the Kuala Selangor parliamentary seat and has attended several high profile activities in the district.

He created a stir on Saturday, when he said he will be “adopting” the district.

The senator hosted the Majlis Kenduri Rakyat in Puncak Alam yesterday, where he said his ministry is “adopting” Kuala Selangor and help spur its development.

“Personally, I am a little sentimental about the Kuala Selangor district,” he told the audience, as quoted by Bernama.

“There are many local potentials that can be developed and highlighted.”

His announcement also received flak from DAP secretary-general Anthony Loke, who said the “adoption” is an abuse of authority.

“I have been an MP since 2008 and never heard of any federal ministry ‘adopting’ a district.

“A ministry should be making policies and delivering services nationwide, not just for a locality.”

Tengku Zafrul has also irked local Umno leaders with his activities in the district.

Kuala Selangor Umno chief Jahaya Ibrahim said these activities are “disruptive” to the grassroots machinery there.

The finance minister is taking advantage of Umno’s restored popularity to stake a claim for the seat, he added.

“We have been working hard since 2018, and now he comes here after we have done all the work,” he told The Malaysian Insight.

The ex-health minister first won the seat under PAS in 2008, but lost it to Barisan Nasional in 2013.

He reclaimed the seat in 2018, defeating Umno’s Irmohizam Ibrahim and PAS’ Mohd Fakaruddin Ismail with a 8,498-vote majority.  TMI

FINANCE Minister Tengku Zafrul Abdul Aziz’s presence in Kuala Selangor amid talk that he is eyeing the seat has made certain local Umno leaders unhappy.

Zafrul and his team have launched a publicity campaign in the area with activities promoting the senator without going through the local Umno leadership, which is “disruptive” to the grassroots machinery there, said Umno division chief Jahaya Ibrahim.

He told The Malaysian Insight that Tengku Zafrul was taking advantage of Umno’s restored popularity to stake a claim to the seat.

“We have been working hard since 2018 and now he wants to come here after we’ve done all the work,” said Jahaya.

“He tried to come here but the Kuala Selangor Umno division rejected him. But despite our rejection, he persists in encroaching on our territory.”

Jahaya said this is upsetting the local machinery which is preparing for the general election, which expected to be called soon.

Although Tengku Zafrul has not commented on the issue, the senator is rumoured to be interested in contesting in GE15. Media have speculated on a few seats, including Kuala Selangor where he has been holding programmes recently.

Umno higher-ups have not commented on the possibility of Tengku Zafrul becoming a party candidate.

Umno secretary-general Ahmad Maslan confirmed that the former banker is a long-time Umno member, a fact that is not widely known. Zafrul was appointed finance minister by Bersatu’s Muhyiddin Yassin is seen as a Muhyiddin ally. He kept his portfolio under the Ismail Sabri Yaakob administration.

According to Jahaya, Selangor Umno leaders have been informed about Tengku Zafrul’s presence.

“I have told Selangor chief Noh Omar that I’m against his intrusion.”

Jahaya said he has also sent letters to all the Umno branches in Kuala Selangor not to take part in Tengku Zafrul’s events.

“I will raise the matter to the Umno disciplinary board if Tengku Zafrul continues to intrude into our area,” he added.

However, while Jahaya is clearly against Tengku Zafrul’s “interest” in the Kuala Selangor seat, Noh has dismissed the “intrusion”.

In a statement on May 18, Noh said that it was acceptable for Tengku Zafrul to be seen in Kuala Selangor as the state needed “minister-level” leaders in the state ahead of GE15.

“I am not questioning his qualifications. But why is he only showing up in Kuala Selangor when Umno has 22 divisions in the state.

“If he is genuine about helping Selangor, he should go to all the divisions and not just Kuala Selangor. Would he be here if Umno is weak?” said Amin.

The Amanah strategist first won the Kuala Selangor seat in 2008 under PAS before losing it to Barisan Nasional in 2013. In 2018, Dzulkefly won the seat again after defeating Umno’s Irmohizam Ibrahim and PAS’ Mohd Fakaruddin Ismail by 8,498 votes. TMI

He said that while he wanted his constituents to benefit from development and prosperity, Tengku Zafrul’s apparent adoption of a “cash is king” culture was worrying.

“I’m confident the Kuala Selangor people will not be easily taken in by what appears to be political bribery to win support.

“It is also very worrying that he (Tengku Zafrul) seems inclined towards a ‘cash is king’ culture. It is a moral hazard in a country that aspires to eradicate power abuse and corruption,” the Amanah leader said in a statement today.

Dzulkefly also said Tengku Zafrul ought to fulfil his promise of setting up an Urban Transformation Centre (UTC) at Lembah Pantai.

“He made this promise when he appeared to be eyeing the parliamentary seat there in 2020,” he said.

He said the promise of a new East Coast Rail Link station at Puncak Alam, and the finance ministry’s adoption of Kuala Selangor were unprecedented in 60 years of the Alliance and Barisan Nasional governments.

“The minister appears to be a desperado. He should fulfil earlier promises rather than spread sweet, new promises,” he said.

There has been speculation that Tengku Zafrul will contest for the Kuala Selangor parliamentary seat in GE15 on an Umno ticket. He is said to be an Umno member in the Lembah Pantai Umno division, according to a news report.

He recently announced the “adoption” of Kuala Selangor under his ministry and said an East Coast Rail Link station was slated to be built at Puncak Alam.

Observers had described this as a “clear indicator” that he will contest for the parliamentary seat.