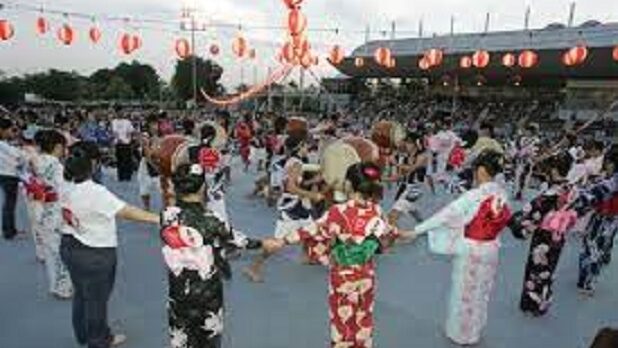 Muslims advised not to participate in Bon Odori fest

SUNGAI BESAR: Muslims are advised not to participate in the Bon Odori festival to be held at the Shah Alam Sports Complex on July 16 as the festival contains elements of other religions, says Datuk Idris Ahmad.

“A study conducted by the Malaysian Islamic Development Department (Jakim) found that the festival does have religious elements, so we advise Muslims not to participate in it,” said the Minister in the Prime Minister’s Department (Religious Affairs).

He told the media after attending the groundbreaking ceremony for the Selangor Islamic Education Foundation’s (Yapis) education complex project here.

He said this when asked to comment on the annual Japanese festival, which has also received negative reactions on social media, especially among Muslims in the country.

The event’s promotional poster also depicted an anime of a kimono-clad woman wearing a hijab.

“That’s why we hope such confusion does not arise. Jakim as the coordinating party (of Islam in the country) advises Muslims not to participate in programmes like this or any programme that could affect our religion and beliefs,” he said.

On another note, Idris said that a man referred to on social media as “The Hood Man” had been located and all the information given by the person would be used as material for his (Idris) team to take the next course of action.

Jakim was previously trying to locate the man to assist with allegations he made on social media that the Thomas Foods International (TFI) Lobethal slaughterhouses in Australia did not comply with Malaysian halal standards and procedures.

“I am confident that in Australia, there is no problem with such disclosures because it (the country) gives great importance to consumerism,” he said.

He added that Jakim had suspended TFI’s slaughtering approval with immediate effect until the results of a comprehensive probe were obtained. – Bernama

Queen Elizabeth II has delighted millions of viewers by appearing in a surprise comic sketch with Paddington Bear, revealing she loves marmalade sandwiches, and keeps an emergency stash in her famous handbag.

The monarch and the famous bear – both much-loved British institutions – met for a chaotic cream tea at Buckingham Palace in a special, secretly-pre-recorded sequence played at the start of the televised BBC’s Platinum Party at the Palace.

The duffle-coat wearing bear told the Queen how he ensured he always had his favourite treat on him just in case, lifting up his red hat to reveal his snack.

The Queen responded by saying: “So do I,” before opening her bag and declaring: “I keep mine in here”, before showing her very own ready-made supply of the bread and orange preserve staple, adding: “For later.”

Paddington caused raised eyebrows from a Palace footman by gulping down his tea from the spout of the teapot, and leaving none left for the amused Queen, who declared: “Never mind.”

The accident-prone bear was shown causing mayhem by accidentally spraying a splodge of cream from a chocolate eclair onto the footman’s face.

The bear, from deepest darkest Peru, congratulated the Queen on her reign of 70 years, saying: “Happy Jubilee Ma’am. And thank you. For everything.”

The unlikely duo then tapped out the beat of the We Will Rock You anthem together on china teacups using silver spoons as a unique way of getting the concert under way.

With the two-and-a-half-minute film played at the start of the televised BBC’s Platinum Party at the Palace, the novel duet tapped out the rhythm for opening act Queen + Adam Lambert – who joined in on the main stage.

The film was kept under wraps for several months by Buckingham Palace, BBC Studios and Heyday Films/StudioCanal.

It brought back memories of the Queen’s James Bond skit for the London 2012 Olympic opening ceremony, when the monarch met 007, played by Daniel Craig, and then appeared to parachute into the stadium, with the help of a body double. – dpa