A trending restaurant in Beijing filled with customers on June 6, 2022 as the city resumed dine-in services at midnight. Photo: Li Hao/GT

After a month-long pause to dine-in services in Beijing’s eateries, nightlife in China’s capital city is now getting its mojo back. Doorways were jam-packed with youngsters in long queues waiting to be served upon reopening at midnight on Sunday, with customers eager to indulge in many of the city’s delicacies including fresh crawfish with cumin skewers and the cheerful clinking of beer glasses.

As Beijing announced a resumption of dine-in services on Sunday followed by the reopening of schools and scenic spots as from Monday, and as life in Shanghai has returned back to normal, the economic engines of China’s two most important metropolises have started roaring back to life with the restaurant industry leading the charge.

Experts say the revival of the restaurant industry in Beijing and Shanghai highlights the industry’s huge energy and immense vitality in boosting the world’s biggest consumer market – great attractions for both Chinese and global investments especially in the post-pandemic era – considering China’s growing middle class who seek for diversified and innovative consumer experiences.

Processes behind the making of popular night snacks in megacities like Beijing or Shanghai may drive the development and employment of over a dozen related industries, and also stimulate the platform economy.

Data from the National Bureau of Statistics show that the 2020 revenue of China’s food and beverage industry was 395.27 billion yuan ($59 billion), down 15.4 percent from 2019 due to the impact of the epidemic, but the food and beverage industry saw its revenue bouncing back in 2021, reaching 4.6895 trillion yuan, up 18.64 percent year on year, maintaining its pre-epidemic market share. Food industryrevenue accounted for 10.6 percent of the total retail sales of consumer goods.

China’s “eating economy” is also among the fastest-growing in the world. Food and beverage consumption is expected to become one of the top essential factors driving economic growth in China and the world in the future, with huge future potential, observers stressed. 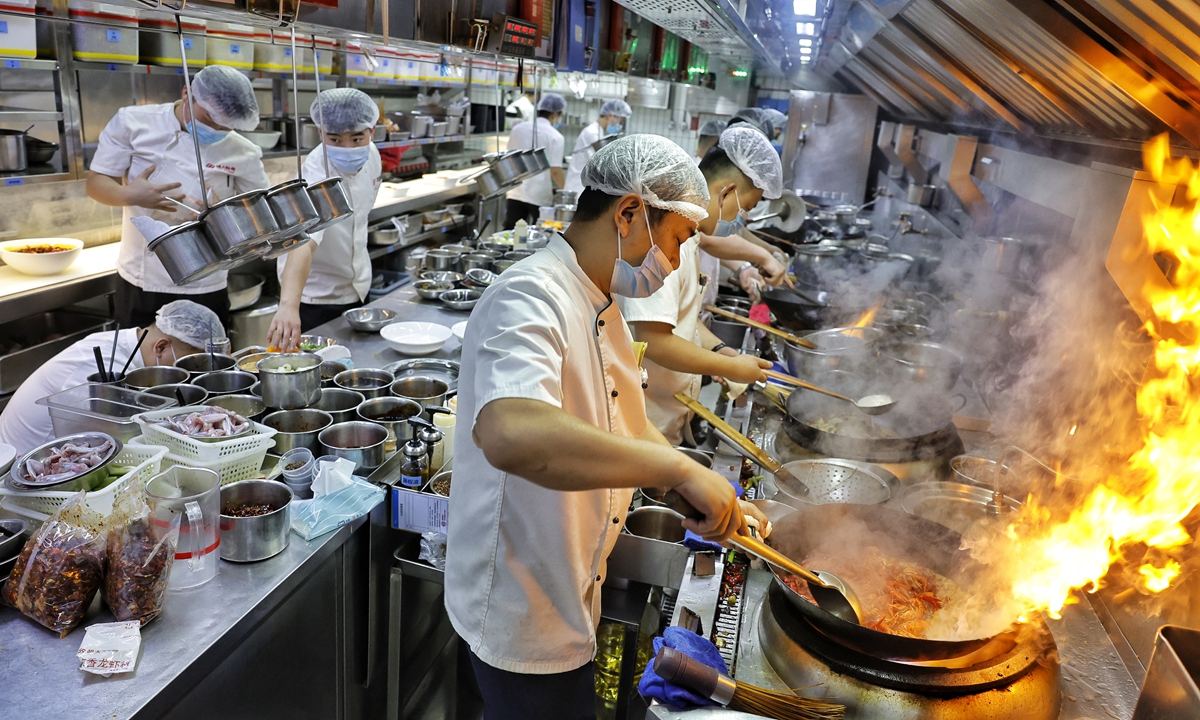 A busy kitchen of a restaurant in Beijing on June 6 Photo: Li Hao/GT
Back in full swing

Beijing’s 36-day ban on dine-in services has seen a variety of interesting outdoor dining experiences emerge – picnics on the roadsides or boats, barbecues in parks, and elaborate take-away boxes at the doors of the restaurants with hoarse vendors calling out to potential customers.

Guijie Gourmet Street in Beijing, 1,472 meters long, is home to more than 150 commercial shops, of which more than 90 percent are food and beverage outlets. Over the past 36 days, restaurant owners to dishwashers alike were all glued to their TV screens airing press conferences, waiting, and hoping for the good news. Many said that they had “rehearsed” the scene of the resumption of dine-in services countless times in their minds.

On the eve of the resumption, many restaurants in Beijing had been actively preparing for a return to normal as customers called to secure their reservations.

“We see the comeback in full swing,” a waiter at a popular night snacks chain store located at the Guijie Gourmet Street told the Global Times on Sunday, noting that their restaurant, which was opened shortly after midnight, was soon half full – as authorities set a cap of 75 percent for restaurants’ capacity.

Shouguang county, 460 kilometers away from Beijing and known as the capital city’s vegetable basket, has also ramped up services to guarantee a sufficient and stable vegetable supply. A Shouguang vegetable vendor surnamed Fu told the Global Times on Sunday that they had increased their stock by two or three times more than the usual amount, expecting a new surge in shipments after the resumption of the dine-in services in Beijing.

Some fruit and vegetable vendors in Shouguang are also scrambling to recruit drivers who also have to meet the strict epidemic prevention requirements. 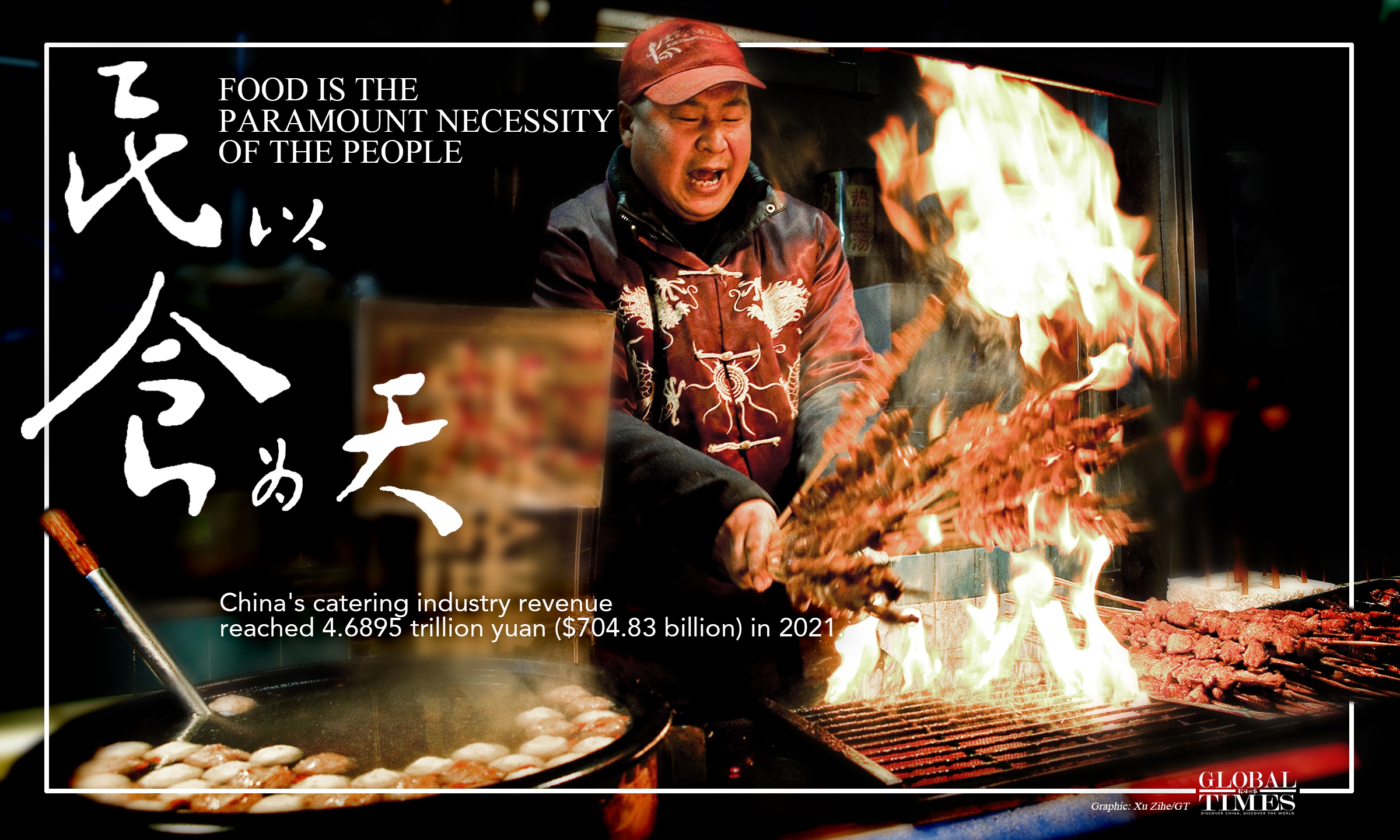 The resurgence of Beijing’s restaurant industry reminds people how orders for hot dry noodles soared after the city of Wuhan lifted its lockdown in April 2020. Wuhan’s signature noodles become a symbol of solidarity amid the outbreak of the coronavirus infections. Many cheered on COVID-hit Wuhan in 2020 with signs saying “be strong, hot dry noodles.”

Many shopping malls and restaurants in Shanghai also opened most of their doors on June 1, the first day of Shanghai’s lifting of lockdown restrictions. The internet had been buzzing with stories of people lining up on the streets to buy freshly cooked steamed buns and other local Shanghai snacks.

Mei Xinyu, a research fellow with the Chinese Academy of International Trade and Economic Cooperation under the Ministry of Commerce, told The Global Times that the social function brought along by dine-in services cannot be replaced, he called their resumption an important driving force for the rapid recovery of urban life and the economy.

The shutdown of the food and beverage industryis a major blow to many people’s livelihoods in general and to the economy as a whole, so the necessary recovery is very timely, with the government’s bailout policy constantly being updated, Liu Yingqiu, an economic expert at the Chinese Academy of Social Sciences (CASS), told the Global Times.

Lance Le, the manager of 49 Bar & Coffee shop near the Liangma River in Beijing – a holiday hot spot in the capital – felt excited when he received the news about dine-in services resuming and immediately thought out the preparations.

With almost no revenue in May, Le suffered losses from perishable ingredients like vegetables and milk going rancid and having to pay rent and the full salaries of his restaurant staff.

“Fortunately, no one in our shop left and everyone understood the government’s policies, and felt confident about customer traffic after the resumption,” Le told the Global Times.

Summer evening dining along Guijie is accented by customers patiently waiting to indulge in the street restaurants’ signature dish – crawfish.

As of 2019, the crawfish market in China was worth nearly 400 billion yuan ($60 billion). Spurred on by the immense popularity of crawfish, countless entrepreneurs and investment institutions choose to farm crawfish. Breeding and production scales has continued to expand, driving the development of numerous industries. 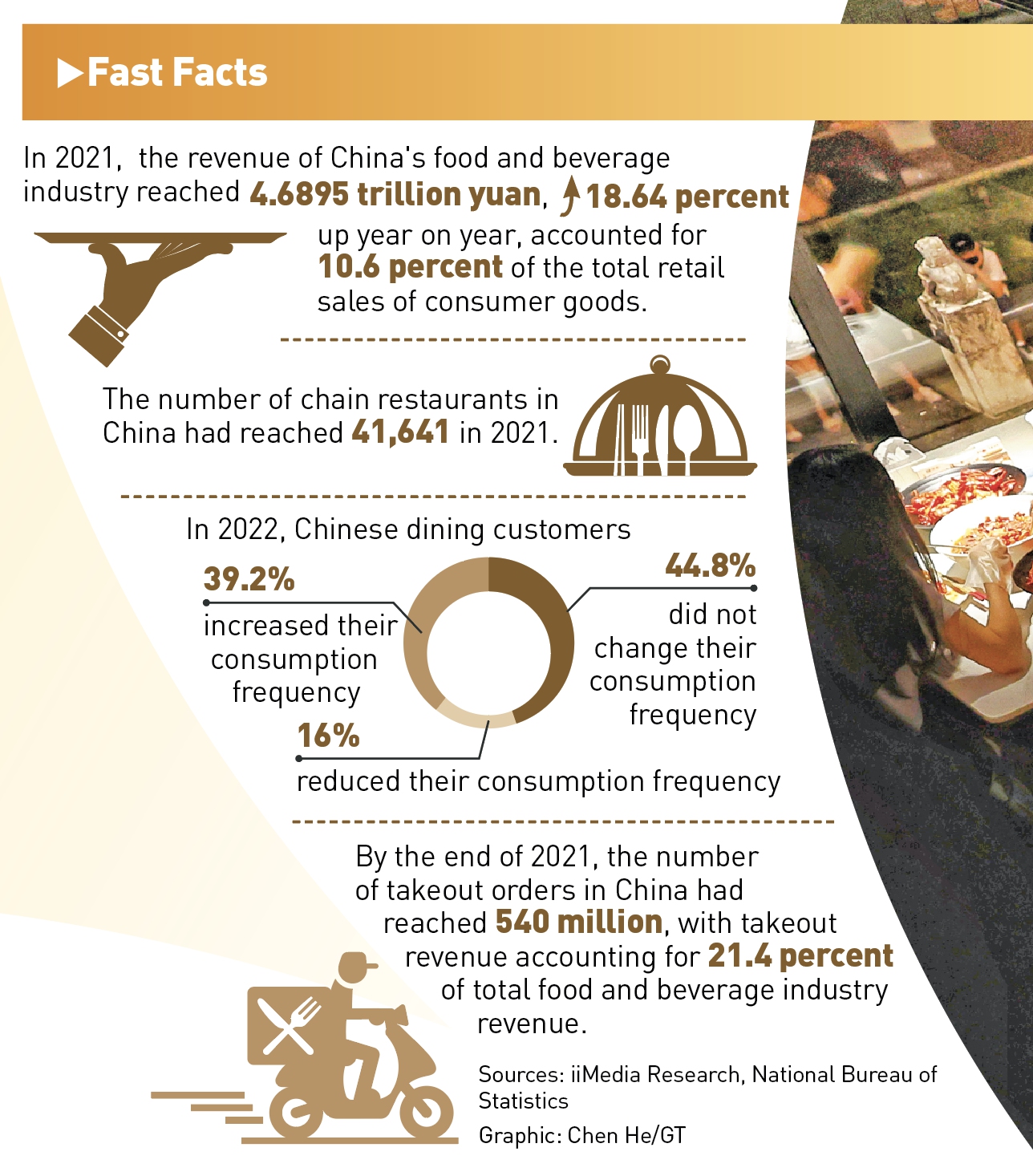 The development of the crawfish production industry is just one side of the market-driven and dynamic role of China’s food and beverage industry.

Analysts pointed out that in recent years, China’s catering market has shown resilience and its contribution to the national economy has become increasingly prominent.

An analysis report released in April by IiMedia Research, a Guangzhou-based economic data analyst, shows that the number of chain restaurants in China had reached 41,641 in 2021.

According to iiMedia Research, by the end of 2021, the number of takeout orders in China had reached 540 million, with takeout revenue accounting for 21.4 percent of total food and beverage industryrevenue.

The food delivery market in Beijing grew by about 20 percent over the May Day holidays when dine-in food services were suspended, industry sources said

Data show that during the epidemic, digital services industries such as takeout order placements and electronic payments surged with increased investment. In turn, the rapid development of logistics has stimulated people’s need to evolve their consumption palate, making overseas delicacies and rare seafood ingredients more accessible, said Pan Helin, an economics professor at Zhongnan University of Economics and Law.

The rise of some large food and beverage services groups has kept expanding and further stimulated other industries including transportation and food processing. The role of food and beverage industry services in driving domestic demand will be more apparent, said Pan. 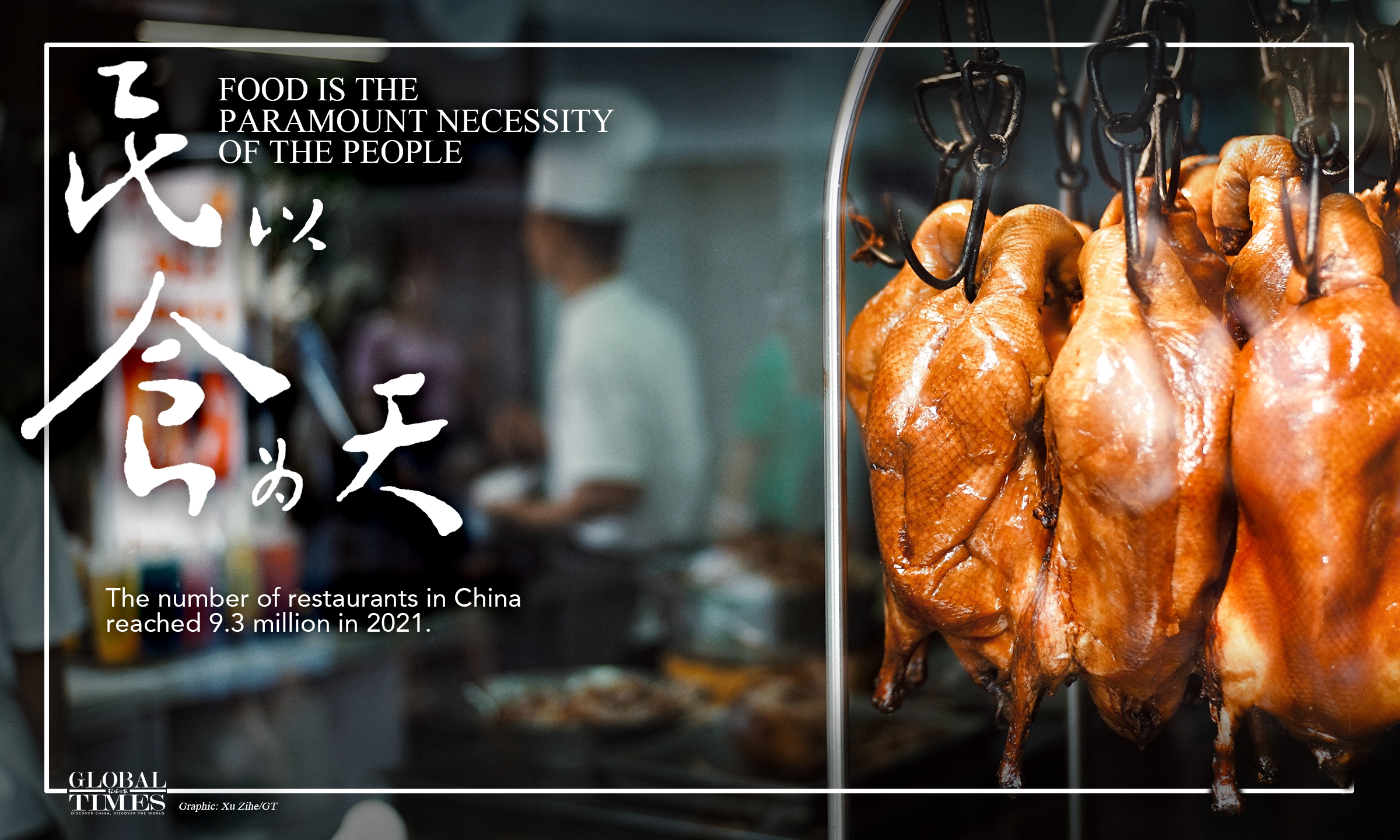 A global leader in culinary culture

Moreover, demand from gen-Zers and the middle class for diversified and high-quality food culture is also propelling China to become a “top food consuming country,” while also being the largest, most attractive market for global investors.

As gen-Z represents the next engine driving domestic consumption growth, it has also brought Haidilao, a chain of hot pot restaurants known for its fantastic services and innovative marketing methods, into the spotlight. It emerged as one of the most lucrative hot pot enterprises in China as the company claims to have witnessed 43.7 percent growth to make 41.11 billion yuan in revenue in 2021. So far, the number of registered Haidilao diners has exceeded 100 million.

The national per capita consumption expenditure was 24,100 yuan, up by 13.6 percent over that of the previous year, with spending on food and beverage industry services such as food, tobacco, and liquor representing 29.8 percent of total composition in 2021. The contribution to the final consumption expenditure to GDP growth rate went up by 5.3 percentage points, according to the Statistical Communiqué of China on the 2021 National Economic and Social Development published by the National Bureau of Statistics. 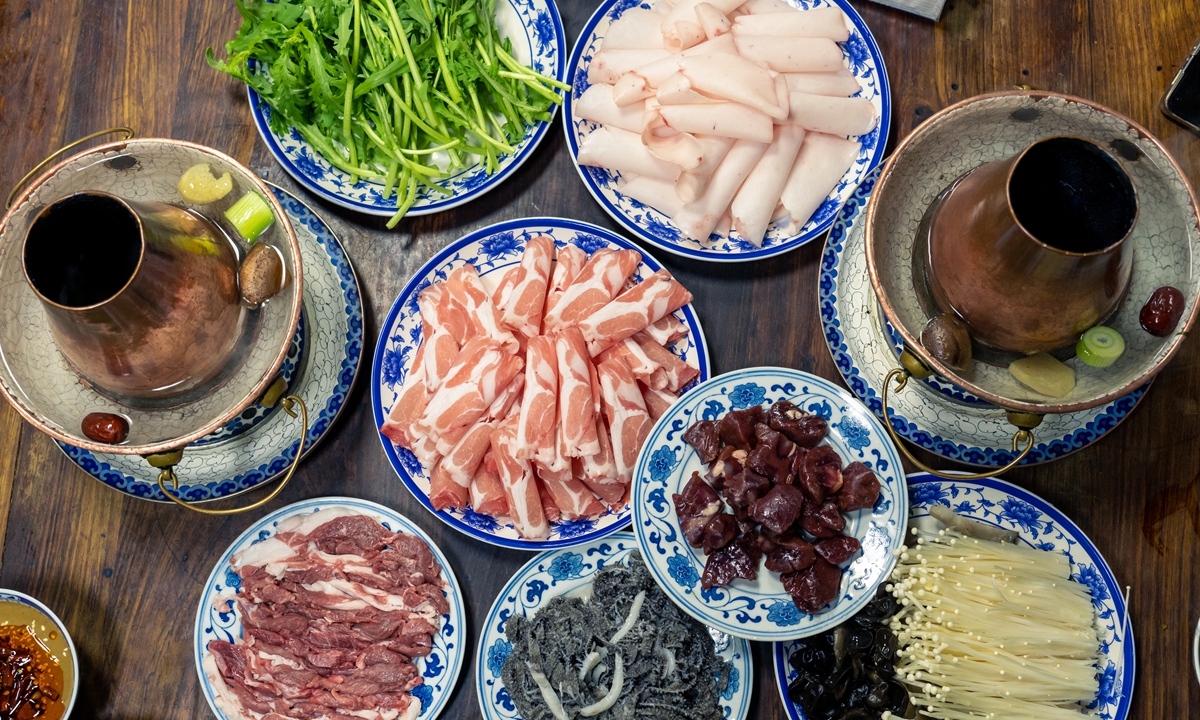 People’s demand for food is closely related to demographics and their income levels, Liu of CASS told the Global Times. “Generally speaking, people living in megacities pay more attention to catering services. In pursuit of cuisine, Shanghai residents have an outstanding taste in food. They prefer light, pocket-sized, high-end food,” Liu said. “Such exacting standards and requirements for food and beverage are reflections of social and economic development and the pursuit of a more civilized lifestyle.”

The consumption capability of Shanghai has seen rapid growth year-on-year, with its expenditures per capita up 14.91 percent from 2020, and the city also represents the highest personal disposable income in China, which was registered at 78,027 yuan in 2021, an increase of 8.02 percent yearly.

With the growth of the national economy, the pursuit of health and a more cultured life has grown. While China takes gastronomy as a key tool to drive its economy, it also calls for the “clear your plate campaign” amid the promotion of a civilized, healthy, and high-quality eating culture, Liu noted.

Homi Kharas and Meagan Dooley, senior analysts at the Brookings Institution, said that China’s GDP contributed 18 percent to the global total, while the country’s consumption capability accounted for above 60 percent of the world’s total.

China is the largest gourmet country in the world, with the most rapid growth in the food consumption market. China’s megacities are witnessing a stronger food economy than their counterparts in the rest of the world, with more innovative ways to build world-renowned food capitals in the future underway, said Mei. 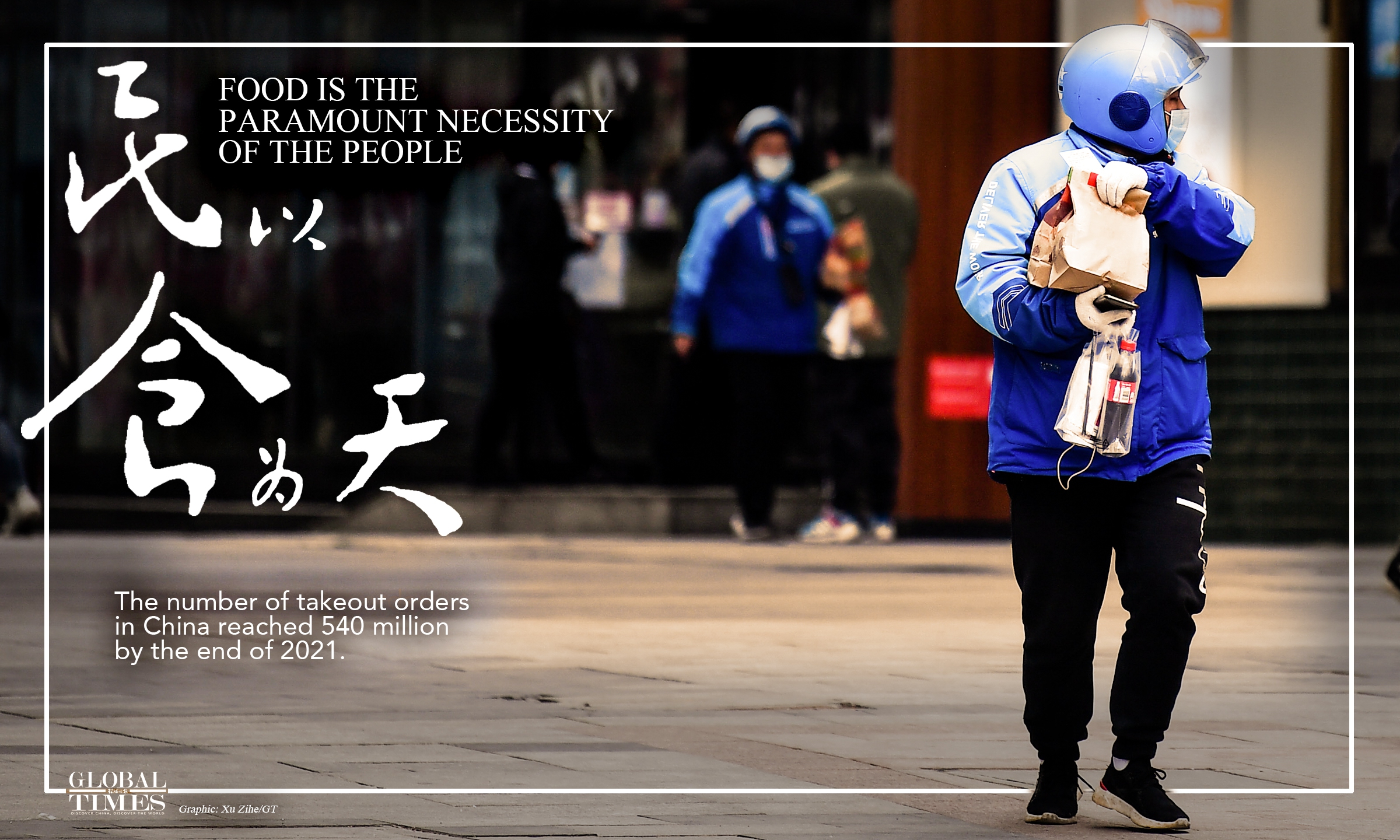