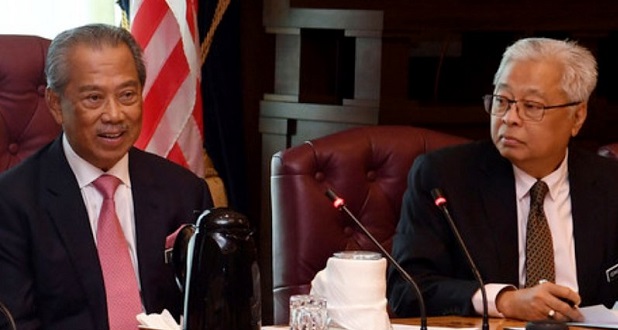 MUHYIDDIN Yassin has denied a claim that he had enough support from federal lawmakers to be reappointed prime minister.
In a statement, the Pagoh MP said he had never mentioned he had the full support from lawmakers to take over the federal government from Ismail Sabri Yaakob.“A few days ago, it was said that I had told a leader of a party that I have the numbers to become the PM again.

“I would like to clarify that I have never informed anyone or confirmed it to anybody that I have the numbers. The allegation is untrue,” said Muhyiddin.

Last week, Mohd Shafie Apdal claimed that Muhyiddin had called him two months ago to get his backing to become prime minister again.

The Warisan president said Muhyiddin had told him he had the backing of 119 MPs in the 222-member Dewan Rakyat.

Shafie claimed Muhyiddin had further said he had discussed the matter with PKR president Anwar Ibrahim, who was agreeable to supporting Muhyiddin.

Speaking further, Muhyiddin admitted to having met several party leaders but said the meeting was only to discuss a possible electoral pact for the next general election.

He said the proposed electoral pact must be based on a common agenda to ensure that Malaysia does not return to the rule of the “kleptocrats currently controlling Barisan Nasional parties”.

“I believe a majority of the people reject kleptocracy, and efforts must be made to stop BN from fully returning to power in this country,” he said.

“The pact must be based on a common agenda to ensure Malaysia does not fall back into the hands of kleptocrats who currently control BN.

“I believe the majority of the public reject kleptocracy and an effort must be made to stop the BN from recapturing power,” he said in the statement.

He said the proposal, discussed with opposition leaders, was the best way to go up against BN.

“The discussion was only on ways to find a common understanding on how to defeat BN in the general election.

“Based on my meetings with the leaders, we are in agreement that the best way to defeat BN is through a straight fight.

“This is because BN’s win in Malacca and Johor was due to split votes. BN didn’t get the support from the majority of the people nor did they receive an increase in terms of votes,” said Muhyiddin.

Muhyiddin was prime minister from March 2020 to August last year but quit following a loss of majority in Parliament, after Umno MPs aligned with their president Ahmad Zahid Hamidi and former prime minister Najib Razak withdrew their support.