Have you noticed the size of fried chicken at Kentucky Fried Chicken is smaller than usual? That’s because the chicken shortage has forced the poor birds to be slaughtered earlier in order to meet the local demand. Yes, Malaysia is currently facing the food crisis, and chicken is the latest candidate of food shortage that plagues the country, forcing PM Ismail Sabri to act.

The prime minister announced on Monday (May 23) after a Cabinet meeting that effective June 1, the country will stop the export of 3.6 million whole chickens a month until production and prices stabilise. At the same time, more overseas abattoirs will be recognised to boost the country’s chicken supply. PM Ismail also said the government would look into creating a buffer stock of chicken.

The latest move was taken after the government decided in the last Cabinet meeting (May 18) to scrap – temporarily – the AP (“approved permit”) requirement to import food into the country, affecting round cabbage, old coconut seeds, chicken (chicken cuttings and round chicken) and milk. However, the Agriculture and Food Industry Ministry says importers must still have an IP (import permit).

In other words, after a week the “approved permit (AP)” was cancelled, hawkers were still facing problems getting chickens for their businesses. Actually, as government-controlled news media celebrated the abolishment of AP, little was reported that “only four” specific types of agro-food commodities are no longer subject to AP. Other food items such as rice still requires AP. 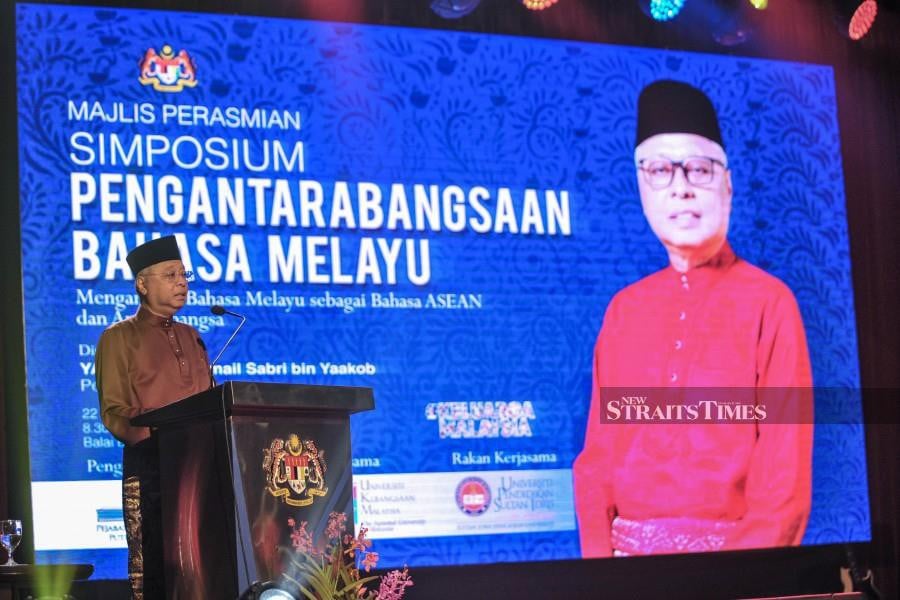 This means the government is merely fire-fighting and isn’t solving the long-term problem of food security. To make matters worse, the prime minister admits the existence of “cartels” that control the price and production of chicken among large companies. The cartels basically refer to middlemen who manipulate supply and prices in order to profiteering.

So, on top of IP (import permit) you have AP (approved permit), and on top of AP you have Cartel. While it’s understandable that IP is needed for the purpose of biosecurity control at the country’s entry points, exactly why do you need AP, which breeds cartels? The AP is nothing but another layer of profiteering specifically created by the government to enrich cronies.

But the UMNO-led Barisan Nasional government was not done with sucking people’s hard-earned money with AP, which normally awarded to big guns or elite cronies. Little Napoleons of government agencies would conspire among themselves to get a slice of the profit for themselves – the “Cartels”. The government knew about the cartels, but chooses to close one eye for decades.

Basically, while the IP allows the government to earn taxes from imports, the AP helps politicians’ families and friends to earn billions from just a piece of paper. The food price is further inflated with the cartels, who work hand-in-glove with government officials, just like how the underground “meat cartel” distributes fake halal beef and passed off the horse and kangaroo meat as beef to Malaysian Muslims for the last 40 years.

Blaming the U.S. interest rate hike and Russian invasion of Ukraine for the current food shortages are just lame and lazy for the self-inflicted food crisis. In truth, chicken shortage or price hikes happen every year – without fail – especially during festive season like Chinese New Year or Hari Raya festivals, despite the fact that the country is a chicken exporter.

Who do you think deliberately squeezes the supply of chicken during the annual festivals to create an artificial shortage, leading to price increases? It was like Saudi Arabia facing a shortage of gasoline or New Zealand ran out of dairy products, which will never happen. Chicken is just the latest casualty. Previously, the country faced a shortage of vegetables, despite exporting it to Singapore.

Heck, there were also shortages of essentials such as cooking oil, sugar and rice in the past. It’s both shameful and deplorable that a country that produces vegetables, palm oil, sugar and rice could not guarantee food security for its population of just 33 million. The entire population would have been starved to death if the current UMNO government is put in charge of China’s 1.4 billion people.

But quantity of food isn’t the only problem plaguing this country. The “quality” of food has also been consistently deteriorating. For example, when was the last time you saw “Washington Apples” being displayed in supermarkets like AEON? When the fruit became too expensive due to weak purchasing power of Ringgit, it was replaced by the more affordable Fuji Apples – from China.

Now, even the Fuji Apples have become a premium product. Pasar malam (night market), which used to sell Fuji apples, has been reduced to selling smaller-size apples of unknown origins. This means the people are being fed with leftover or inferior food products. Top quality chicken, pork, vegetables, “Musang King” durian, mangosteen and whatnot are exported overseas like Singapore and China.

On the surface, it seems like a good idea that current UMNO government has banned the export of 3.6 million chickens. But it would not have had happened if the government did not practice corruption, cronyism, nepotism, racism and discrimination. The ban will definitely reduce the country’s earnings, indirectly affecting the value of local currency – “Ringgit”. 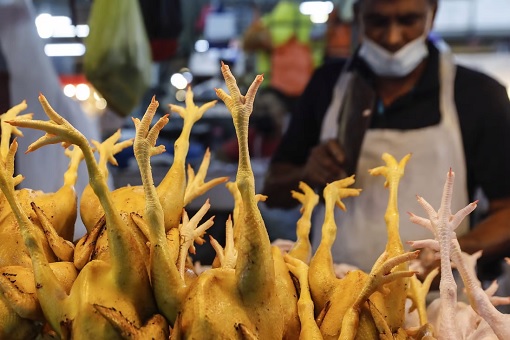 Malaysia exported more than 49 million live chickens in 2020, as well as 42.3 tonnes of chicken and duck meat. Singapore imported almost 73,000 tonnes of chicken in 2021 – more than a third of its chicken supply – from the country. Thanks to the ban, which can be avoided in the first place, Singapore has to buy from other countries like Brazil – currency exchange loss to Malaysia.

Why the chicken crisis can be avoided? Turtle-egg Sabri said he was disappointed with the actions of some companies that had stopped the supply of chicken, causing an increase in prices and a lack of supply in the market. But was it really the fault of local poultry operators alone that triggered the shortage of chicken, or was it the incompetence and inefficiency of the government itself?

The government has imposed a ceiling price of RM8.90 per kg for chickens since Feb 5. On the same date, the Agriculture and Food Industries Ministry has offered a subsidy of RM729.43 million to chicken breeders through the “Keluarga Malaysia Maximum Price Control Scheme” because Sabri administration knew the breeders could barely survived after factoring in rising production costs.

Hence, the ceiling price was imposed “before” the Ukraine war, which began in Feb 24. However, it was only after the chicken crisis exploded that the government admitted only RM50 million of subsidies of the RM729.43 million due have been paid out to breeders so far. Why did the agriculture ministry drag its feet in the subsidy payment, leading to poultry farmers halting output?

Obviously, the delay in government subsidy payouts could be due to corrupt officials in the agriculture ministry trying to “siphon” the fund elsewhere, or simply working with cartels to create a shortage. The Federation of Livestock Farmers’ Associations of Malaysia (FLFAM) has denied that breeders were deliberately holding back the supply of chickens.

If indeed the poultry farmers were guilty, the government can easily charge them under current laws, failing which is proof the clueless PM Ismail Sabri has screwed up. Still, the fact that the country’s poultry sector has easily collapsed after a handful of livestock farm decided to cease production for 2 days (May 21 and 22) speaks volumes about how fragile the food security is.

At certain markets in the Klang Valley, wholesale prices have reportedly soared to around RM13 per kg, while some stalls were said to have closed due to a lack of supply. That’s a whopping 46% more than the ceiling price of RM8.90 per kg. This begs the question whether the government actually knew how to tackle the shortage of chicken, or had been sleeping on the job till it was too late.

Yet, the clueless Economic Affairs Minister Mustapa Mohamed and Finance Minister Zafrul said the country’s inflation, which claimed to be at 2.2% in March, is under control. In fact, both incompetent ministers have self-praised the current backdoor government for doing an excellent job in keeping the inflation low. If that’s true, why PM Sabri was running around like a headless chicken during the chicken shortage?

If the chicken price could be stabilized by simply creating a buffer stock of chicken, why wasn’t it done ages ago? The shortage of chicken is not the only food crisis, and will certainly not be the last. Annually, the country spends over RM50 billion in importing basic foodstuffs such as rice (30%), beef (78%), lamb (almost 90%) and cabbage (60%). That’s a lot of foreign exchange losses.

From importing cars to exporting chickens, and from police force to dubious meat, Malaysia is the only country in the world that has a comprehensive web of approved permits and cartels to enrich cronies and elites. Worse, instead of improving food security, certain state governments would deploy thuggish method to destroy farm owners due to excessive greed.

For example, vegetable farmers in Cameron Highlands, located in the state of Pahang, are not given any chance to own farm land. Mr Kee, whose family has been toiling on for about 30 years, is the second-generation farmer who paid an annual RM2,250 (RM900 per acre) of “temporary occupation licence” (TOL) fee to the state government to grow spring onion, corn and chillies on the 1-hectar land.

The TOL needs to be renewed annually and farmers are at the mercy of politicians and middle persons who have connections to the district Land and Mines Office – they have the authority to approve or reject their applications for renewal of their TOLs. On top of that, the farmers faced issues of encroachment, land clearance and even intimidation to pay under-the-table bribes.

In March 2020, right after the return of the United Malays National Organization (UMNO) through the backdoor government of Muhyiddin Yassin, the Pahang state government introduced a new land policy. Instead of fixed TOL rate, the farming land would be leased to the development arm of the state – the Pahang State Development Corporation – and then rented to farmers at RM4,500 per acre per year.

From RM900 per acre, all the farmers now need to fork out RM4,500 per acre annually – an increase of 500% – under the new rent-seeking policy. It was already bad that land insecurity has prevented farmers from investing in new infrastructure and equipment to improve his farming technology. It has now become worse as the rise in land lease would make it even more difficult for farmers to maintain their farms. 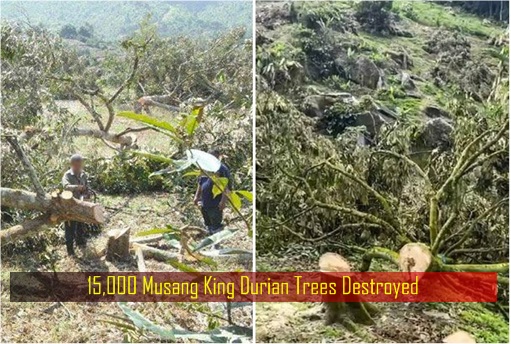 The increase in cost of farming as a result of the government’s increase of land lease price will be passed down to consumers, contributing to inflation. The same Pahang state was also responsible for the crisis of Musang King durians in 2020 when the Royal Pahang Durian Resources was formed to seize the crown jewel of durians from farmers under the pretext of evicting illegal farmers.

But when the Court of Appeal granted the durian farmers a stay against their eviction, the vengeful and shortsighted business arm of the Pahang royal family stunningly ordered the state forestry department to cut down a jaw-dropping 15,000 Musang King trees in an area measuring 101 hectares in the forest reserve – a violation of the court order.

The arrogant Pahang state government had even bragged that they managed to chop down all the trees in 9 days against the estimation 30 days, not realizing their action has cost tremendous losses to both the farmers as well as the country’s earnings. The stupid self-inflicted action has created a shortage of Musang King, leading to 100% increase in the durian prices this year.

Arguably, the chicken shortage is just the beginning of a much bigger food crisis. Ismail Sabri should spend more time worrying about the country’s food security than whining about making the Malay language (“Bahasa Melayu”) lingua franca in the region. Nobody cares about the language if they can’t even put food on the table. The prime minister will suffer the public anger if the current food crisis is allowed to escalate.