PETALING JAYA: The PKR national elections saw a dismal response with only 12.26% of its 1.1 million members coming out to vote, and party insiders have spounded the alarm that it could be headed for disaster in the next general election (GE15).

According to the document showing the final tally sighted by FMT, only 137,127 of the 1,118,423 eligible members came out to vote physically or via online. This does not include the eight divisions where fresh elections have been called after there were glitches over the weekend polls.

The tally showed good online voting response with 70,200 of the 76,932 who registered as online voters picking their choices.
However, the turnout for physical voting was very poor with only 59,056 of the 1.04 million eligible voters casting their ballots.
The turnout was the highest in Selangor divisions where PKR is leading the government, but even then, the average for the state was 13% of those eligible to vote.

“This could be one of the lowest turnouts in PKR’s election history,” a party insider told FMT. “The leaders should take it as a warning that interest in the party by even its own members is waning. No prizes for guessing what the public perception is.”

He said whether it is voter fatigue or a loss of confidence in party supremo Anwar Ibrahim and the feuding leaders, PKR should take this as a warning on how it could perform in GE15.

One candidate in Perak said some campaign styles which involved “vote buying” for a party election has also put many members off, making them question the integrity of the party which wants to reform Malaysia.

“The grassroots are shaken by the very poor turnout and are worried they may be wiped out in GE15,” he said. 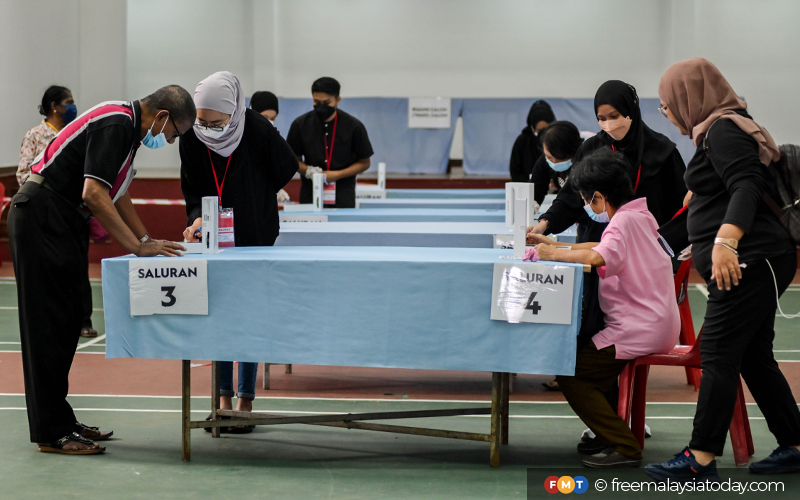 PKR election committee chief Dr Zaliha Mustafa confirmed the low turnout, saying it could be related to the many uncontested posts at all levels in all wings.

“As for the top posts, many members did not vote as they perceived it to be a friendly affair, especially for the post of deputy president,” she said.

Vice-president Tian Chua said the numbers were “not too bad”.

“We lost some key grassroots leaders, which might have contributed to lower turnout in some divisions due to lack of competition,” he told FMT.

“I think some 20% or more division heads also won without contest. Further, we were conducting party elections with short notice, and also during the festive season.”  FMT

For the good of the nation, step aside now, Anwar

It is only a matter of time now before another general election is upon us. The last few years have been tumultuous ones for the nation. People are weary of all the political infighting. The pandemic, the floods and rising prices have taken their toll on living standards. Mismanagement and incompetence have made matters worse. Many are struggling. Many have lost hope.

There is a deep longing in the body politic for political stability, sensible policies that make a meaningful difference, honest leaders and good governance. Right now, voters have three choices: a coalition of the corrupt (Barisan Nasional); a coalition of traitors and extremists (Perikatan Nasional); and a coalition that failed the people the last time around and still can’t get its act together (Pakatan Harapan). At this rate, many may not even bother to vote.

Our politics today is very much personality driven. Most people have already made up their minds about the main political personalities in the country. The general conclusion is that all these leaders are cynical, self-serving and more often than not, thoroughly corrupt. They have made a mess of things; they are not the solution they promised to be.

Looking at the trajectory we are on, Umno seems set to win though it is unlikely to obtain a strong and stable majority. It will win not because it is better but because the alternatives are unappealing.

We are all agreed that Umno’s return will have terrible consequences for the nation. For one thing, the rule of law will be seriously undermined; many of those convicted or facing trial will likely be given sweetheart deals. Our nation will also rise yet higher among the ranks of the great kleptocracies of the world. And all hope for reform would be lost. Slowly but surely, we will slip down the road towards a failed state.

Unless there is a dramatic change in the political dynamics of the nation, our future is bleak. We need to rejig the system, break out of the despair that is setting in, bring new hope, stir the imagination of the people, give them a real reason to vote. We need a new paradigm, new leaders with new vision that will irrevocably alter the political dynamics.

Regrettably, this kind of change can’t happen with you as leader of the opposition. Your time is past. Fate has been unkind to you in many ways. Dr Mahathir Mohamad did you (and all of us who supported Pakatan Harapan) a great injustice when he denied you an opportunity to serve our nation as prime minister. But your performance as leader of the opposition these past two years hasn’t helped either.

Like it or not, you are not the one to lead us into GE15. You cannot win. You cannot inspire the voters to turn out in sufficient numbers to stymie Umno’s march to Putrajaya. If you stay, the change that you yourself fought so hard for, paid such a high price for, will recede further and further into the background.

Yes, other leaders need to step aside too, but even if they did their parties and coalitions have little to offer. PKR alone has great potential because it stands for values which I believe are shared by most Malaysians. Only PKR can unite our people and infuse them with a common purpose. That’s why I believe that if change is to come to the nation, it must begin with PKR, the lynchpin of PH.

And it must begin with you making way for a new leadership team.  Make way for Rafizi Ramli and Nurul Izzah Anwar. Let them build an informal coalition of younger leaders that would include the likes of Hannah Yeoh and Syed Saddiq Syed Abdul Rahman. Together, they can forge a message of hope that will fundamentally alter the national dynamics and shake our nation up like never before. If done right, it could create a tsunami even greater than the one we witnessed in GE14.

If you make way now, even at this late stage, a new team will still have time to hammer out a new deal for Malaysia, an agenda that we all – Malay and non-Malay – can embrace, an agenda that is focused on truly helping the people, rebuilding our capacity, restoring the integrity of our national institutions, rebuilding trust between the communities. People are hungry for change; if a new generation of leaders sound the trumpet call, they will surely respond.

It all begins with you, sir. Our fate and the future of our nation is now in your hands. If you stay, you condemn us to a dismal future. But if you step down now, you will make it possible for us to dream again of building that better Malaysia that we all so desperately want.  It is the greatest act of patriotism and sacrifice that you can do for us and for our nation at this critical moment in our history. And so, for the sake of our nation, please step aside now. – THE MALAYSIAN INSIGHT