Zahid accuses secretary of using signature stamp on charity’s cheques for credit card bills; says would have fired her if he’d known

KUALA LUMPUR— Datuk Seri Ahmad Zahid Hamidi today sought in the High Court to blame his former executive secretary for the alleged misuse of Yayasan Akalbudi’s funds — where he was a trustee and later its sole signatory — for unrelated purposes such as to pay his and his wife’s credit card bills.

Testifying in his own trial over the alleged misappropriation of millions of ringgit from charitable foundation Yayasan Akalbudi, Ahmad Zahid accused Major Mazlina Mazlan @ Ramly of having misused a stamp for his signature meant for Hari Raya cards and certificates of appreciation — on Yayasan Akalbudi’s cheques for unauthorised use.

But Ahmad Zahid stressed that the signature stamp was only for certificates of appreciation and festive cards, insisting that he had never allowed Mazlina to use this signature stamp for other purposes such as for his personal cheques or Yayasan Akalbudi cheques. 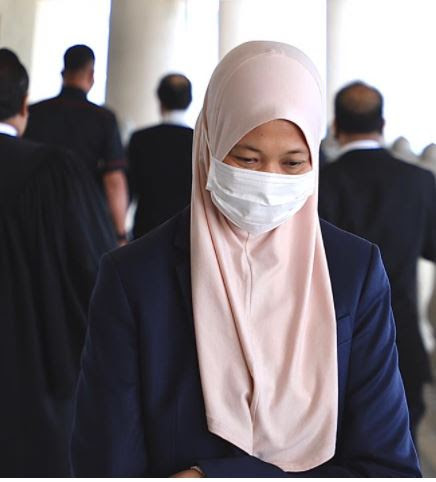 Ahmad said that the certificates of appreciation could go up to even hundreds or thousands such as for officials working at agencies under the Home Ministry or Defence Ministry which he was heading previously, noting that the signature stamp would also be used for Hari Raya cards which could go into the tens of thousands instead of him physically signing them.

“I stress that I had never given any approval, especially whether either verbally or directly or indirectly to Mazlina to use the signature chop for any other purposes besides signing invitation cards and Hari Raya cards and festive cards and certificates of appreciation,” he said.

As for cheques that he had signed ahead of time, Ahmad Zahid said he had practised this since before Mazlina became his executive secretary, and said these “presigned” cheques were specifically for urgent invoice payments by Yayasan Akalbudi to construction contractors when he is outstation or overseas.

“Because there are many developments carried out by Yayasan Akalbudi especially orphanages, mosques, suraus, maahad tahfiz and others that require Yayasan Akalbudi to contribute based on requests made, therefore payments to contractors or the recipients of contributions had to be expedited, I would not be able to sign when I’m overseas, so I signed the cheques first,” he explained.

“I did not know at all that there were cheques using the signature stamp and pre-signed cheques had been used by Mazlina from 2013 to 2016. If at any time I knew it, I would have terminated Mazlina as she had misused Yayasan Akalbudi’s cheques,” he told the High Court.

“Specifically, I had never allowed Mazlina to use the signature stamp and/or pre-signed cheques for the purposes of paying my personal credit cards and/or insurance policies of vehicles owned by me and for my supplementary cardholders,” he added.

Ahmad Zahid accused Mazlina of having been careless or “negligent” in handling his and Yayasan Akalbudi’s finances, including having used the stamp of his signature on Yayasan Akalbudi cheques to pay for his and his wife’s credit card bills allegedly without his knowledge, and for failing to understand the credit card statements and overpaying or underpaying the bills on several instances.

Other reasons why he said Mazlina was negligent was over her alleged use of his pre-signed cheques for Yayasan Akalbudi for other purposes instead of for the charitable foundation’s charity works, and allegedly failing to understand he and Yayasan Akalbudi are two separate entities.

Claiming that Mazlina had failed to show him the monthly bank statements for his bank account and Yayasan Akalbudi’s bank account, Ahmad Zahid said this also showed her alleged negligence.

Saying that he had requested Mazlina to show the monthly bank statements several times but that this was not done, Ahmad Zahid suggested that Mazlina could have taken advantage of his busy schedule as minister previously to avoid showing such documents.

“When I requested, she said she will give, and then she will go from my office to her office, I waited, she didn’t come. After that, there are other appointments and other meetings, she buat-buat (pretended) to have forgotten. Each time I asked, each time she gives me all sorts of excuses.

“My schedule is very tight, I always skip my lunch, my only break is for my solat, prayers and also to toilet. Other than that, I wish to say that my schedule is 365 (days), 24/7, and I feel guilty to my family because I don’t have much time for them.

“So with such a tight schedule, although I manage my time management, but I prioritised the ministerial duties and the nation as a priority, because of that busyness, could have caused Mazlina to take the opportunity to not fulfill my requests in showing the bank account statement or showing how much is the balance in my account and the Yayasan’s account,” he said.

In this trial, Ahmad Zahid ― who is a former home minister and currently the Umno president ― faces 47 charges, namely 12 counts of criminal breach of trust in relation to charitable foundation Yayasan Akalbudi’s funds, 27 counts of money laundering, and eight counts of bribery charges.