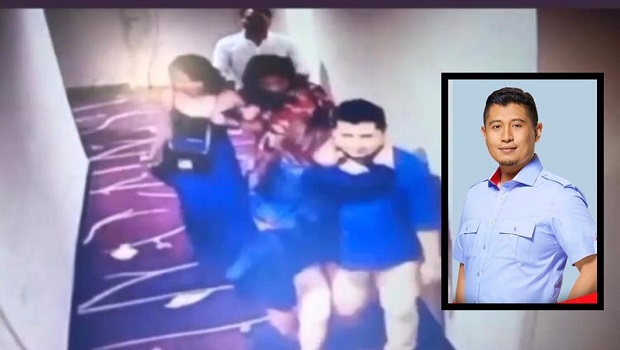 Najib Razak, whose “Malu apa bossku” (What’s the shame, my boss?) moniker has taken the country by storm, appears to have secretly married a new wife – probably without the knowledge of his existing wife, Rosmah Mansor. Apparently, a photograph of the ex-prime minister with a woman clutching his arm, together with a group of youngsters in what looked like a family photo, has gone viral.

The photo, initially thought to be a fake in an attempt to spread naughty rumours about Najib, could be genuine after all. All it took to confirm the authentication of the photo was not a forensic analysis by the FBI or CIA, but rather the reaction from Najib himself. Contrary to his usual arrogance and habit to lie, this time he simply declined to comment when grilled about the “wedding photo”.

A self-proclaimed “King of Trolls”, Najib could easily laugh and rubbish the secret wedding. But he didn’t and instead chose to evade the questions whether he had married another wife. Muslim men can have up to four wives, hence it is perfectly legal for the “billionaire Najib” to marry a younger woman to satisfy his lust. Very few would blame him for practicing polygamy. 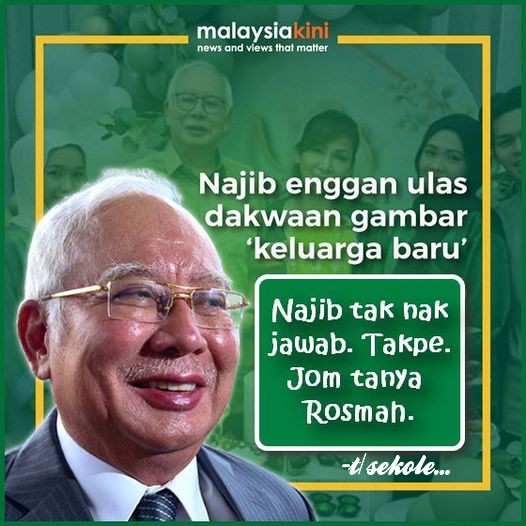 However, social media saw many people ridiculed and mocked the man who did not feel ashamed at all after stealing billions of dollars from 1Malaysia Development Bhd (1MDB) sovereign funds, but is too shy to even admit that he has a new wife. Some even offered a cheeky suggestion, telling the crook that he could easily say the new wife was a “donation” from the Saudi royal family.

The U.S.-DOJ investigation results says that over US$4.5 billion was misappropriated from the 1MDB fund, with some of the money used to finance Hollywood films, and buy hotels, private jet, luxury Equanimity super yacht, Picasso paintings, jewellery and real estate. Najib has claimed RM2.6 billion found in his private bank was “donation” from Saudi Arabia royal family, a claim that could not be proven.

The lucky woman in the photograph has been identified as Hashimah Ramli (Shima), former wife of composer Fauzi Marzuki. Mr. Fauzi and Hashimah were married back in 1993, when she was a singer, but divorced in 2013. The 53-year-old Shima is believed to have married Najib Razak more than a year ago, reportedly in 2019. It seems Najib has a peculiar fetish for divorcees. 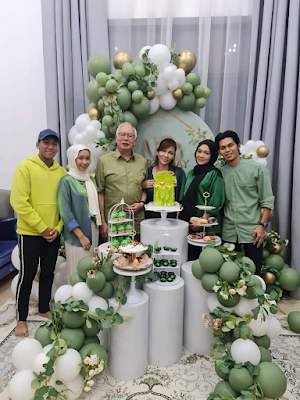 Rosmah, second wife of Najib, was also a divorcee who formerly married to Abdul Aziz Nong Chik. They have two children, Riza Aziz and Azrene Soraya. In 1987, she married Najib Razak and they have two children, Nooryana Najwa and Mohd Norashman. The family, living a lavish lifestyle, has amassed a huge amount of wealth, which Rosmah claimed to have saved since childhood.

Prior to marrying Rosmah, Najib had married Puteri Zainah Eskandar in 1976 when he was just 23 years old. His first wife was said to be linked to the Sultanate of Kelantan. They were blessed with three children – Mohd Nizar, Puteri Norlisa and Mohd Nazifuddin. Legend has it that Rosmah had been on a constant hunt for rich and powerful man to climb the social ladder to be one of the elites.

On July 3, 2018, after stunningly lost the 2018 General Election, Najib was arrested by the Malaysian Anti-Corruption Commission (MACC). On July 28, 2020, he was convicted by the High Court on all seven counts of abuse of power, money laundering and criminal breach of trust – becoming the first Prime Minister of Malaysia to be convicted of corruption, and was sentenced to 12 years’ imprisonment and fined RM210 million.

He remains free on appeal till today. Despite the conviction, Najib remains the most powerful and influential leader within his party – United Malays National Organization (UMNO). UMNO has been increasing efforts to free him, including the prospect of a royal pardon to allow him to escape not only prison, but also a return to the corridors of power as the prime minister again.

A photo of the convicted criminal invited to the Palace for a special dinner during Ramadan on April 18 has raised eyebrows over a royal pardon to be granted by the King Sultan Abdullah, who is known for his close relationship with Najib. Not only Najib was invited to dine and wine with the Agong (King), the crook was seated at the high table alongside PM Ismail Sabri, who in turn seated next to the monarch.

The secret marriage of 53-year-old Shima to 68-year-old Najib could be deliberately carried out in part to rebuild Najib’s toxic image. If Najib were to return as premier once again, he cannot be seen together with Rosmah in the public. While gullible Malay voters could forgive and forget Najib’s corruption in 1MDB scandal, they have difficulties accepting his infamous wife Rosmah. 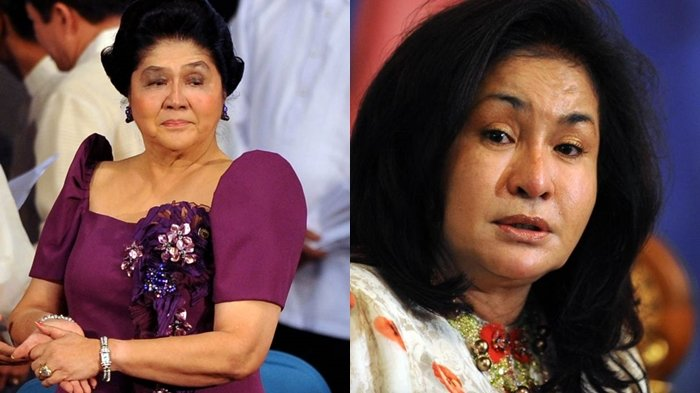 Rosmah is facing corruption trial over the role she allegedly had played in securing a RM1.25 billion (US$300 million) project to supply electricity to rural schools in Sarawak. She was charged with soliciting RM187.5 million (US$45 million) from contractor Jepak Holdings in 2016 and 2017 as kickbacks for securing the Sarawak schools project involving 369 rural schools in the Borneo state.

The project involved installation of solar hybrid systems and for the maintenance and operation of diesel generators for the schools. Rosmah initially wanted RM200 million kickbacks (17% of the project value) under the pretext of a “political donation”. The rate was reduced to 15% (RM187.5 million). In January 2017, Najib personally oversaw the contract awarded to Jepak Holdings.

Should the country head to the polls this year, opposition as well as a faction within his own party UMNO not aligned to him could use Rosmah Mansor – Najib’s Achilles’ heel – to undermine him. The Malays still remember how the power-crazy Rosmah established her own division – FLOM (First Lady of Malaysia) – in the prime minister’s department after Najib became prime minister in 2009.

Crucially, people who dislike Rosmah’s obsession of comparing herself to the wife of the U.S. president are still disgusted over not only her extravagant lifestyle and penchant for showing off her Hermes Birkin handbags collection and diamond rings, but also her role in active politics. As the de-facto prime minister, even former Singapore Minister Mentor Lee Kuan Yew had to visit her in 2009.

On the night of May 17, 2018, police raided three luxury Pavilion Residences condominiums in Kuala Lumpur owned by Najib Razak’s children. Besides RM117 million cash and RM1 billion worth of 12,000 pieces of jewellery, an eye-popping 567 handbags consisted of luxury handbags from 37 different designers – including Chanel, Prada, Hermes and ultra-luxury Bijan – were confiscated.

To maintain her “attractiveness”, one report said Rosmah once spent US$400,000 on anti-ageing products including almost 1,600 bottles of growth hormone capsules. But if there’s one thing that turned even Malaysian women against her, it has to be her “griefing” of how it costs RM1,200 (US$270) to make house calls to dye her bouffant mane black in 2015.

Known as the Imelda Marcos of Malaysia, the suspicion that Rosmah had been using stolen money to fund her jewellery spree was finally proven during the trial involving ex-Goldman banker Roger Ng Chong Hwa in a federal court in Brooklyn, New York. The trial of Mr Ng, a Malaysian, has opened a can of worms which was damaging to both Najib and his wife.

For example, Najib can no longer claim that the US$681 million was donations from Saudi royal family. In the trial against Ng, the FBI (Federal Bureau of Investigation) has testified in the court that not only Jho Low had stolen US$1.42 billion (RM6 billion), Najib Razak similarly stole US$756 million (RM3.2 billion) while his stepson, Riza Aziz, pocketed US$238 million (RM1 billion).

And for the first time since Najib hoodwinked 4-million gullible Malay voters, the American jury finally got a look at “hard proof” of the treasure bought with the so-called US$620 million that Najib claimed to have returned. Part of the stolen money was used to buy a 22-carat pink diamond necklace worth a staggering US$23 million (RM97 million) for Najib’s wife – Rosmah Mansor.

The icing on the cake was a secretly taped 5-minute conversation between her and Najib in 2016, where she berated her husband for not taking control of the investigation into 1MDB. In the tape conversation which suggests she had more power over her husband, Rosmah said – “Apa cerita? (What’s up?) Can I advise you on something? I don’t like this. Darling, you are the prime minister. You lead.”

Since her husband’s humiliating defeat in 2018, Rosmah has reluctantly maintained a low profile, hoping that people would forget her incredibly toxic image as the former FLOM. But Najib is running out of time. He might get a royal pardon, thanks to the reputation of his father, second PM Abdul Razak, in addition to the fact that the monarch and the corrupt UMNO have always been scratching each other’s back.

However, it would be too obvious if Rosmah is also granted a royal pardon if she is convicted. Can you imagine PM Najib runs the show alone because his spouse is serving a jail sentence, or the return of Najib-Rosmah team after both crooks are pardoned by the Malay King? Even if PM Ismail Sabri interferes to ensure Rosmah does not spend a second in jail, Auntie Rosie is still too toxic.

Mr Najib knows this. He has to distance himself from Rosmah. Since 2018, it’s increasingly difficult to see the couple together. Najib’s highly-paid social media spin doctor and cyber troopers have received specific instruction not to mention their boss’ wife. In fact, there are persistent rumours that they are no longer living together. There are even half-baked stories that Najib was manipulated by Rosmah.

Yes, to cleanse Najib Razak, the PR team is tasked to create a comical narrative that the former premier had not only been conned or scammed by Najib’s partner-in-crime Jho Low in the 1MDB scandal, but Najib too had suffered under Rosmah’s heavy influence so much so that the Malaysian leader could not do anything about his wife’s extravagant lifestyle.

While Najib can solve the problem by divorcing his wife, the move will be too humiliating to Rosmah and the children. Knowing what a dominant and control freak Rosmah is, the last thing Najib wants is to poke the hippo the wrong way. Mahathir, once the mentor of Najib, had previously warned his protégé that he has to divorce Rosmah if he wants a smooth sailing as the prime minister.

Najib, who is obsessed with the lifestyle of U.S. presidents, knew that like most Americans who love a love story, his marriage with a new younger wife could give him a new hope. Between a 70-year-old Rosmah and a 53-year-old Shima, the choice isn’t hard. And thanks to being a Muslim, he does not have to divorce Rosmah in order to marry Shima. He can have them both (with two more free slots).

However, the fact that Najib had brought Rosmah along to the Palace for a special dinner during Ramadan on April 18, where both Rosmah and the Queen were sharing jokes and hugged each other, goes to show that Shima can yet to be displayed on public gallery. Crooked Najib might think he was a master politician, but it’s not over until the fat lady sings.