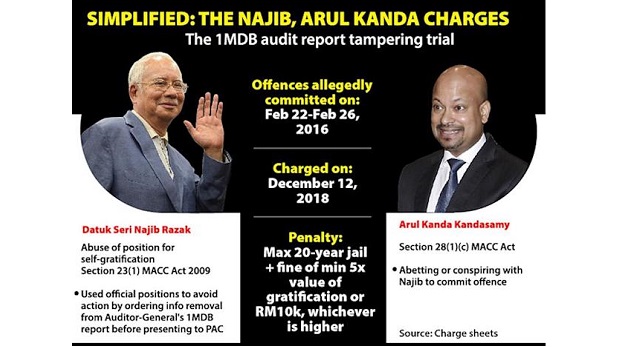 Previously, on Nov 18, 2019, the prosecution informed the court that they intend to call Arul Kanda.

“This accused (Arul Kanda) has info in relation to transactions with the other accused (Najib), which will materially affect the outcome of the prosecution of that accused (Najib).

“He (Arul Kanda) has information in his possession relevant to the charge against the other accused (Najib) in relation to the meeting held in February (24, 2016), events that preceded it, and events that followed that meeting,” Sri Ram said.

The Feb 24 meeting was when the alleged decision to amend the 1MDB audit report was made.

The ad hoc DPP added that the application was made under Section 63 of the MACC Act 2009.

Section 63 (1) states that “Whenever two or more persons are charged with an offence under this Act, the court may, on an application in writing by the Public Prosecutor, require one or more of them to give evidence as a witness, or witnesses for the prosecution”.

Subsection (3) of the provision also states that such a co-accused, who is required to testify, is entitled to indemnity (compensation for harm or loss) under the seal of the court.

When Zaini asked Arul Kanda’s lead defence counsel N Sivananthan whether they had any objections against the application, the lawyer said they would leave it to the court.

However, Najib’s lead defence counsel Muhammad Shafee Abdullah indicated they would object to the application.

The lawyer contended that the application raises problems involving the Federal Constitution.

“When you make this application, you must satisfy the court whether the court is happy or not based on its total discretion.

“This application is the first one in modern times, including the issue of constitutional nature,” Shafee contended.

Zaini then directed the prosecution to file their written submissions by next Monday (May 23) and for Najib’s legal team to file theirs by next Friday (May 27).

The judge also set May 30 to hear the parties’ submissions on the merits of calling Arul Kanda to testify against Najib.

According to a copy of the written application revealed to the media today, the document dated April 14 was signed by Attorney-General Idrus Harun.

“I, Tan Sri Idrus bin Harun, the Public Prosecutor, hereby apply to this Honorable Court to require Arul Kanda a/l Kandasamy, the accused in Criminal Trial No WA-45-11-04/2019, to give evidence as a witness for the prosecution in the abovementioned criminal trial,” the document stated.

Najib is charged with using his position to order amendments to 1MDB’s final audit report before it was presented to the Public Accounts Committee (PAC) to prevent any action against him.

Co-accused Arul Kanda was charged with abetting Najib in making the amendments.

The charges are framed under Section 23 (1) of the MACC Act 2009, which specifies a jail term of up to 20 years and a fine of no less than five times the amount of gratification or RM10,000, whichever is higher.

The prosecution is contending that a decision to make the amendments was taken during a meeting on Feb 24, 2016, at the office of then chief secretary to the government Ali Hamsa.

It was alleged this was done to remove or alter certain portions of the 1MDB audit report, including dropping the issue of wanted fugitive Low Taek Jho’s (Jho Low) attendance at the fund’s board meetings.

Another issue that was allegedly dropped from the 1MDB audit report was the two conflicting 2014 financial statements of the sovereign wealth fund.

THE prosecution in the 1Malaysia Development Bhd (1MDB) audit report case seeks to call Arul Kanda Kandasamy as a witness to testify against his co-accused in the trial, Najib Razak, at the High Court in Kuala Lumpur today.
Senior deputy public prosecutor Gopal Sri Ram made the application before judge Mohamed Zaini Mazlan under section 63 of the Malaysian Anti-Corruption Commission (MACC) Act 2009.

The section states that in a situation where two or more people are charged with an offence under the same law, the court may require one or more of them to give evidence as witnesses for the prosecution if a written application is made by the public prosecutor.

Arul Kanda may have information related to transactions with Najib that may affect the outcome of the prosecution of the latter, said Sri Ram.

“He (Arul Kanda) has information in his possession relevant to the charge against the other accused (Najib) in relation to a particular meeting held in February 2016, and the events that followed that meeting.”

Arul Kanda, who was 1MDB CEO, and former prime minister Najib were sitting in the dock.

Najib’s lead counsel, Muhammad Shafee Abdullah, said though the application has been formally made to the court, the prosecution still has to meet the requirements of the law.

“They can make this application. There are provisions governing the conduct, and there are cases and provisions that will support that (the application).

“It is Yang Arif’s total discretion, guided by law and so on. They (the prosecution) have to satisfy the court whether it (the application) is within the ambit of section 63 of the MACC Act.

“It is an unusual application. In fact, in modern times, it is probably the first time. I immediately see issues on this application, including issues constitutional in nature.” 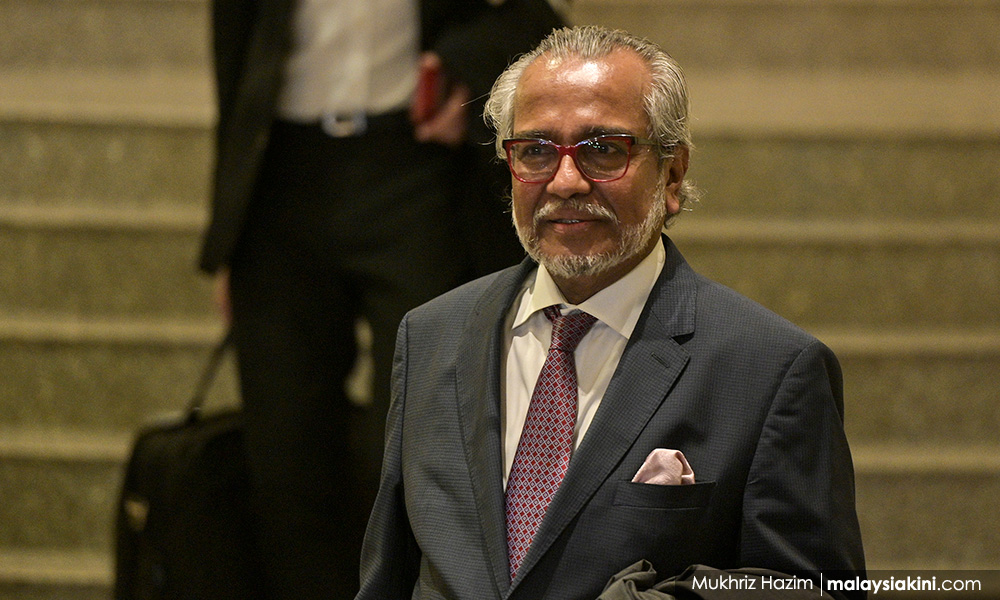 Arul Kanda’s lawyer, N. Sivananthan, said he will not be making any submission and will leave the matter to the discretion of the court.

The prosecution, in its opening statement dated October 18, 2019, said it is duty bound to inform the court that at the appropriate stage, the public prosecutor will apply in writing under to call the accused (Arul Kanda) to give evidence on the prosecution’s behalf.

After hearing oral submissions, Zaini directed both parties to put in their written submissions and fixed the application hearing on May 30.

The offence was allegedly committed at the Prime Minister’s Department Complex in Putrajaya between February 22 and 26, 2016.

Both are charged under section 23 (1) of the MACC Act 2009, which provides for a jail term of up to 20 years and a fine of no less than five times the amount of gratification or RM10,000, whichever is higher, upon conviction. – Bernama