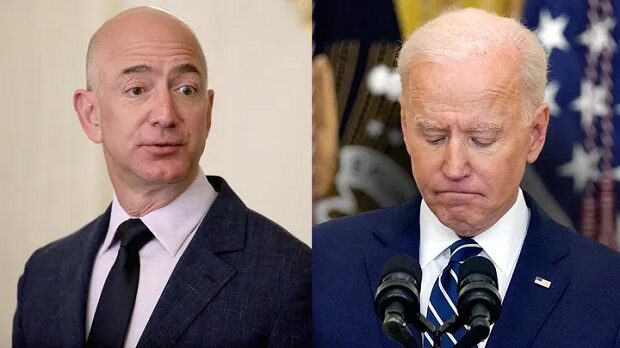 Townhall editor Katie Pavlich and Washington Times Opinion editor Charles Hurt discusses Biden blaming Putin, Pandemic, GOP, and everyone else for inflation but himself on ‘WSJ at Large.’

Former Amazon CEO Jeff Bezos believes President Joe Biden should be subject to his own newly devised Disinformation Board after he shared a tweet that seemed to conflate inflation and corporate taxation.

On Friday, Bezos shared the president’s objectionable tweet, which he labeled “misdirection,” and plainly called for it to be fact-checked.

“The newly created Disinformation Board should review this tweet, or maybe they need to form a new Non-Sequitur Board instead,” Bezos tweeted in response, claiming the two issues lacked correlation or causation.

“Raising corp taxes is fine to discuss. Taming inflation is critical to discuss. Mushing them together is just misdirection,” he added.

In Biden’s initial tweet, he asked how one could “bring down inflation” and stated the answer was taxing the “wealthiest corporations” more or forcing them to “pay their fair share.”

Biden announced the Department of Homeland Security’s new Disinformation Governance Board, which was created to combat disinformation in online social media posts, earlier this month.

The White House described the board as “nonpartisan” and “apolitical,” but it has since been widely criticized, including knocks from FCC Commissioner Brendan Carr, who described it as “Orwellian” and “unconstitutional.”

Republican officials have also criticized the board and have announced a multi-state lawsuit against the DHS and the “un-American” board.

Biden’s remark came amid a series of tweets that seemed to try to pin the record inflation witnessed under his administration on former President Trump, Republicans, and corporations.

Republicans in Congress are so deeply committed to protecting big corporations that they would rather raise taxes on working American families.pic.twitter.com/1Z0v3YTNyC

In April, inflation in the U.S. surged 8.3 percent from a year ago, nearing a decades-long record high, the Labor Department announced.

On Wednesday, the Labor Department said the consumer price index, a widely-accepted measure of the price for everyday goods, rose 8.3 percent in April from a year ago. The gain was barely below the 8.5 percent year-over-year spike recorded in March.

“Inflation is much too high, and we understand the hardship it is causing, and we are moving expeditiously to bring it back down,” Federal Reserve Chairman Jerome Powell said last week.

Bezos has increasingly used Twitter as his billionaire rival Elon Musk seeks its ownership, per a $43 billion acquisition that has yet to be finalized.