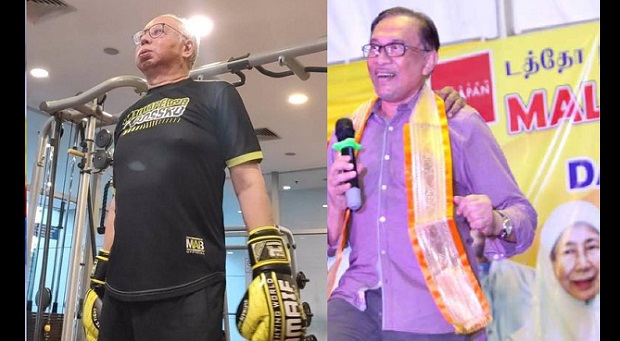 Ready, see you in the ‘ring’, Najib teases Anwar

In a brief and cheeky Facebook post, Najib, clad in a “malu apa bossku” T-shirt and boxing gloves, was also seen working out at a gym.

Sapura’s annual report ending Jan 31 announced an RM8.9bil loss and its earnings had dropped to RM450mil this year, and this has brought about divided opinions by politicians.

The initial argument started between Najib and PKR’s Rafizi Ramli, with the former premier calling for a bailout and the former Pandan MP being against it.

Rafizi later challenged Najib to a debate on Sapura and the Pekan MP said he would join if the debate also involved PKR’s number one – Anwar.

Anwar later agreed to a debate, which will be held at 9pm at the Malaysia Tourism Centre (Matic) in Kuala Lumpur today.

The Najib – Anwar debate will feature three segments, starting with whether Sapura energy Bhd would need a bailout, followed by a debate on the future and direction of Malaysia’s economy, politics and governance.

The final session will be a question and answer session from those at Matic.