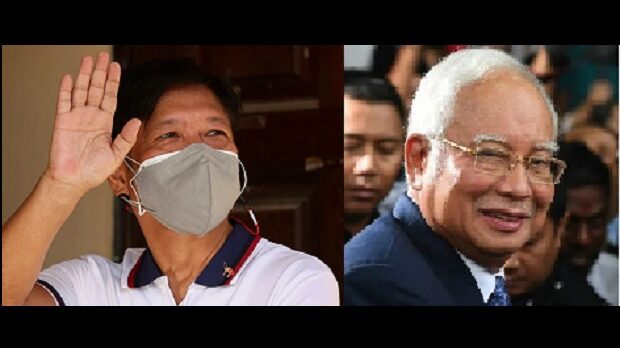 Similarities between Najib and Marcos

Can Najib Razak become prime minister again? Well, the son of the super corrupt dictator Ferdinand Marcos on Monday won the elections to become president of the Philippines. So, maybe Najib can pull off a similar stunt too.

“Only in the Philippines could a leader like Ferdinand Marcos, who pillaged his country for over 20 years, still be considered for a national burial… (and for) his wife and children (to be) allowed to return and engage in politics,” Lee Kwan Yew wrote in his book, ‘From Third World to First’ (2000).

Is Malaysia also a country that tolerates, indeed respects, those who are corrupt and powerful? Here is how both the Marcos family and Najib are rather similar:

Ferdinand and Imelda Marcos fled to Hawaii on American planes in February 1986, as millions protested in the streets of Manila. They brought along a stash of gold, jewellery and 22 crates of cash.

In their haste to run, they left behind artworks, designer clothes and Imelda’s infamous 1,200 pairs of shoes. It was an obscene amount of wealth for a country where 60 percent of Filipinos lived in poverty.

How about Najib and his wife, Rosmah Mansor? After their fall from power in 2018, police raided their properties and seized 12,000 pieces of jewellery, 284 handbags, 423 watches, 234 sunglasses and cash in 26 currencies – all worth up to RM1.1 billion (the Bijan bags alone were worth an average of RM1.6 million each!).

And yet, half of Malaysians earn less than RM2,062 per month. How could they ever support a couple clearly living beyond their means?

The jewellery and shoes were just small potatoes for Ferdinand and Imelda. In total, they are estimated to have plundered US$10 billion from the Filipino people. So how could they now elect his son (Ferdinand junior, better known as “Bongbong”) as president?

Did he kneel down and beg forgiveness from the public for his father’s sins? Not at all.

Instead, according to the BBC, for the past 10 years, he and his team have been pushing out a carefully crafted social media campaign to “rebrand the old Marcos era, not as the period of martial law with its terrible human rights abuses, corruption and near-economic collapse, but as a golden age of crime-free prosperity.”

The BBC report said that hundreds of “deceptively-edited videos” were posted on YouTube and Facebook and these have “persuaded millions of Filipinos that the vilification of the Marcoses after their downfall was unfair, that the stories of unrivalled greed were untrue.”

What about Najib? Well, he also launched a clever social media campaign and rebranded himself as “Malu Apa Bossku”. And his people keep insisting that the corruption charges against him (and Umno’s infamous “court cluster”) are unfounded and “politically motivated”. Even worse, the judge who found Najib guilty of corruption is now facing “pressure”.

Bongbong played similar word games when he launched his presidential campaign, declaring, “If my father was allowed to pursue his plans, I believe that we would be like Singapore now.”

No, we didn’t steal, claimed the junior Marcos in a 2015 interview. Instead, he claimed that his father discovered the fabled “Yamashita treasure” – a haul of gold supposedly buried by retreating Japanese troops in 1945.

This “legend” has been pushed by some Facebook pages linked to the Marcos family, claiming they will “share” their wealth with Filipinos if they return to power. Some voters actually believe this.

In 2015, when stories were going around about Najib’s lavish travel and shopping sprees, his office tried to claim that this was partly funded by his “legacy family assets.” Fortunately, Najib’s four brothers retorted that such claims were an insult to their father, Abdul Razak Hussein, who was known for his honesty and thriftiness with government funds.

We may ask why Filipinos or Malaysians choose to believe such twisted social media stories. Is it just because they live, eat and sleep with Facebook and are too lazy to investigate further?

As in Malaysia, race and language also play a part in the Philippines. Bongbong’s support doubled when he made an alliance with outgoing President Rodrigo Duterte’s daughter, bringing in support from the central and southern Philippines, which is more Cebuano rather than the Tagalog of the north.

But the most important factor is the widespread public disappointment with the failure of various Filipino leaders after 1986 to really change the lives of poorer Filipinos, thus allowing Bongbong to successfully portray himself as “the candidate for change”.

For example, Corazon Aquino, who became president after Marcos senior fled the country, came from a wealthy landowning family herself. Filipino lawmakers in Congress came from similar backgrounds, and they all failed to do serious land reform to fix the country’s biggest problem – 20 percent of the population owned 80 percent of the land, and most of the poor were landless labourers.

In Malaysia, one factor driving the “meltdown of Pakatan Harapan” was the pulling back of aid to the poor, especially Malay fishermen, rubber tappers and urban low-cost flat dwellers, thus leading to disillusionment with the new government, as Parti Sosialis Malaysia chairperson Dr Jeyakumar Devaraj explained.

Some Harapan leaders were too eager to rush towards “meritocracy” and “business-friendly policies”. Others felt the “lazy Malay” had been “spoiled” by subsidies. They forgot that Harapan had only obtained 25 to 30 percent of the Malay vote in 2018, added Jeyakumar.

The result was that Umno and PAS successfully portrayed Harapan as being “anti-Malay” and leaders in Bersatu began to panic and wobble. And of course, this also allowed Najib to rebrand himself as the “true protector” of the Malays.

The majority of fed-up Filipinos, including the middle class, have repeatedly said in surveys that they would support “a strong leader”, who does not have to bother with elections, to “fix” their country’s mess. In other words, they want a good-hearted dictator. Or a magician.

In Malaysia, many expected a miracle, an instant “heaven on earth”, after Harapan won in 2018. Sadly, both Malays and non-Malays ended up disappointed and now some feel there’s “no point” in voting. Perhaps this is exactly what will allow Najib and gang to return to power.

So, there we have it, the chilling similarities between Malaysia and the Philippines, between Najib and the Marcos family. Will we learn the right lessons from them?