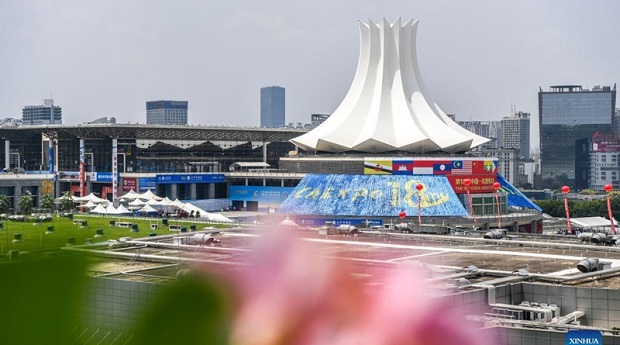 While China-related topic is expected to dominate the upcoming US-ASEAN summit, a recent survey  showed that nearly 80 percent of Chinese respondents said the US is the biggest disruptor of the sound relations between China and ASEAN members but about 90 percent  considered the China-ASEAN ties as friendly and over 75 percent hold a positive attitude toward their future.

The survey was jointly conducted by the Global Times Research Center and Centre for Chinese Foreign Strategy Studies, Renmin University of China between March 15 and April 15 in 31 Chinese provinces, regions and municipalities among the general public aged 18 to 69 and college students. It collected 2,012 valid questionnaires from the general public and 1,150 from college students.

About 61.8 percent of the respondents said they have a good impression of ASEAN, and those who have visited ASEAN members share high scores in terms of the impression about the region. On average, the level of affection of the Chinese public toward ASEAN, with a 3.8 score, is much higher than the other blocs and countries. The level for the EU is 3.2 and that for the US is 2.4.

Most of the college students are impressed by the ASEAN’s rich resources and culture. They also share a higher level of affection for the region than for the US, EU, Australia, Japan and other countries and regions.

“Those results showed that China and ASEAN have developed very successful relations in the past two to three decades,” Lü Xiang, research fellow at the Chinese Academy of Social Sciences, told the Global Times. This results from  the ramped-up efforts of China’s diplomacy toward Southeast Asia.

The survey also shows that although fewer Southeast Asian countries share divergences with China on questions like the South China Sea, those conflicts are under control, and have not become “the mainstream tone” for bilateral ties. The Chinese public supports and trusts China’s policy and its relations with ASEAN, Lü said.

Although 10 ASEAN members share  vast  differences, China has been handling the relations with them pretty well, either from  diplomatic efforts or the infrastructure cooperation under the China-proposed Belt and Road Initiative, which all laid the foundation for the positive momentum in China-ASEAN ties, experts said.

Some 90.4 percent of the respondents said China-ASEAN relations are “friendly” and over two-thirds took it as “very friendly” and “relatively friendly.”

“Those survey results are in line with Chinese people’s objective perception of the development of China-ASEAN relations,” Xu Liping, a research fellow on Southeast Asian studies at the Chinese Academy of Social Sciences in Beijing, told the Global Times recently.

In China’s neighboring diplomacy, ASEAN occupies a very important position, Xu said, noting that ordinary Chinese will have a higher degree of favorability and affinity for ASEAN, compared with Europe and the US.

“This objectively shows that there is a strong internal driving force for the development of China-ASEAN relations, and strengthening cooperation and friendly people-to-people exchanges will continue to be the mainstream of bilateral relations,” he said.

In responding to the question about “whether China and ASEAN can properly handle the South China Sea question,” 26.9 percent of the respondents said the two sides can always handle it well while 67.3 percent believed that although there are divergences, they can generally handle it properly, the survey showed. It also means that 94.2 percent of the respondents hold a positive attitude toward the two sides handling the South China Sea question well.

In recent years, the US has been provoking and stirring up conflicts between China and ASEAN members on the South China Sea question. It uses the so-called Indo-Pacific Strategy to pressure ASEAN members to decouple with China, curbing China’s growth in the region, Xu noted.

“The US is an obvious disruptor,” he said. The survey shows that the Chinese public has a clear awareness of such a trend, he noted.

From the Obama administration’s pivot to Asia to the Biden administration’s “Indo-Pacific Strategy,” it’s also obvious that the US has been lobbying around ASEAN and trying to integrate it to its anti-China alliance, Lü noted.

“However, ASEAN members have been avoiding ‘taking sides’ between China and the US, which accords with China’s stance and interests,” he said.

The survey also shows that the majority of the respondents attach importance to economic cooperation between China and ASEAN, followed by the public health sector. In emerging industries, most of them value energy and green development cooperation.

ASEAN and China reaffirmed their commitment to further strengthen their partnership and cooperation in line with the ASEAN-China Comprehensive Strategic Partnership (CSP) established in 2021, as officials of both sides met at the 23rd ASEAN-China Joint Cooperation Committee Meeting in April 2022.

The meeting also discussed developments in ASEAN and China and the continued progress of cooperation over the past year. Substantive progress has been made in various areas of the ASEAN-China Plan of Action 2021-2025, such as trade, ICT, digital economy, education, public health, culture and information, media, environment and sustainable development, and narrowing the development gap.

In the education sector, 88.4 percent of the college students surveyed showed a positive attitude toward exchange activities with universities in the region. Activities related to culture and arts are considered the most popular ones, as 61.6 percent of the respondents mentioned, followed by language study activities.

While the Chinese public shares high interests in ASEAN members, Singapore has become the country that attracted them the most. The average score of affection and interest for Singapore is above 4, with the highest score of 5, followed by Malaysia and Thailand , which both scored 3.8.

Chinese students are most attracted by Singapore, and then Thailand and Malaysia.

“Such interest in Singapore is in line with the general perception,” Lü said. He noted that as a Chinese-dominated society, Singapore shares many similarities with China.

Especially in recent years, Singapore’s attitude toward China has been changing with the rise of China’s national strength, reflecting the country’s constant adjustment in its diplomatic stance in line with the global situation and trying its best to avoid becoming a “pawn” of the US in containing China, the expert noted.

Singaporean academic and former senior diplomat Kishore Mahbubani was quoted as saying in a report by NPR that Southeast Asia is less interested in talk of “freedom” and “openness” and more about the material needs of the region and its recovery from the devastating impact of the coronavirus pandemic.

The US emphasis on defense and security may not be the best guarantee of its long-term interests, Mahbubani noted. The more that America spends on its military, the less effective it will be in the long run in dealing with a far stronger and bigger Chinese economy, Mahbubani was quoted as saying in the NPR report .

Mahbubani noted that China has already leaped over the US in terms of trade and economic engagement in Southeast Asia. 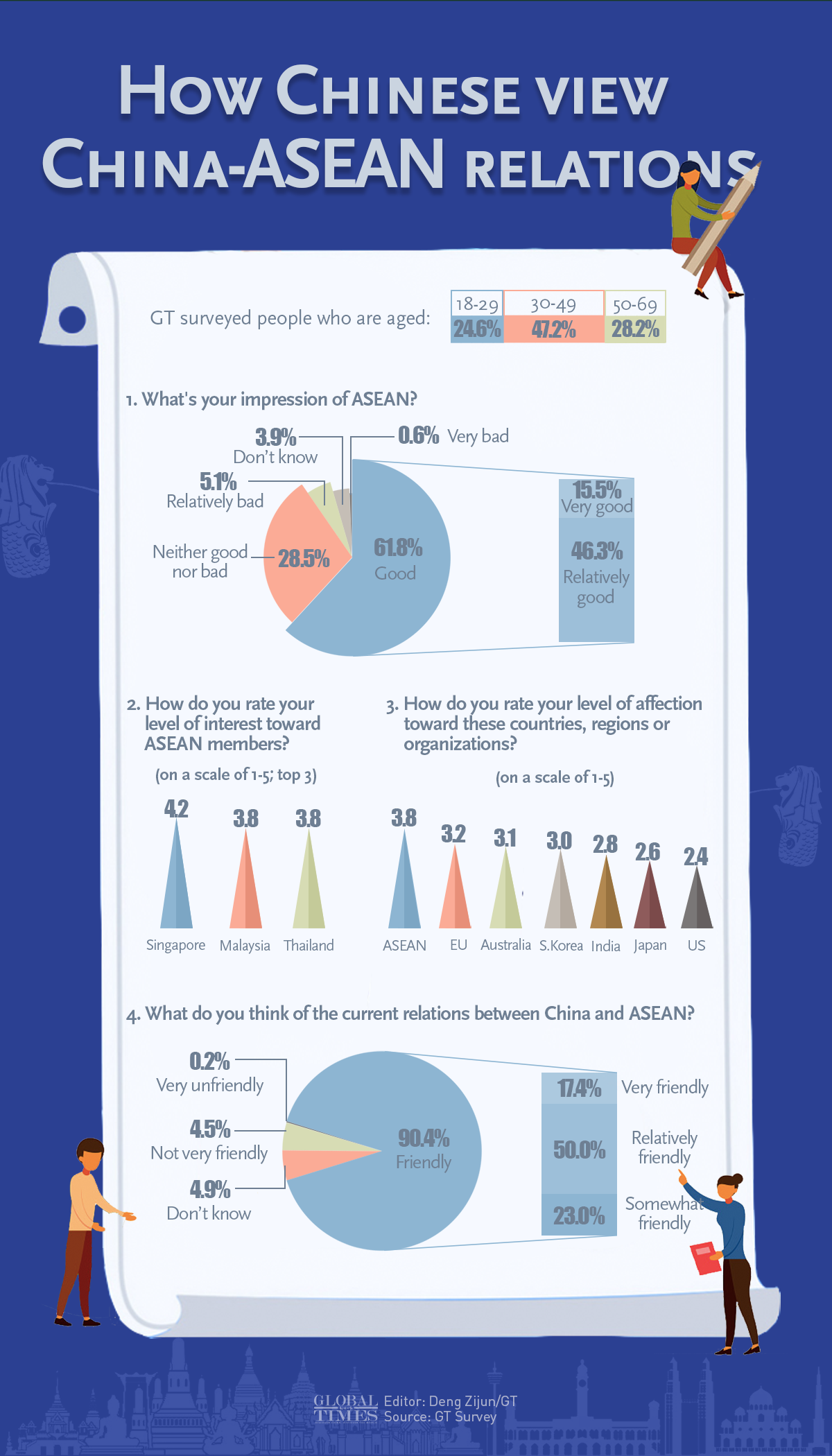 ASEAN remains China’s largest trade partner, accounting for 14.6 percent of China’s total foreign trade in the first four months of 2022, with the EU and the US ranking second and third, according to the latest Chinese  customs data released on Monday.

While Singapore, Malaysia and Thailand were the three countries considered to be the most friendly with China, as the GT survey showed, nearly 96 percent of the respondents said they support China and ASEAN to further develop friendly neighborly relations.

The Chinese public will better understand those countries with more economic and cultural exchanges with China, and it’s not strange that Chinese people are interested in the above-mentioned three Southeast Asian countries as the tour packages of those three are the most common in China, experts said.

“It’s believed that with the further development of the Belt and Road projects, the public will know other ASEAN members better, with a more favorable attitude,” Lü said.  GT 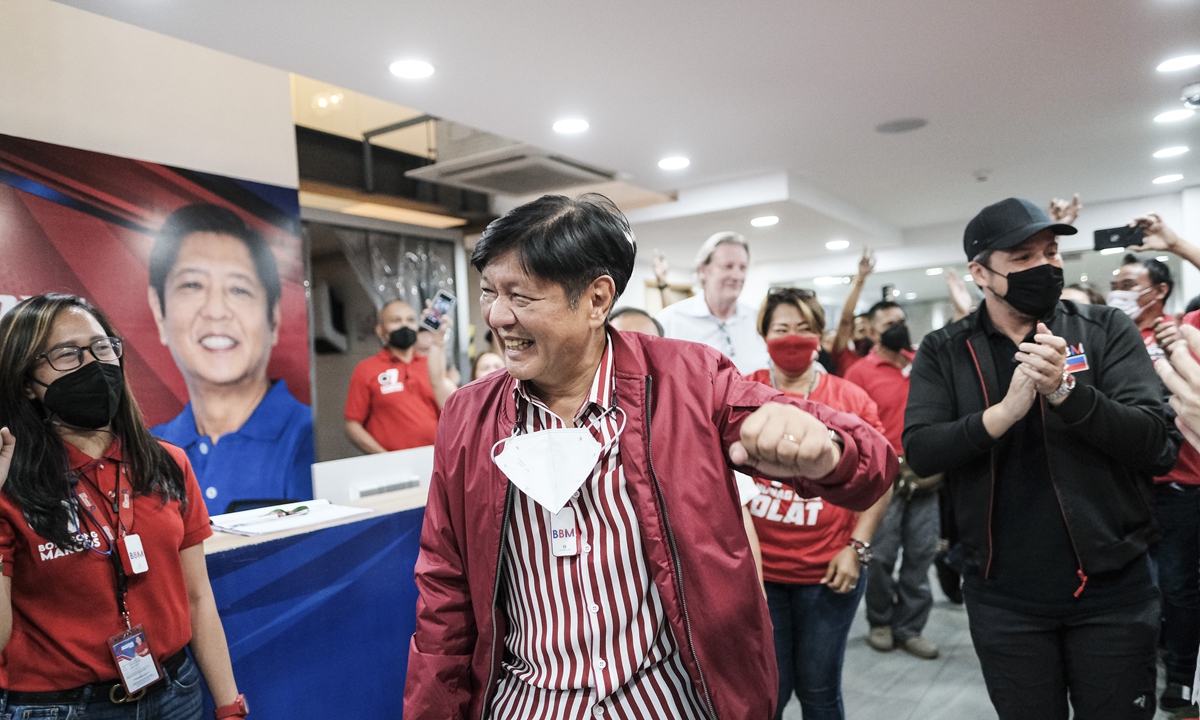 US and Western public opinion generally labeled it as “the most important election in the Philippines over the four decades,” and believe that the election result will affect the direction of the Philippines on Washington’s “Indo-Pacific chessboard.” They have tried to interfere and guide the Philippine electoral agenda from the very beginning of the election. For example, they simply and rudely categorize candidates as “pro-US” and “pro-China,” underlining that this is a “contest of values,” and hyping that all candidates except Marcos Jr. are “in tough stance” on issues of the South China Sea. These “hints” are so stark that they almost lecture Filipino voters how to vote.

Marcos Jr. made it clear that he would not lean to either China or the US, and would only be “pro-Philippines.” He has repeatedly expressed his desire to develop relations with China, called for a solution to the South China Sea issue through dialogue and described China as a “friend.” These remarks suggesting his reluctance of taking sides have stimulated some forces in the US and the West. As a result, some US and Western media outlets labeled him as the “son of a dictator.” After Marcos Jr. secured the win, they warned that “kowtowing to China” would put the Philippines once again “in a weak position.”

Frankly speaking, these expressions are quite rude, implying extreme disrespect and even humiliation of Filipinos as well as contempt for the country’s sovereignty.

In the eyes of some arrogant people from the US and the West, it seems Filipinos should only care about the “China threat” and US Indo-Pacific Strategy. And if the people of a country don’t make the “right choice” as Washington wants, it shows the “fragility” of that nation’s democracy.

Calling its allies and partners, Washington is eager to stir up trouble in the South China Sea. But these forces are becoming increasingly “pretentious” in the region. In this year’s presidential election, Marcos Jr. was supported by a large number of young Filipinos who care the most about the economy and employment rather than the dogmatic “values” of the US and the West.

Marcos has rich experience in local governance with good record among governors in the Philippines. Some US and Western media portrayed his victory as a “victory for Beijing,” pretending not to see Filipinos’ desire for national unity and development – such a yearning is strongly supported in Southeast Asia.

It’s clear that the US is taking advantage of the Philippines while not giving it the respect it deserves. The US is unwilling to truly spend any money to help the Southeast Asian nation’s development, but still constantly interferes in the latter’s internal affairs. In fact, Washington has never treated Manila with sincerity. It sometimes has to make the gesture of roping in the Philippines due to its geopolitical value. This makes US policy toward the Philippines erratic, contradictory and hypocritical. Refusing to be a tool for the US to contain China, Duterte eased relations with China after taking office. This has proven to be more in line with the Philippines’ national interests. It is also what Filipinos want to see.

It is worth noting that it is a discourse trap that the US and Western media labeled Duterte or Marcos as “pro-China.” That word has been twisted by US and Western media into “kowtowing to China.” In fact, they want to use the label to hinder and intimidate goodwill and rationality toward China in the Philippines and drive a wedge between the two countries.

China respects the choice of the Philippine people. China-Philippine relations are based on the fact that the two countries share common interests. We hope that both sides will continue to create new opportunities for common development and bring more practical benefits to the people of both countries while enhancing peace and stability in Asia.