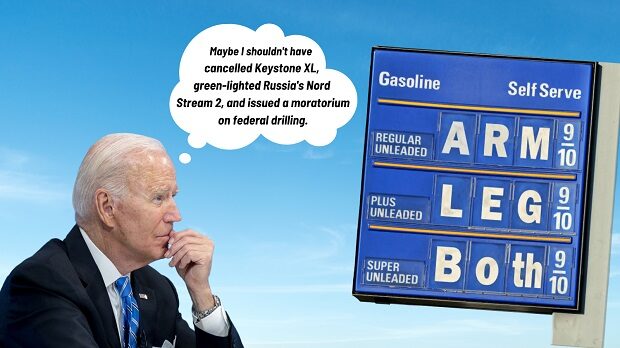 Conservatives on Twitter were not buying President Joe Biden’s recent speech assessing the pandemic and Russian President Vladimir Putin’s invasion of Ukraine as the two main issues behind the United States’ economic woes.

Around noon on Tuesday, Biden addressed the American public on the state of the economy. In addition to saying that his administration has made “extraordinary progress” with the economy, Biden blamed all economic hardship on COVID-19 and Russia.

“I want us to be crystal clear about the problem,” Biden stated. “There are two leading causes of inflation we’re seeing today. The first cause of inflation is a once-in-a-century pandemic. Not only did it shut down our global economy, it threw the supply chains and the demand completely out of whack.”

SEN. RICK SCOTT HITS BACK AT BIDEN’S ATTACKS: HE TOOK NO RESPONSIBILITY

He then explained the other cause. “And this year we have a second cause, Mr. Putin’s war in Ukraine.” He added, “We saw in March that 60% of inflation that month was due to price increases at the pump for gasoline.”

In response to reporters’ question about taking any “responsibility” for inflation, Biden stated, “I think our policies help, not hurt.”

Exasperated with the Biden narrative that blamed external forces for inflation, conservatives took to Twitter to mock the president’s words.

“This is what Joe Biden’s policies have done to prices in just one part of the economy,” tweeted Townhall.com editor Spencer Brown, along with an infographic of the national average gas prices.

Shortly ahead of the speech, Sen. Ted Cruz, R-Texas, shared a Reuters article claiming that Biden will blast Republicans for having no plan to stop inflation during the speech. He captioned the post with his own assessment about how Biden is harming the economy.

Writer Kyle Becker blasted the entirety of Biden’s address, tweeting, “Biden is lying about his ‘solutions’ for inflation and the non-existent Republican plan for a ‘middle class tax hike.’ This gaslighting won’t work because the policies won’t work.”

“Joe Biden will blame anyone and anything for inflation,” tweeted MRCTV’s account.

Washington Free Beacon reporter Joe Gabriel Simonson mocked one of Biden’s proposed inflation solutions, tweeting, “I am enjoying Biden acknowledging that higher taxes — which sucks money out of the economy — could theoretically ease inflation. excited to see where this thought takes him.”

Conservative commentator Greg Price tweeted, “Biden says that he is taking inflation ‘very seriously’ before once again blaming it on covid and Putin.”

Breitbart White House correspondent Charlie Spiering tweeted similarly, writing, “’I want every American to know I’m taking it seriously,’ says Joe Biden about inflation before blaming the pandemic and Putin for all of the problems.”

In another tweet Spiering described Biden’s address as a “Very defensive speech,” and added, “So far Joe Biden hasn’t offered a single new solution to inflation even though he says it’s his ‘top domestic priority’ A lot of shuffling and rehashing of previous efforts.”