From Cheap Money To Ukraine War – How The U.S. Screws Up Its Inflation, And Scrambles To Prevent A Global Recession

Federal Reserve Chairman Jerome Powell, speaking during a news conference on May 4 to raise interest rate by 50 basis points, has signalled that the Fed could continue to approve increases of half a percentage point. Investors, however, spooked by earlier speculations that the rate could be up to 75 basis points, did not pay much attention. The U.S. stock markets hit the roof.

But is a 75 basis points hike any worse than multiple 50 basis point hikes? The next day, the stock markets reversed the gains and suffered the “worst day”of the year. The Dow Jones Industrial Average lost over 1,000 points (3.1%), while the S&P 500 and Nasdaq Composite fell 3.5% and 4.9% respectively. The biggest one-day gain (932 points) since 2020 evaporated. 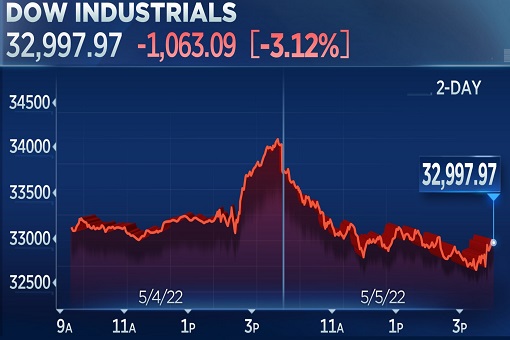 Investors and analysts suddenly realized the mistake of chasing the stocks. The 50 basis points, the sharpest rise in interest rates in over 20 years, was just the beginning. The Federal Reserve said the central bank needs to take more aggressive action to fight high inflation. The Fed is expected to keep hiking the rate until it reaches a range of 3% to 3.25%, up from zero to 0.25% earlier this year.

The U.S. inflation rate accelerated to 8.5% in March, after hitting 7.5% in January and 7.9% in February – the highest in 40 years. Half way across the globe, Britain knew the problem and was just awaiting the Fed to start the ball-rolling. Not only the Bank of England raised its interest rate to the highest level in 13 years, it has also forecasted its inflation would jump above 10% this year – the highest level since 1982.

That means both the U.S. and the U.K. are being hit with a 40-year-high inflation rate. Essentially, Americans will start to see higher borrowing cost, which means  higher interest costs for mortgages, business loans, credit cards, student debt, car loans and whatnot. This also means millions of Americans will start to see, if it has not already started, high cost of living.

The last time the Federal Reserve raised rates by 75 basis points was in 1994. Theoretically, Powell should have raised the rate by 75 basis points on Wednesday (May 4). Doing so will melt the stock markets, hence the Fed only raised it by 50 basis points. But did it help the markets so far? Nope, the stocks are bleeding – slowly but surely. It was just part of psychological games.

Powell’s dismissal of three-quarter point hikes was deliberately done to pacify investors and calm the stock markets, but in the process the Fed could risk prolonging the problem of inflation. To be fair, the Fed has no idea whether it could tame the inflation without causing a recession. In truth, it was trial and error. It doesn’t know whether 50-basis-points or 70-basis-points will fix the problem.

But one thing is for sure – the Fed was too slow. And if the 50 basis point hike is too little too late, both the U.S. and the world’s economy will be in a bigger problem. Inflation hawks argue that the problem is pretty simple. The inflation rate has jumped to 8.5% and the benchmark interest rate is just 1%. So, to offset the inflation, you need to hike the interest rate to at least 7%.

The tricky part, assuming the theory by the inflation hawks is correct, is how to perform a “soft landing” for the U.S. economy without triggering a recession. That’s where the Fed has to figure out the quantum of interest rate hikes. The bad news – history suggests that it won’t be able to prevent a recession. Since 1950s, the U.S. economy always ended with recession every time inflation exceeded 4%. 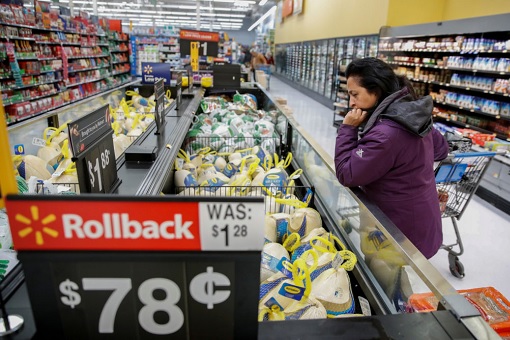 The Federal Reserve has two jobs – keep inflation under control and maximize employment. Powell was supposed to have raised the interest rates last year when the acceleration of price began. But he didn’t, preferring to wait and see. However, at the same time, inflation is not the problem of the Federal Reserve alone, but also the government policy makers.

For years, under pressure, the Fed had been insisting that the high inflation was temporarily in order to justify an interest rate near zero because the White House wanted to make Americans feel rich by allowing them to borrow and spend. Even before the Covid-19 pandemic, the Fed was responsible for flushing the financial markets with cheap money – about US$120 billion a month – since 2018.

Donald Trump was well known for harassing and intimidating the Fed on multiple occasions to lower its benchmark overnight borrowing rate, even when the rate was already at an incredibly low level. In Oct 2019, for example, just a day after Jerome Powell lowered interest rate by 25 basis points to a range of 1.5% – 1.75%, the U.S. president slammed the Fed as a bigger problem than China.

Trump wanted the Fed to push interest rates down to zero – or even into negative territory – because that was the only way the U.S. knew how to make the country competitive against other countries. Of course, Trump wanted everyone to dump their money into stock markets so that he could brag how he was the greatest president based on the “endless bull market”.

Hilariously, the United Kingdom copied the same model, keeping its interest rate at all-time low of 0.1%. Like the U.S., who kept saying the high inflation was temporary, despite hitting 5.4% against a 2% target as early as November 2021, the U.K. too said its inflation was under control last year at 3.1% (which skyrocketed to 7% in March 2022 – highest since 1992).

And whenever there was any stock market sell-off, it made the Fed’s job more difficult. Even when the writing was on the wall that an interest rate hike was inevitable, for months, the Federal Reserve under the leadership of Chairman Jerome Powell was indecisive over how aggressive it should be in tapering asset purchases and raising interest rates. Again, he waited.

All hell broke loose when the Coronavirus arrived. Both the federal and state governments flushed Americans with more cash. People stuck at home, but with more funds at their disposal and fewer options to spend – they dumped their money into stock markets or mutual funds. Stimulus checks, rising stock markets and fewer spending choices led to a massive savings boom.

At least US$6 trillion has been given away to boost people’s savings during the pandemic. However, according to a study from Oxford Economics, out of US$3.7 trillion in savings, 70% of the gain went to the wealthiest 20% of Americans. By February this year, a survey done by the New York Times showed only 16% of respondents said they had more in savings than before the pandemic. 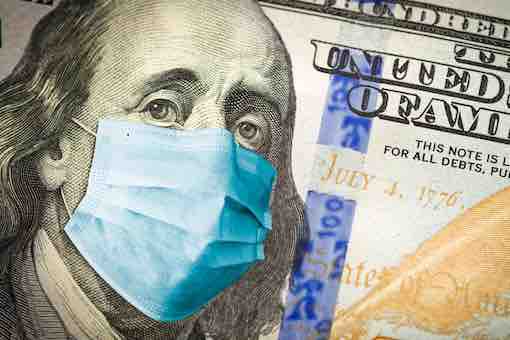 And like Washington, London has accumulated lots of debts through quantitative easing (QE). The U.K. government has more than £2 trillion (US$2.5 trillion) national debt. The Bank of England has added a whopping £800 billion of government debt as a result of its own QE asset purchases, designed to stimulate demand during the outbreak of Covid.

The U.S. trade deficit in goods topped US$1 trillion for the first time in 2021 as Americans continued to spend heavily on computers, toys, clothing, pharmaceuticals and other goods. Imports surged by US$576.5 billion, or 20.5%, largely from China. Again, both the trade war and trade deal initiated by Trump didn’t work as the “pandemic economy” saw Americans purchased more Chinese products.

To make matters worse, Biden administration miscalculated the economic impact of a Russian invasion of Ukraine. The war can be easily avoided if the Europe announced the admission of Ukraine as a member of NATO required more time to consider. But ego and arrogance got the better of the Western powers. Adding fuel to the fire, the West provoked Russia to invade.

It was already bad that the labour market was experiencing a shortage of workers, leading to demand for higher wages. Low interest rates further encouraged big purchases, driving up costs. The additional costs were passed down to consumers. When Ukraine was finally invaded, energy prices, including crude oil and gasoline, instantly jumped to a new level.

But the biggest nightmare was the supply-chain disruptions that spread across the global economy. Both Russia and Ukraine are huge producers of agricultural products like wheat, barley, grains and rye that are badly needed by Europe. And because 71% of its land is agricultural, Ukraine is considered the “breadbasket” of Europe. Ukraine is the fifth largest exporter of wheat – 7% of global sales.

While Russia is the world’s biggest exporter of wheat (18% of global exports), Ukraine is the biggest exporter of seed oils. As the Black Sea is under Russian’s control now, 95% of Ukraine’s wheat cannot be exported, creating a global shortage. Combined, Russia and Ukraine exported more than a quarter (25.4%) of the world’s wheat, ingredient to make bread, noodles, pastries and cereal.

Sunflower oil is the world’s third most traded vegetable oil after palm and soybean oil. And Ukraine and Russia accounts for 46.9% and 29.9% respectively of global exports of sunflower oil. On top of that, Ukraine is also a huge exporter of corn. About 16% of global corn exports comes from Ukraine.

Besides European countries, Middle East and Africa also rely on Ukraine’s wheat and corn. So, together, Russia and Ukraine supply more than 25% of global wheat exports, 80% of sunflower oil exports and almost 20% of corn exports. That explains why the U.S. wheat, corn and soybean prices, which were already sky high, skyrocketed after Russia launched an invasion of Ukraine.

Even if the volatile food and energy prices are excluded from the picture, the inflation is still in a very bad shape. Without those two categories, the CPI (Consumer Price Index) is still up 6.5% – the largest gain since August 1982. Meaning before even Vladimir Putin began the invasion of Ukraine, the U.S. has already done a marvellous job screwing its own inflation.

Crucially, the March’s inflation rate of 8.5% was driven by high jumps in prices of food, gasoline and home, directly affecting bottom 80% of American households. If Russia, who currently enjoys an extraordinary revenue from high prices of energy, chooses to prolong the Ukraine war indefinitely, more economic damages could emerge.

Look no further than the stock markets to get an idea the effect of inflation. Amazon reported its first quarterly loss in seven years, while Netflix has started losing subscribers. The automotive industry is facing tough earnings season. Both Facebook and Google reported profit drops. The best part is, despite the latest rate hike, the U.S. isn’t sure whether the inflation has peaked.