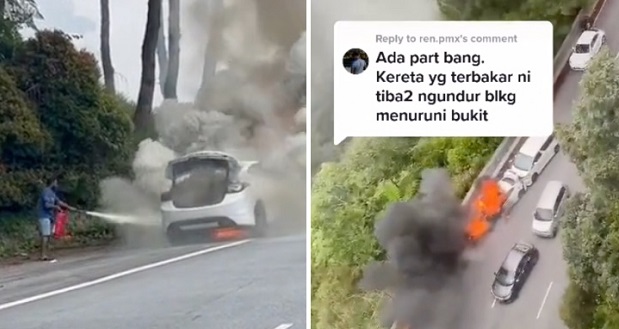 Car bursts into flames on road to Genting

PETALING JAYA: A car carrying a couple and their two children burst into flames and slid backwards down the road to Genting Highlands before hitting and stopping in front of an SUV yesterday afternoon.

The driver of the vehicle stopped the car when he noticed the fire and shouted to his wife and children to get out, according to a China Press report.

The family quickly grabbed their belongings and exited the car before it started sliding backwards down the slope.

A video of the incident showed the car rolling about 50m down the road as other vehicles and pedestrians hurried out of its way before it collided with an SUV that could not evade it.

The fire department said nobody was hurt in the incident, which happened at about 1.45pm.

Firemen went to the scene and put out the flames about an hour later.

The department’s forensics unit is investigating the cause of the fire.

Pictures and videos of the incident were widely shared on social media platforms.