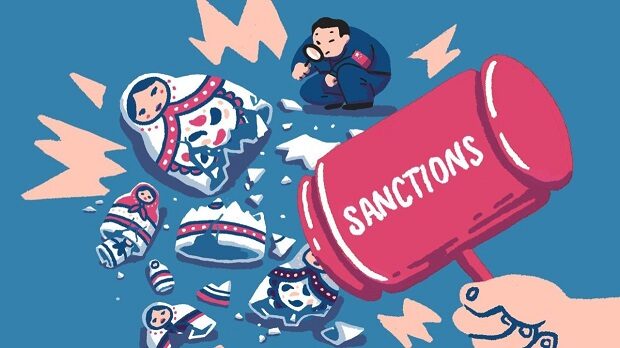 Punishing the world’s second-largest economy with destructive financial and economic sanctions – such as expelling China from the international Swift payment system and freezing foreign reserves – had never been publicly considered an option by Washington.

But that changed when they were levied against Russia for its invasion of Ukraine.

Now, the breadth of those sanctions, and the speed at which they were applied, have given Beijing a glimpse of what it could face if it offers support to Moscow or tries to forcefully reunify Taiwan with the Chinese mainland.

Do you have questions about the biggest topics and trends from around the world? Get the answers with SCMP Knowledge, our new platform of curated content with explainers, FAQs, analyses and infographics brought to you by our award-winning team.

However, Russia is no China, whose economy is about 10 times larger and much more closely intertwined with the rest of the world.

China remains highly dependent on foreign trade and has the world’s largest foreign exchange reserves – worth US$3.25 trillion – much of which is stored in the United States and Europe.

“The expansive economic sanctions that US-led Western countries have imposed on Russia can be seen as a textbook warning for China – on how far [the sanctions] can go,” said He Weiwen, former economic and commercial counsellor at the Chinese consulates in New York and San Francisco.

Some say the economic impact could be much more debilitating for China.

“Once sanctioned, China would be hurt far more than Russia,” said a Beijing-based European diplomat on condition of anonymity. “China is worried and doesn’t have many tools [to counter the impact of sanctions].”

On the other hand, China has carved out such a strong foothold in the global value chain that analysts say it would be extremely difficult, if not impossible, for more than 120 countries and regions, including the United States, to sever ties entirely with their top trade partner.

The effects of any sanctions are mutual. We have assets in the US and Europe, and so do they in China
Lu Xiang, Chinese Academy of Social Sciences

He, who is now a senior fellow with the Centre for China and Globalisation (CCG), a Beijing-based think tank, said: “China and the US have a stake in each other, so for the US, China is totally different from Russia. The political calculations will inevitably be restrained by economic conditions.”

Lu Xiang, a senior fellow with the Chinese Academy of Social Sciences (CASS), also said that if the same sanctions were levied against China, they would have unintended consequences for the nation or global bloc imposing them.

“The effects of any sanctions are mutual,” Lu said. “We have assets in the US and Europe, and so do they in China.”

Some US sanctions will inevitably remain in place, and perhaps more will come, but the unfolding of the sanctions will follow its original pace, according to Shi Yinhong, an international relations professor at Renmin University and an adviser to the State Council, the country’s cabinet.

“A sharp and sudden escalation is quite unlikely,” Shi said.

More than two months into the Ukraine war, it has become increasingly difficult for Beijing to distance itself from the tension. While Chinese diplomats have been calling for a peaceful resolution, Beijing’s insistence on maintaining a neutral stance has come under fire from the US and its allies.

CIA director William Burns called China “a silent partner in Putin’s aggression” when speaking to students and faculty last month at the Georgia Institute of Technology.

But to trigger potential secondary sanctions against China, a generally acknowledged red line is the provision of weapons, even though Washington has been vague in its wording on this, saying there would be “consequences” if Beijing offered “material support to Russia’s invasion”.

“The United States is now playing with ambiguity,” said another Beijing-based foreign diplomat. “China also wants to know, clearly, under what specific circumstances it would be sanctioned.”

US intelligence has not found evidence of China selling weapons to Russia, according to Ned Price, spokesman for the US Department of State.

“We’re going to continue to watch very closely,” he said during a press conference on April 18. “We offered an assessment a couple of weeks ago now that we had not seen the provision of weapons, of supplies, and that assessment has not changed.”

Accordingly, the Chinese government, along with state-owned banks and enterprises that have business relations with Russia, have been adopting a very prudent approach since the war began, according to Professor Shi with Renmin University.

“Such a Western attitude [towards Russian aggression] has probably been fully anticipated by China, so to protect Chinese assets, I think so far, China has been acting very cautiously,” Shi said.

Legal sources told the Post that various state-owned enterprises in China, such as banks, oil companies and semiconductor firms, have been seeking advice on whether to continue their trade with Russia since the war began.

But as long as China does not provide munitions to Russia, secondary sanctions on China are a non-existent problem, said Wang Huiyao, founder of the CCG think tank and also a State Council adviser.

“China is conducting normal trade with Russia, and so is the EU,” Wang said. “The key point is that [the US] has no reason to impose sanctions [on China] because of the war.”

Meanwhile, US officials have been increasingly using the measures taken against Russia as a warning to China, suggesting that a similar playbook would be employed if China were to one day attempt to take Taiwan by force.

One US official told the Post that anyone who assumes the US would hold back on similarly powerful economic retaliation against Beijing – if it one day attacks Taiwan – is misunderstanding just how far and how quickly the conversation has changed in Washington since the Ukraine war began.

Beijing regards the island as a breakaway province that must be reunified with the mainland – by force if necessary. And tensions have risen in recent years as Washington shifted away from the one-China policy that had been the bedrock of Sino-US relations for four decades.

However, some Chinese government advisers have suggested that Beijing may be in no rush to take Taiwan by force.

“China absolutely does not tolerate Taiwan’s independence and foreign control of Taiwan, and the United States understands it very well. So, in terms of such a fundamental red line, I think [Beijing and Washington] have a clear understanding of each other.”

And as long as China maintains good relations with Asean countries, the US cannot make waves in the South China Sea – He Weiwen

As for Xinjiang and the South China Sea, it is not worthwhile for the US to impose the same level of sanctions that would jeopardise its own economy, said He, the former diplomat.

“For the US, Xinjiang is more of a pawn that they use to cause trouble for China while garnering international support. And as long as China maintains good relations with Asean countries, the US cannot make waves in the South China Sea.”

But as evidenced by the abruptness of the Ukraine war, surprises can pop up overnight, said Lu from the CASS.

“China has repeatedly made it clear to the United States that Taiwan is the most sensitive and important issue in the relationship between the two countries, and the US understands this well,” Lu said. “But will the US challenge China on this issue precisely because it understands the importance? We must also make various assumptions.”

Even with leverage, China must prepare for the worst

But that expulsion was a compromised version – energy trade has thus far been excluded from the punishment.

“The international payments system is just the international supply chains in reverse,” said Shahin Vallee, head of the Geo-Economics Programme with the German Council on Foreign Relations, in an article in March.

“It is not possible to cut off Russia from the international payments system unless one is prepared to cut it off from global supply chains – or, in this case, from energy supplies to Europe.”

Likewise, China’s biggest strength lies in its deep participation in the global supply chain, which also raises additional concerns for the US. If the actions taken against Russia were to be similarly applied to China, the US’ allies may be less likely to follow suit.

“The US knows well that Europe would be more reluctant to impose sanctions on China, because China-EU economic and trade relations are too close,” said the second foreign diplomat in Beijing.

Still, Beijing has to do everything in its power to ensure that China is not excluded from Swift, according to former Chinese government officials. There is still a long way to go for the Chinese yuan to reach the same level as the US dollar or euro, in terms of international standing.

“It is necessary to speed up the construction and external connection of the cross-border yuan clearing system CIPS … [But] the primary choice is to continue to strengthen cooperation with Swift,” said Wang Yongli, a former vice-president with the Bank of China and a former board member for Swift, in an article in March.

Meanwhile, a far stronger action taken by the US and its allies – freezing the Russian central bank’s assets held overseas – has not gone unnoticed by Beijing, as China has the world’s largest foreign currency reserve assets, most of which are in US dollars.

The huge foreign exchange reserves are hard-won, and they are China’s ‘financial nuclear bombs’ with a powerful deterrent effect.

The total value has been maintained at around US$3.2 trillion since 2020, more than double that of the second biggest holder, Japan.

There has been talk inside China of slashing its huge holding of reserves, but experts say this is not feasible, as a sudden change in the volume could have catastrophic consequences in global markets.

“The huge foreign exchange reserves are hard-won, and they are China’s ‘financial nuclear bombs’ with a powerful deterrent effect. It must be used properly rather than arbitrarily, and cannot be easily slashed,” Wang Yongli said.

“Of course, this does not rule out China increasing its purchase of gold or other strategic materials, or adjusting the currency and country composition of foreign exchange reserves, to further reduce its US dollar reserves, but we avoid this as much as possible to use it as a means of confrontation with the US.”

Indeed, China has been stepping up efforts to diversify its foreign exchange reserve assets in the past two decades, according to data from the State Administration Of Foreign Exchange.

One countermeasure China can take is to expand its economic and financial opening up to the outside world, and encourage foreign investors to hold more Chinese assets, according to Chinese government advisers.

Meanwhile, foreign multinational corporations are already prepared for a scenario in which China is sanctioned.

For instance, some may accelerate the implementation of an “In China, for China” strategy where goods are specifically produced for local consumption, according to the European diplomat who said China will hurt more than Russia if sanctioned.

Dan Wang, a technology analyst at Gavekal Dragonomics, said China is doing its best to mitigate any collateral damage from the Western sanctions against Russia, given China’s dependence on foreign markets as well as critical technologies such as chips, seeds and aviation.

“Efforts to increase self-sufficiency are under way, but China is unlikely to free itself within the present decade,” Dan Wang said.

“But once China decides it no longer needs Western technologies, it may no longer feel such restraint.”

“More importantly, if the China-US relationship is messed up, that does not augur well for Russia-US relations or the world.”